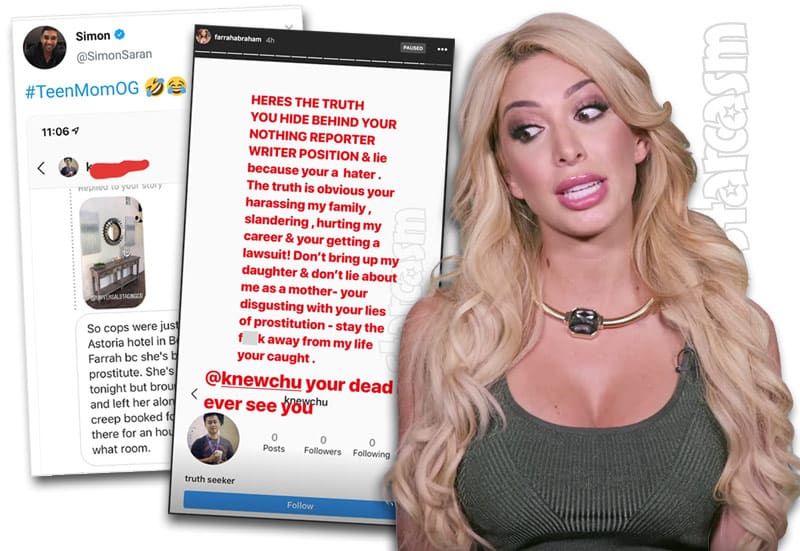 Rumors began to swirl this weekend about former Teen Mom OG star Farrah Abraham after her ex Simon Saran tweeted an Instagram DM conversation with someone claiming that police were at Farrah’s hotel in Beverly Hills because “she’s being a prostitute” and Sophia was reportedly left alone in her hotel room.

The Instagram account, which was initially @knewchu but has since changed to @charles.j.smith, claims to have spoken with TMZ repeatedly about the story, but there has yet to be any sort of article from the site. Clickbait site Champion Daily did run with the story, however, and it has infuriated Farrah!

Farrah tagged @knewchu in a post on her Instagram story along with an angry — and threatening — message: 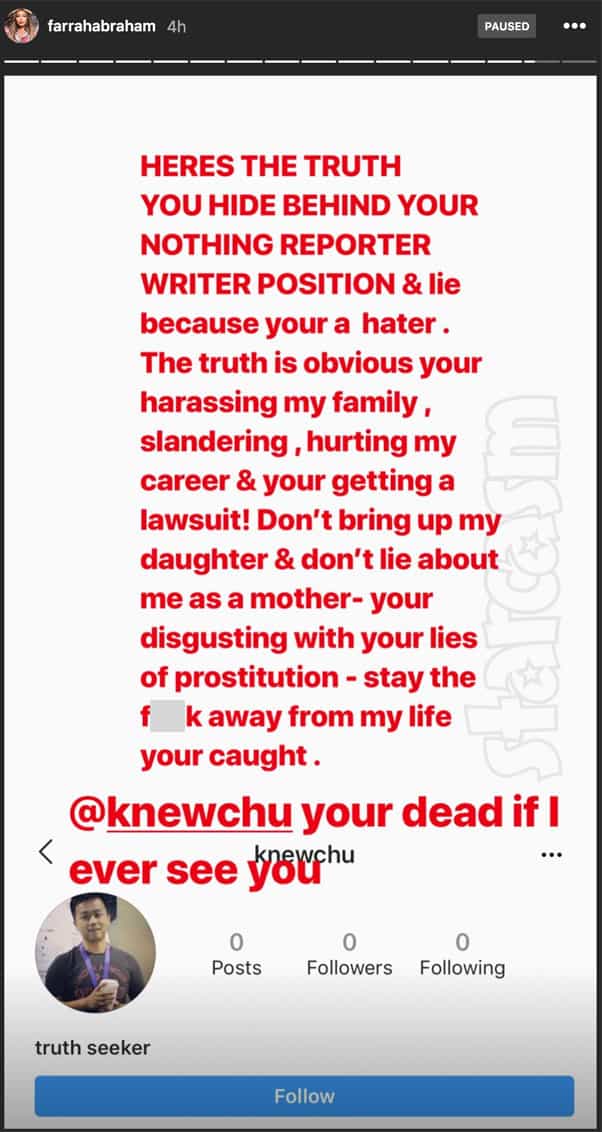 Yes, that does appear to be a death threat.

If you’re curious about what started everything — or at least what brought attention to @knewchu’s claims — here is Simon’s original tweet: 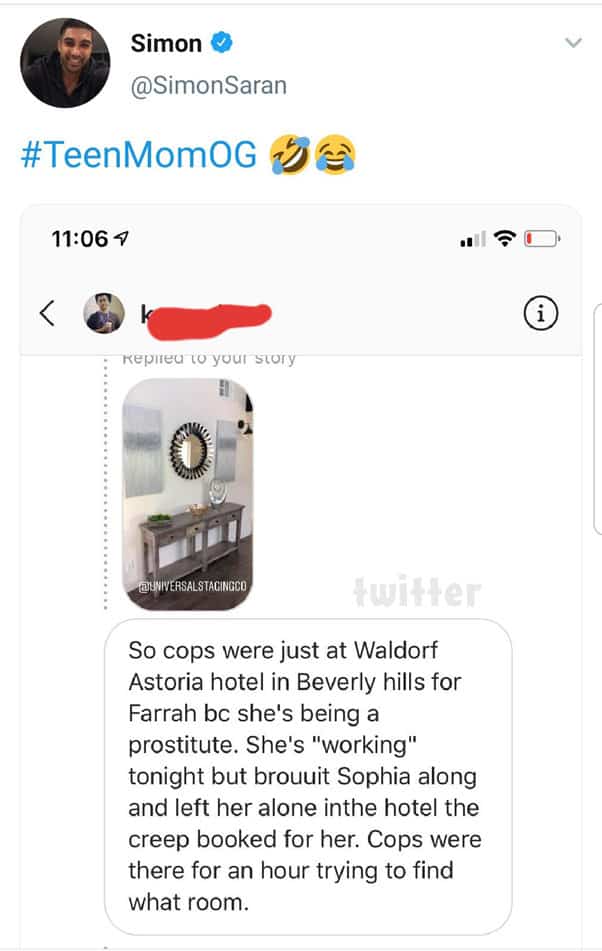 @knewchu has been obsessed with Farrah’s activities for a few weeks now, including her recent trip to Dubai. The account posts a series of photos and videos taken in Dubai that seem to link Farrah to professional soccer player Steven Taylor, who was involved in a headline-grabbing sex scandal last year.

The account also makes some bold claims about Farrah’s association with the Datingly app, which she has promoted often on social media.

The rumors from this weekend come on the heels of another clickbait Farrah prostitution story after her mother Debbie was asked about Farrah being a sex worker on Instagram. “Honest question: Does it make you feel like you failed as a mom knowing Farrah is selling her body in foreign lands for money?” a commenter asked Debra on June 26. “I don’t think it’s your fault, but I can’t imagine if my daughter chose this as a profession.”

“Not at all,” Debra responded. “God gave us each free will. I don’t do anything but what God puts in my heart. Love, empathy and wisdom are very important in life.”

I think that Debra’s answer was rather innocent and didn’t really implicate Farrah at all, but it kind of blew up on social media and in the media.

Farrah would later post a screen cap of her text message conversation with Debra about it in which Debra insists it was just a big misunderstanding: 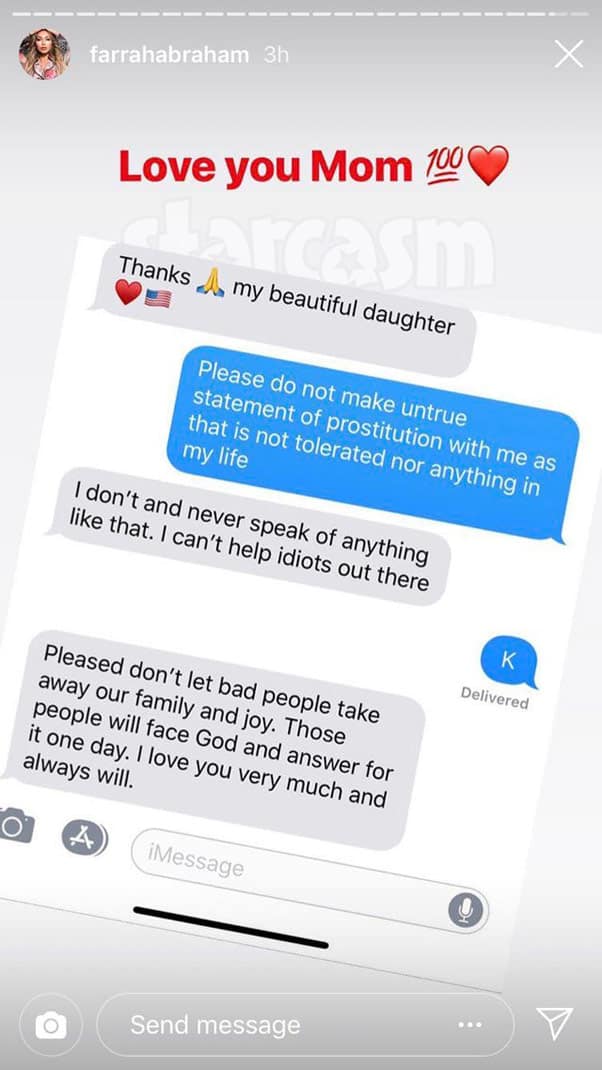 In news not related to Farrah’s alleged line of work, her daughter Sophia is now offering Cameo appearances for $50! The link is https://www.cameo.com/sophialabraham.

And if personal messages from Sophia aren’t you’re thing (or even if they are), you can also follow her on Instagram for lots of, um, creative videos like this one:

In Sophia’s recent Instagram stories post, she shared a couple of clips in which she appears to be pregnant and says that her mother was born with a condition called cuss words. At least I think that’s what she says. I’m beginning to realize I am clearly not Sophia’s target audience because none of this makes any sense! Too old, I guess.

Unfortunately, you can’t embed an Instagram story, so here is a screen shot: 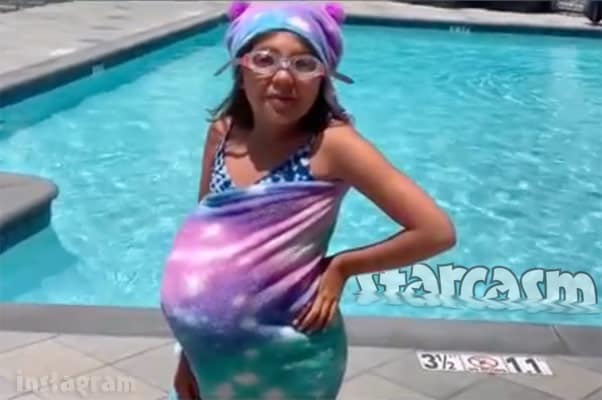 OK, that should get you all caught up on Farrah for now!