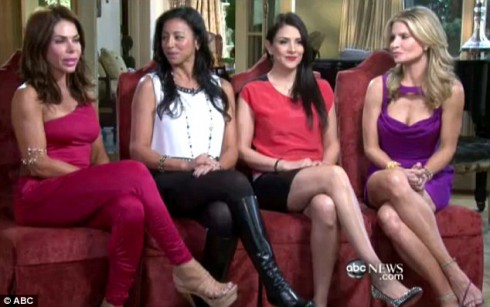 Liposuction? Just another day in the life?

A fourth breast augmentation surgery? Why not…

For the women of “Plastic Wives,” going under the knife for the sake of beauty isn’t a once-in-a-lifetime consideration — it’s an obsession. Now the ladies, who are each married to popular Hollywood cosmetic surgeons, are sharing their stories on a new TLC show.

“I’m very comfortable with the lifestyle I have and we’re always discussing our surgery so it’s better to show people that it is acceptable on TV,” Danya Devon, one of the wives said during an interview with Radar.

Devon added that she hopes the show will destigmatize plastic surgery. However, it’s pretty clear that the women of the show take advantage of their spouses’ resources.

“I am kind of addicted,” said Frances Marques, another of the four women, during an interview with ABC News. “I go there every day to the clinic.”

To most people outside of Beverly Hills, the procedures seem pretty extreme. But, the women all have their own validations for the nips and tucks. Devon, for example, was a former co-anchor on Extra, but she said it was hard to remain relevant in her profession after age 40. Now she does whatever it takes to look young.

“I wasn’t ready to hang it up yet,” Devon said. “I wanted to extend my shelf life a little bit.”

So, what do their husbands think about it all? Veronica Matlock explained her husband occasionally suggests that enough is enough. But, she knows how to change his mind.

Besides, the women consider themselves walking advertisements for their husbands’ services.

“If you’re looking for a plastic surgeon, look at his wife.” Devon said. “And that’s a perfect example of the work he most likely does.”

Is it acceptable to put a seven-year-old on a diet?