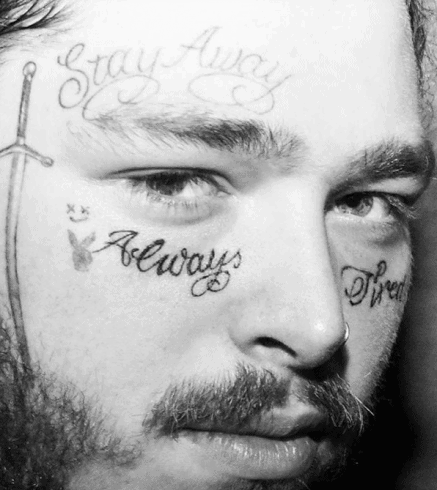 Rapper Post Malone has had a wild few days. First he won best new song at the VMAs and got to perform onstage with Aerosmith. Afterwards he partied with Cardi B and Travis Scott, and the next day boarded a private jet for London. That’s when things went horribly wrong. The pilot noticed that two tires blew on the plane, which meant it was almost destined to have a crash landing. Instead of traveling to London, the plane circled around New York for over four hours to burn off the massive amount of fuel it was carrying. Thankfully the plane landed safely and Post told TMZ he was ready for some beer, some wine and some beer and some wine mixed together to get over the nerve-racking experience.

23-yeah-old Post Malone has said that he first started getting facial tattoos to anger his mom. Once he got started, it seems he just can’t stop. Yesterday, before his airplane disaster, TMZ interviewed Post Malone about his face tattoos and asked him how he makes the decision about what ink to get.

He says their inspiration usually comes “about ten beers deep.” He laughed it off by saying he had a “face for radio” anyway. When asked if he think he encourages the (potentially future job-sabotaging) face tattoo trend, Malone denied any blame. He says the first person to get a face tattoo is to blame for this behavior. It’s probably only safe for your career prospects to get face tats if you’re a multimillion rapper, so keep that in mind when you’re 10 or 20 beers deep and near a tattoo parlor after an argument with your mom.

It looks like as of November, 2016 Post Malone had no tattoos on his face at all. Here he is at Sirius XM. His hands are pretty inked, however.

This photo inspired Justin Bieber to dig up a pic of Post without any tattoos at all, posing with Beiber’s little brother. Bieber didn’t reveal the date on this photo.

That’s pretty amazing, but what’s even more amazing is Post Malone performing in this music video for “Why Don’t You Love Me” before he was famous. Honestly it’s hard to tell what the best part of this video is – is it the jean cutoffs, the special effects, the unzipped Bad Boy jacket?

Below is a news report about Malone’s harrowing airplane experience on Tuesday.

And here’s Post Malone performing with Aerosmith at the VMAs Monday night. Iconic.