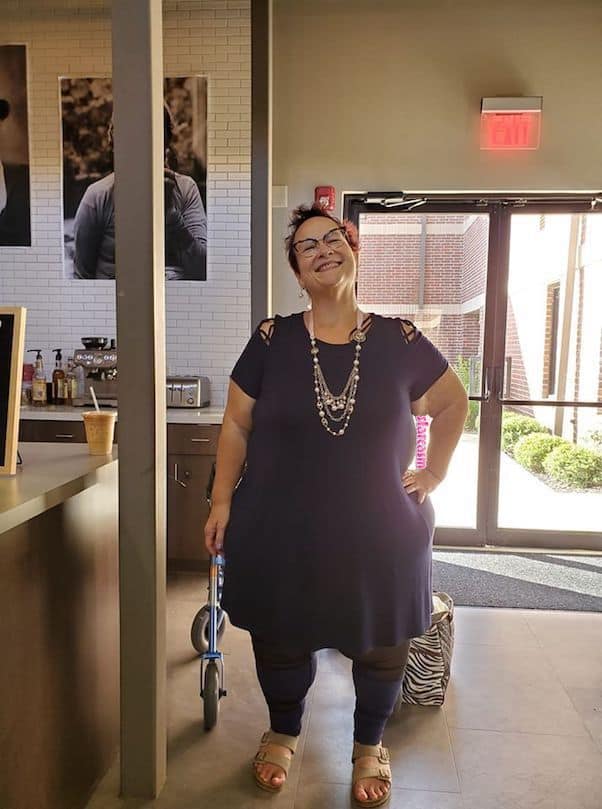 My 600 Lb Life and Where Are They Now? star Janine Mueller has has one of the show’s most successful weight loss stories over the past few seasons. So it came as quite a shock when Janine recently revealed she’s actually quit the series and will no longer be filming follow-ups, despite her first Where Are They Now? episode receiving widespread praise. In light of such a surprising decision, where is Janine Mueller now? What’s the deal with her boyfriend Doug? And why did she decide to end her involvement with the show?

Where is Janine Mueller now? Why did Janine quit My 600 Lb Life?

Janine didn’t give one specific reason for bidding farewell to the show. But she did offer several big hints. In her goodbye letter — which we’ve posted in its entirety below — Janine specifically mentioned her religious beliefs. Apparently, Janine’s thoughts on God were edited out of her episodes, but she’s now free to share them at will.

The literal answer to the “Where is Janine Mueller now?” question is that she’s still in Houston. Janine, like many other recent My 600 Lb Life cast members, appears to have bid her hometown farewell in an effort at staying close to Dr. Nowzaradan.

But the figurative and arguably more important answer for Janine is that the Seattle native, who began her weight loss journey at 678 pounds before dropping below 300 this year, is at home with her personal savior. (Janine was all the way down to 281 pounds at her most recent weigh-in.)

“The TV show may have edited out everything I ever said about God,” Janine told her followers. “But I am here to tell you I would have never gotten half this far had He not carried me through this difficult time.”

Regardless of how she achieved it, there’s no arguing with Janine’s success. After her first episode back in 2018, Janine had lost 112 pounds, maintaining a positive attitude despite her limited mobility keeping weight loss surgery just out of reach. A little over a year ago, Janine had finally lost enough weight to undergo the surgery — and she’s been dropping steadily ever since.

What happened with Janine Mueller’s boyfriend Doug? Are they still together?

Simply put, Janine Mueller’s boyfriend Doug is no longer a part of her life. And Janine revealed just how complicated the timeline of her My 600 Lb Life episodes can be in discussing Doug alongside her decision to quit the show.

“I am no longer dating the man you saw on the show,” Janine explained. And it seems that while her relationship with boyfriend Doug had been a big discussion point for fans, the topic was less pressing for Janine: “We had actually broken up before the show even aired. No matter, he wasn’t right for me, but my heart holds dear for the one who is.”

But it sounds like Janine already has someone to hold dear — her beloved cat, Prince 🙂 Janine also offered a feline update, telling fans that Prince “is still with me and doing well.” Janine said she often threatens Prince “that he will soon get another roommate,” but then assures him that “he is my one and only right now.”

In the short period since she quit My 600 Lb Life, the Season 6 star has shared a ton of pics of Janine Mueller today. Before we get to her reality TV retirement announcement, we’ll share just a few of those photos.

For starters, the picture at the top of the article is the very most recent one that Janine has made public. She shared it in late October, pausing for a happy smile and another welcome reminder that despite her ongoing knee problems, Janine has lost enough weight to walk. (It looks like Janine’s long-wished-for knee replacement surgery remains on the horizon — unless the procedure is one of the things Janine Mueller now was referencing when she mentioned in her goodbye letter that she has “a couple other things in the works.”)

And speaking of things Janine can do now, how about take a trip by airplane and not hate every second of it? Here’s a pair of photos of the formerly air travel-loathing Janine looking very happy to be comfortable on an airplane while on vacation this autumn: 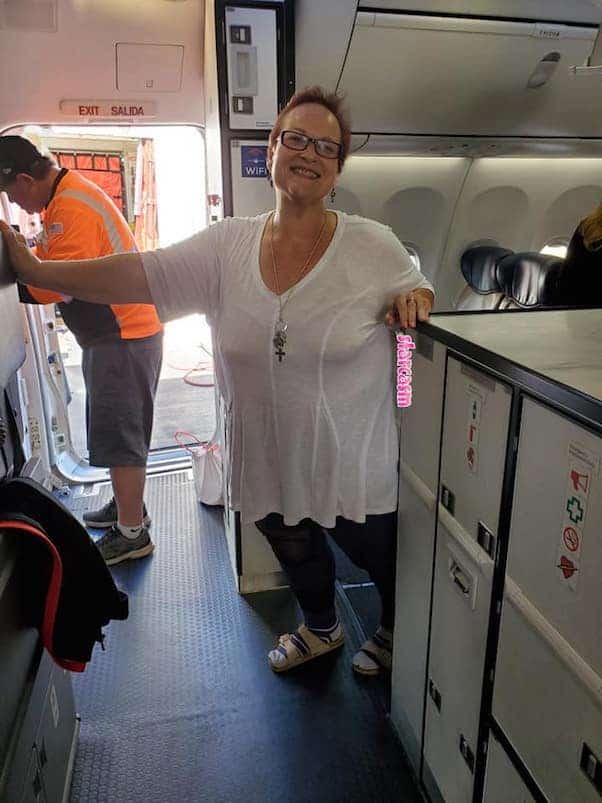 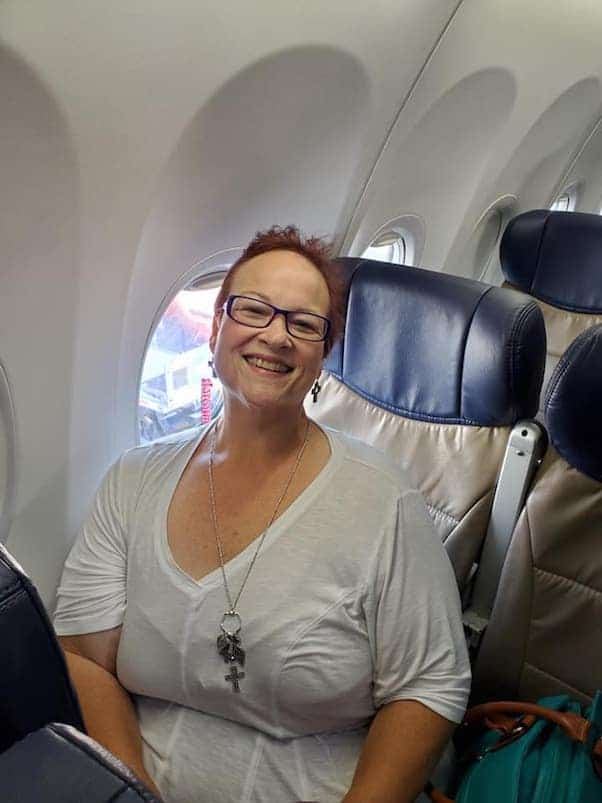 We still don’t know if Janine’s accidental weight loss reveal earlier this year had anything to do with her departure from the show. It could be that Janine had already told producers she was done for good by the time she let the figure slip; it could also be that producers told Janine the move had voided her contract and that she was essentially fired. For now, at least, all we can say to the question of Where is Janine Mueller now — how is Janine Mueller today? is that the now-former reality TV star appears happier and healthier than we’ve ever seen her.

Here’s Janine Mueller’s My 600 Lb Life alumna announcement in full, in both screenshot and transcript form: 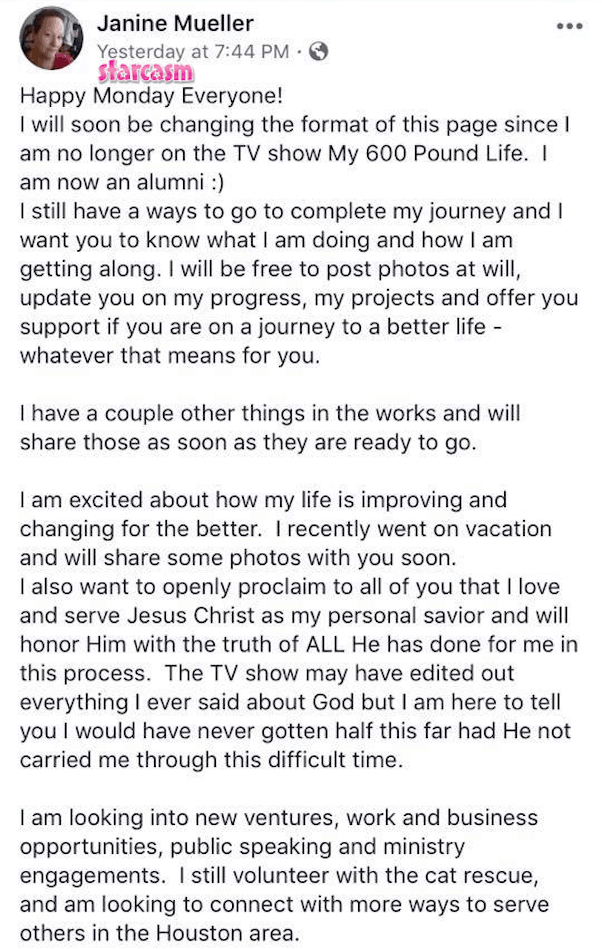 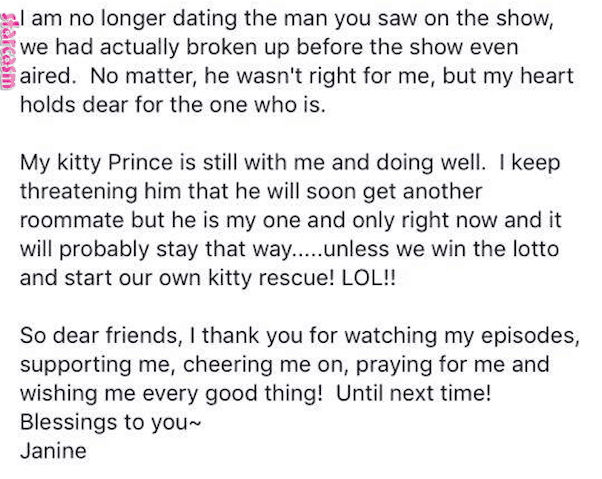 Happy Monday Everyone!
I will soon be changing the format of this page since I am no longer on the TV show My 600 Pound Life I am now an alumni 🙂
I still have a ways to go to complete my journey and I want you to know what I am doing and how I am getting along. I will be free to post photos at will, update you on my progress, my projects and offer you support if you are on a journey to a better life — whatever that means for you.

I have a couple other things in the works and will share those as soon as they are ready to go.

I am excited about how my life is improving and changing for the better. I recently went on vacation and will share some photos with you soon.
I also want to openly proclaim to all of you that I love and serve Jesus Christ as my personal savior and will honor him with the truth of ALL he has done for me in this process. The TV show may have edited out everything I ever said about God but I am here to tell you I would have never gotten half this far had He not carried me through this difficult time.

I am looking into new ventures, work and business opportunities, public speaking and ministry engagements. I still volunteer with the cat rescue, and am looking to connect with more ways to serve others in the Houston area.

I am no longer dating the man you saw on the show, we had actually broken up before the show even aired. No matter, he wasn’t right for me, but my heart holds dear for the one who is.

My kitty Prince is still with me and doing well. I keep threatening him that he will soon get another roommate but he is my one and only right now and it will probably stay that way……unless we win the lotto and start our own kitty rescue! LOL!!

So dear friends, I thank you for watching my episodes, supporting me, cheering me on, praying for me and wishing me every good thing! Until next time!
Blessings to you~
Janine

You can wish Janine a happy pseudo-retirement and further weight loss success over on her official Facebook page. Her 2018 My 600 Lb Life debut and 2019 Where Are They Now? follow-up are both available for streaming through TLC’s site.

(Photo credits: Where is Janine Mueller now via Facebook)

Rachel McAdams took marijuana to help her sleep, but ended up hallucinating