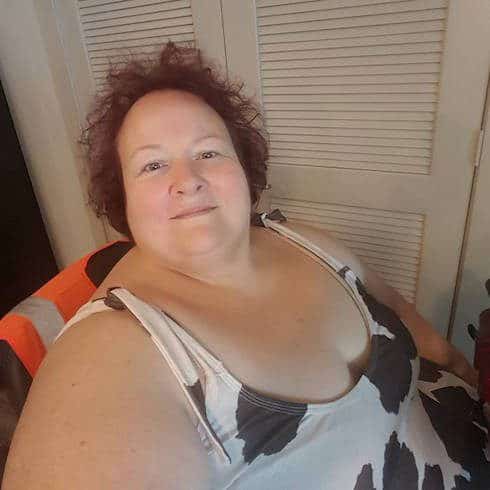 When we last heard from My 600 Lb Life‘s Janine Mueller, the Season 6 participant was on the up and up, still losing weight and keeping her goal of weight loss surgery in her sights. Now, thanks to the latest My 600 Lb Life Janine Mueller update, we can confirm that Janine has met her goal, and it sounds like she’s recovering nicely!

During her initial episode, Janine unfortunately didn’t meet the weight loss requirement for surgery. She was able to lose a laudable 112 total pounds, dropping from her peak weight of 678 pounds to 566 by the end of her year of filming.

But Janine also decided to make her move from her home state of Washington to Texas — and its close proximity to Dr. Nowzaradan’s office — a permanent one. So, while she earned a fair bit of ire from My 600 Lb Life viewers during her episode’s first run, it looks like her weight loss efforts have had a more positive reception since then.

And we’re happy to report that the latest news from Janine herself is even more positive. Just a few days ago, she offered a quick update on her Facebook page, the primary purpose of which was to link to a cancer research fundraiser for a friend of Janine’s. Nestled within that seemingly innocuous My 600 Lb Life Janine Mueller update was the news that Janine is unable to walk in the fundraiser — because she’s recovering from recent weight loss surgery!

Here’s a screengrab of the update from Janine’s page, followed by the update itself: 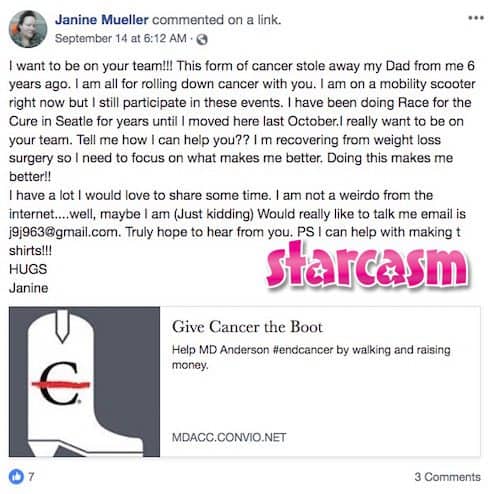 I want to be on your team!!! This form of cancer stole away my Dad from me 6 years ago. I am all for rolling down cancer with you. I am on a mobility scooter right now but I still participate in these events. I have been doing Race for the Cure in Seatle for years until I moved here last October.I really want to be on your team. Tell me how I can help you?? I m recovering from weight loss surgery so I need to focus on what makes me better. Doing this makes me better!!
I have a lot I would love to share some time. I am not a weirdo from the internet….well, maybe I am (Just kidding) Would really like to talk me email is j9j963@gmail.com. Truly hope to hear from you. PS I can help with making t shirts!!!
HUGS
Janine

During her last update this past March, Janine did reveal that she was moving toward surgery, but didn’t specifically mention weight loss. “I am still losing weight and pressing toward my surgery dates. I will get my lymphedema mass removed off my right thigh,” Janine said. It sounds like her weight loss journey has been even more successful in the year since Janine’s My 600 Lb Life episode aired than it was in year one!

And speaking of success and positivity, here’s the link to Janine’s friend’s cancer research fundraiser, which is already at 77% of its $10,000 goal.

Unfortunately, Janine hasn’t shared any new photos since March, as TLC and the My 600 Lb Life producers appear to have gotten much more strict about what the show’s cast can upload to social media. So here’s the most recent public photo of Janine, taken at a Susan B. Komen fundraiser this past spring: 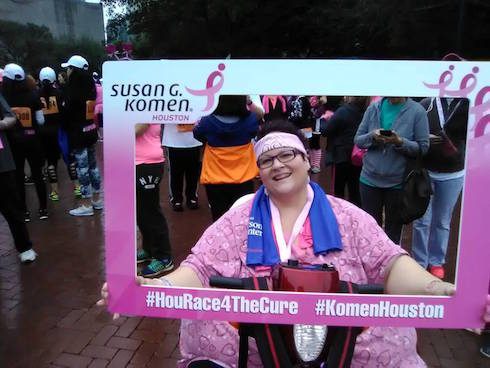 Filming for Janine’s Where Are They Now? episode began in early 2018; the episode is expected to air in the spring of 2019. Until then, you can keep up with Janine via her official Facebook page.