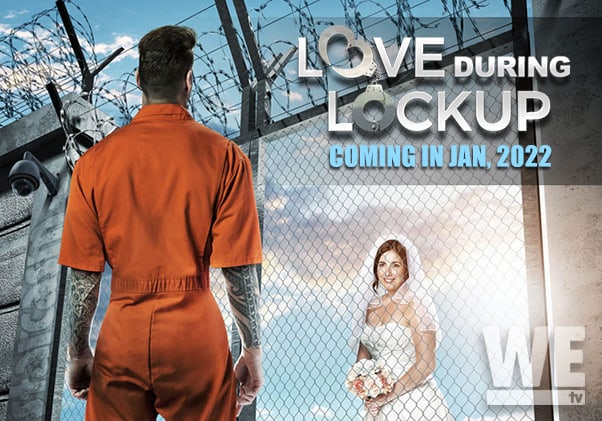 The Love After Lockupiverse is expanding! Sharp Entertainment is following the blueprint from their successful 90 Day Fiance franchise expansion and applying it to their prison romance series on WE tv.

Variety broke the news about the new spin-off in an article published earlier today. “Variety can exclusively reveal: Love During Lockup, which will show how these relationships start, is currently in production and will premiere on We in January.”

Here’s an excerpt from the article with a bit more about the new show from Sharp founder Matt Sharp:

Love During Lockup was an obvious extension of the brand, Sharp said. According to the producer behind roughly 50 zillion installments of 90 Day Fiancé for TLC, “From a creative standpoint, we’re always thinking about elements of a particular show that are kind of getting a short shrift.”

Yes, Love After Lockup would explain a couple’s origin story, but the full stories of how they’d met weren’t being told. “We always have talked a lot about the importance in an authentic series like this of capturing firsts,” Sharp said. “Not just talking about firsts, like, ‘We did this, we did that.’ But actually being there.”

By “backing up the timeline,” Sharp said, Love During Lockup will bear witness to those firsts. And, Gellert said, if the prisoner has a release date on the horizon, “You could ultimately end up seeing that Love During couple in Love After.”

I should also point out that there are numerous Love After Lockup cast members who are currently back behind bars, and one who never got out at all. So, it is very possible that we will see a familiar face(s) during the premiere season of Love During Lockup.

I cringe at the thought of WE tv bringing back the rather unbelievable Andrea and Lamondre story line, but I admit I wouldn’t mind following up on the incarcerated wooing adventures of someone like Lindsey Downs. Heck, it might even be entertaining to watch Matt or Doug juggle multiple ladies, despite the fact that neither of them have much of a chance of getting out of prison any time soon.

The new spin-off is a brilliant concept that I’m sure was the result of casting efforts. Aside from the glaring Lamondre exception, and the unforeseen delayed releases of cast members like Lizzie Kommes, Love After Lockup only casts inmates that are getting out soon. However, their casting department must have heard from LOTS of potential inmates who were not getting out soon. My guess is that there were some of these couples that had AMAZING stories and Love During Lockup was the inevitable inspiration that would allow their stories to be told as part of the franchise.

I highly recommend you check out the Variety article. It covers A LOT about the Love After Lockup franchise in addition to the new spin-off. For example, it reveals that the success of Love After Lockup and Life After Lockup has been a huge financial boon for WE tv. It also confirms that Brittany and Marcelino Santiago are the favorite couple of Matt Sharp and Lauren Gellert, We tv’s executive vice president of development and original programming.

I will leave you with this excerpt, which is sure to stir up a bit of debate among Love After Lockup fans:

Whereas casting for dating shows, especially The Bachelor and The Bachelorette, has been flooded by clout chasers in search of careers as influencers, Sharp said there is no such nonsense in the Love/Life franchise.

“Certainly as shows get more are successful, of course you’re going to have people that are potentially wanting to be on a show because they want to raise their social media platform,” he said. “We are on high alert for anyone that feels that way.”

Curious which #LoveAfterLockup Season 3 cast members stayed out of prison and which ones didn't? How about which non-ex-con cast member was arrested 3 times for domestic battery? We've got the answers! #LifeAfterLockup (NOTE: Our "Season 3" not WE tv's) https://t.co/Owqky3vHpK