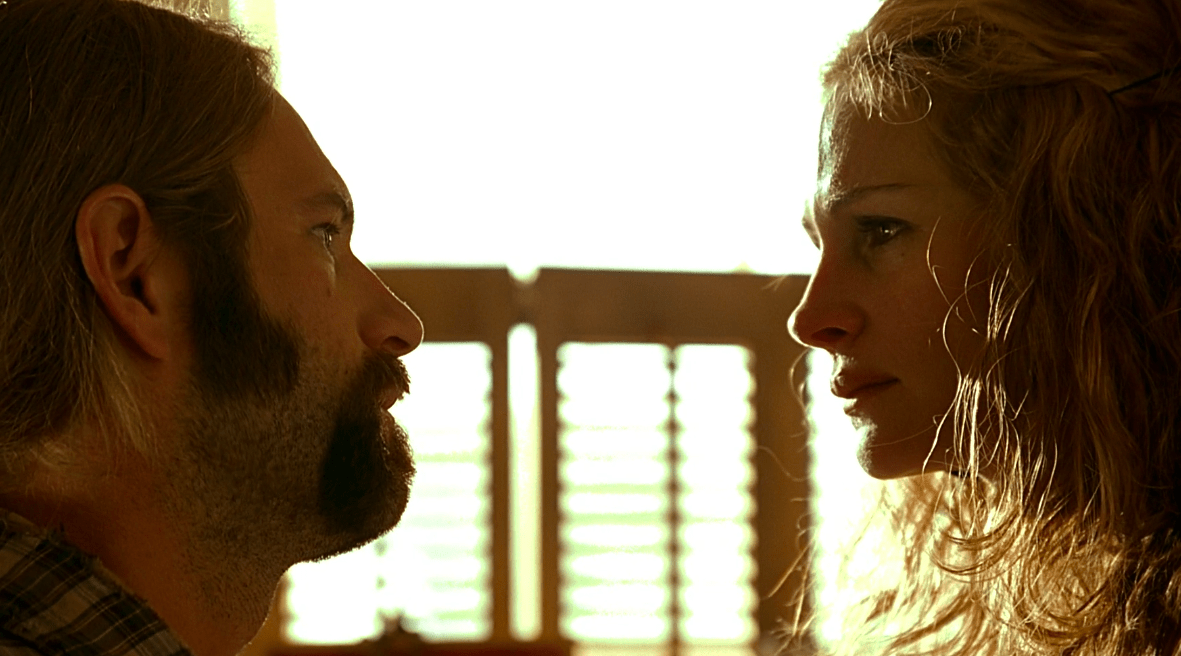 In the 2000 movie Erin Brockovich, the main character finds love with a biker neighbor named George (Aaron Eckhart) who, honestly, had a number of red flags (like his eagerness to take care of her young kids as a stranger.) In real life, their love didn’t have a happy ending. The man who the movie love interest was based on, Jorg Halaby, joined forces with her ex-husband Shawn Brown to try to extort money from her boss at the time: lawyer Ed Masry.

Why did Erin Brockovich’s exes try to extort her and the law firm she worked for?

Jorg Halaby, Shawn Brown, and their lawyer were arrested in April 2000 during a sting operation. At the time, the film based on Erin and her work with Ed Masry was blowing up the box office. They were asking for over $300,000 in exchange for not speaking ill of Ed Masry and Erin Brockovich in the media.

At the time, Ed Masry spoke to the L.A. Times to confirm the extortion attempt. He said Erin’s exes had threatened to tell the media that Erin and Ed had a sexual relationship and that Erin was a bad mom.

“They’re bitter, but that doesn’t mean they’re right coming to me and demanding money,” Erin Brockovich said at the time. “I’ve been trying to do the right thing, and it kind of came back and bit me in the butt.” She said Jorge was upset about how their relationship ended, and Shawn was upset that he didn’t get a part of the Universal movie deal. While Jorge was offered compensation and was portrayed in a flattering way, while the ex-husband Shawn was not a part of the movie at all.

Shawn and Jorge’s lawyer John Jeffrey Reiner had started the threats in April, 2000. He said that Shawn Brown was going to give interviews that would make both Erin Brockovich and Ed Masry look bad, but that he wouldn’t if he was given a sum of $200,000. In later conversations, that offer escalated to $280,000 because he was asking for money for Jorge Halaby as well.

A sting operation was set up where Shawn, Jorge, and attorney John Reiner showed up at Ed Masry’s law office to receive checks of $30,000 for Jorge Halaby and $280,000 for Shawn Brown. After the checks were handed over, Erin and Ed left the room, and investigators entered to arrest all three of the conspirators.

“I was on the verge of crying,” Erin Brockovich said about the sting. “I felt like I was going to throw up. The whole thing made me sick.”

“I felt tremendously sad,” Ed Masry said. “Families are going to be impacted by this. My wife is sick from this. Erin’s husband is sick over it. It’s not like we won anything. Everybody in this is a loser.”

The class-action lawsuit against Pacific Gas and Electric Company (PG&E) settled in 1996 for $333 million, which was a record-breaking out of court settlement at the time. The company had dumped 370 million gallons of wastewater contaminated with hexavalent chromium into unlined ponds around the town of Hinkley, California. The ponds were then covered up, but the contaminated water seeped into the groundwater supply. Many people in the Hinkley, California area suffered from cancer, bone problems, and other health issues that may have been caused or worsened by the water contamination.

Tom Girardi, who was turned into a character named Kurt Potter in the film, was also a part of this history-making settlement in “toxic tort” law. In January 2021, Ed Masry’s estate claimed that Tom Girardi still owes them money.

In the film, Erin meets George because he’s revving his motorcycle engine outside of her house in California. She’s angry and informs him that she’s a broke single mom who’s been married twice when he tries to flirt with her. The next time she sees him in the film he’s taking care of her kids because her babysitter dropped them off early while Erin was at work. George has already cooked for the kids and is eager to offer to babysit them.

He tells Erin he has a lot of time off because he works part of the year doing construction, and “lives cheap” the rest of the year. “I hope that’s not supposed to impress me,” Erin says, but she agrees to this arrangement and starts dating him.

In real life, he was actually neighbors with her ex-husband Shawn Brown in Reno, Nevada. She met Jorg in a bar, where he saved her from a drugged drink. Jorg helped Erin move to Los Angeles, and connected her with Ed Masry and his law partner Jim Vititoe to help her file a lawsuit over a care accident. Just like in the film, she did not win the case but did get a job working at the law firm.

Erin and Jorg were in a romantic relationship for a while, but when they split up he continued to give her child care, which was compensated for by the firm. Jorg also was paid a sum of money by Universal for using the character “George” in the film.

Two years after the movie’s success and the extortion plot, Ed Masry was brought to court over sexual harassment allegations brought by Kissandra Cohen.

Erin Brokovich testified in court that Ed Masry had “been nothing but a perfect gentleman to others.”

Kissandra Cohen’s lawyer argued that Erin was trying to protect the man who helped her gain fame and have a movie deal. At the time Erin was still working for Masry as his research director.

Kissandra said that she had been sexually harassed by lawyer James Brown when he wrote “Cool and kosher!! No pork on these gams!!” and “She looks real good in a skirt” on her cover photo of the Jewish Journal.

She also said she was left a lollipop in the shape of male genitalia from an unknown person with a note that read: “Suck on this.”

“I haven’t seen this kind of stuff in our law firm,” Erin Brockovich claimed in court. “If it was between friends, it could have been construed as a joke.”

Kissandra claimed that Ed Masry fired her in December 1999 because she refused his sexual advances. Ed Masry testified that he had fired her because she had lied about her credentials. She claimed she was about to graduate from Loyola University at the top of her class, when she had already graduated last in her class.

Ed Masry was cleared of sexual harassment charges, which she was seeking $6million for. They did find Ed guilty of slandering Kissandra, and awarded her $120,000 for this offense.

Ed Masry died in 2005 and his law firm filed for bankruptcy.

How real is Amish Mafia?