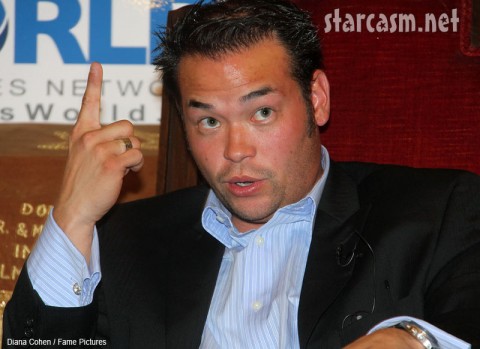 Whether or not Jon Gosselin is gettin’ drunk, gettin’ laid, or gettin’ spiritual, he wants to do it in the public eye, and I would be very surprised if he didn’t drop a book on us in the next few months about his “spiritual journey.” All he needs is a ghostwriter, and an Oprah interview

Last night Jon Gosselin held a special press conference with Rabbi Shmuley Boteach, where he claimed he’s not “a fame seeker.”  Of course, the natural thing to do when you want to avoid the spotlight is call a press conference in a synagogue with Michael Jackson’s former spiritual adviser by your side. I think that’s in the rule book for keeping this “low key.”

This is along the lines of Hailey Glassman going on the Insider to tell us to forget her name. The world of spin is dizzy.

We’ve seen Jon Gosselin talk a lot these last few months in between benders (maybe during, we don’t know). He’s talked to GMA, almost every tabloid and news magazine that would listen, Larry King, and the paparazzi to name a few. Most of what has come out of his mouth included the words “Kate abused me.”

Although Jon claims that he did not seek fame, he admits that he didn’t exactly turn it away when it came knockin.’ In fact, he says that he traded his morality for the sweet seduction of the camera.

Here’s what he said:

“Half the stuff I’ve done, if I look at my moral compass, I shouldn’t have done,” he said. “I know that but I did it anyway. It’s like fame canceled out conviction.”

He also apologized publicy to Kate (again), but still hasn’t reached out to her privately.

“I want to apologize to Kate in private. I’ll apologize to her for openly having relationships in the public eye. That was a huge mistake, because if she would’ve done that to me, I would have been extremely pissed off. Not because our relationship is over, it’s almost like a stab in the back. And now that I think about it, it was a very wrong thing to do. I definitely regret it.”

Jon also says he was present during Hailey’s emotional public laceration of him last week, and he thought “good for her, she got things out.” As for a break with Hailey, Jon said that they were just kind of “on hold.” I’m not sure what that means, seeing that he was fully dating Hailey while he was still married to Kate, and was having sex with other women while he was fully dating Hailey. Maybe Jon’s going to take this time to reset his “moral compass” and not have sex with anyone?

This ride with Jon Gosselin probably isn’t going to end anytime soon, even though Jon is no longer in talks about an Octomom TV show, or Michael Lohan about a Divorced Dads’ Club, Jon has made it clear that he wants a television career. That’s one thing he has in common with Kate.