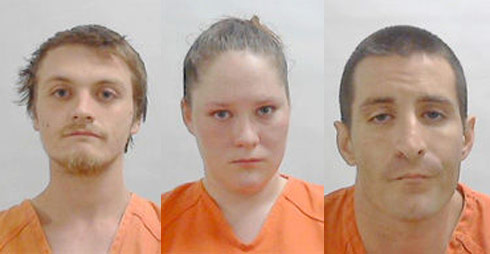 When a newspaper delivery person heard screams coming from a home in Jackson County, Florida she dialed 911. When the police arrived what they discovered was a situation that had been breaking bad for hours.

Jennie Stricker was delivering papers to the home just north of the town of Sneads when she heard cries for help and banging of wood coming from an upper story window. The people inside told her they had been held hostage for hours and been shot at.

When law enforcement arrived the people inside at first refused to come out, claiming that they feared for their safety because they believed these attackers might still be holed up in the bottom floor. Eventually the police were able to convince the folks inside that they were the good guys and they let the investigators in.

An inspection of the residence turned up a meth lab, some finished meth, and several spent rounds of ammunition inside the home.

The authorities reported via The Dothan Eagle:

“It appears that in their altered mental state, the subjects were hallucinating and believed that they were being attacked. The three armed themselves with a 12-guage shotgun and a .22 rifle. Approximately 40 rounds of 12-guage and an unknown number of .22 rounds were fired from inside the residence. Numerous windows were shot out and holes were shot in the walls. They completely removed a large rear window from the house on the second floor and threw the bathroom sink at the imaginary attackers. Chunks of sheetrock, wood, firearm parts and anything they could tear out of the residence was thrown outside, including the toilet, which was ripped from the floor. In total, more than $10,000 damage was done to the residence.”

The trio was arrested and booked on a number of assorted charges after they were medically cleared.