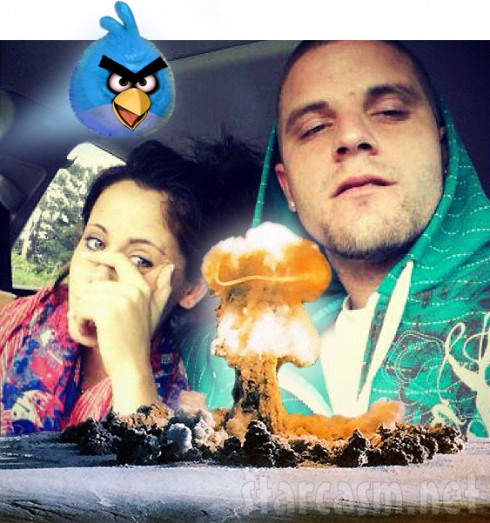 Things had seemingly been going very well for newlyweds Jenelle Evans and husband Courtland Rogers since it was revealed in Star magazine last week that Jenelle is seven weeks pregnant. But anyone who has followed Jenelle’s relationship history over the last few years knows that bliss is a tentative thing, and the all-too-familiar Twitter feud flames were lit late last night when Courtland apparently bugged out on his pregnant wife in the middle of the night to get lit himself at a party. Anger, profanity, and cheating allegations ensued…

The latest fiasco kicked off this morning at 1:36am when Jenelle posted a couple of mysterious tweets including, “ARE YOU F**KING KIDDING ME?!” and “@Courtyb11 Wow.” Then, at around 8:30 this morning, she tweeted, “Heartbroken in half completely.” followed by, “And just to think I fooled myself into thinking I was happy, happiness doesn’t exist it seems like. Just when I’m around my one and only.”

Prior to Jenelle’s heartbroken words, Courtland seemed to fess up to the bug out, but defended himself against claims he had cheated on Jenelle. “I went out last night and got wasted and came home at 3 am and I left my pregnant wife asleep by herself but I didn’t cheat!! I just left.” However, Jenelle wasn’t convinced and replied to the message saying, “@courtyb11 it was way worse then that.” 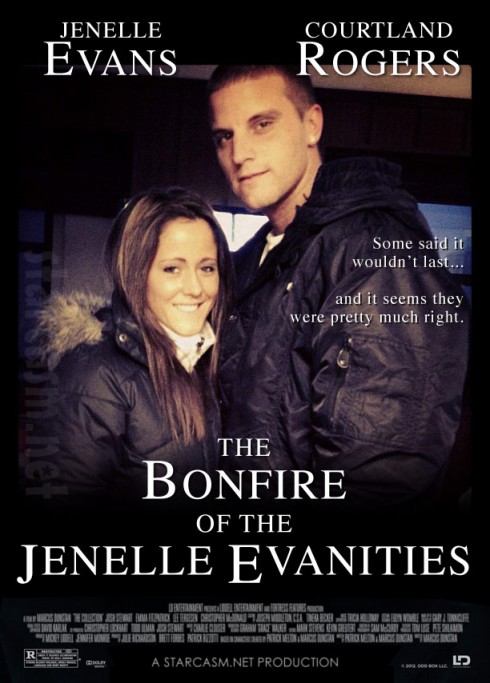 Here are all the Jenelle and Courtland tweets from the last 14 hours having to do with the latest fall out:

Courtland [C]: I think I just lost it all!!!!! I swear to god I am depressed as f**k I need my wife in my arms telling me everything is gonna b okay 🙁

J: Heartbroken in half completely.

C: She deserves somebody better!! A guy with a job a house and the perseverance to b anything they wanna be I’m a piece of sh!t and I now know!

C: So now all I can do is pray for our little angel and pray for her as well @PBandJenelley_1 sometimes life gets tuff where do I go from here?

C: I miss her like a million times more than anything else in the world 🙁

J: And just to think I fooled myself into thinking I was happy, happiness doesn’t exist it seems like. Just when I’m around my one and only.

C: And I am glad to know hat somebody has just sent me. A screenshot of jenelle and gary [Jenelle’s ex Gary Head] talking today ! TODAY

J: @courtyb11 want me to blast what u did? Lmfao don’t think so

C: I went out last night and got wasted and came home at 3 am and I left my pregnant wife asleep by herself but I didn’t cheat!! I just left

J: @courtyb11 it was way worse then that

J: I have to figure this out.

UPDATE – Courtland has since spoken with his buddies at Radar Online/Star magazine and tells the site Jenelle is lowering the boom and the couple may be headed for divorce because of his drinking. “Jenelle said I need to straighten out and not drink and not go out and not do dumb stuff anymore,” Courtland says. “She said she doesn’t want to be with someone who is messing up all the time.”

“I’m not perfect and what Jenelle wants is for me to show her that I love her and improve myself, so I have to figure out how to do that,” he confesses. “I love her and I want her to work this out with me.

“I can’t wait to meet this baby and I want to be a great dad. I’ve learned how to be a dad from not being a dad to my other child all these past months and I want to show Jenelle and everyone else that I can be a good dad.”

In addition to his antics on Sunday night, it appears as though Courtland was also up to no good on Saturday night. According to Jenelle’s manager Leo Daniels, he “turned down a $5000 meet and greet” with a fan on Jenelle’s behalf without her even knowing about it. “Courtland was texting me as JENELLE Saturday,” Leo explained. “No telling how many messages she hasn’t got. This 1 cost her $5000!” Why would Courtland have kept the message from his wife? Doesn’t he want her to be able to seize every opportunity that comes her way? Something just doesn’t sound right here..

Jenelle and Courtland may seem to be on the verge of a split, but as you might recall, they’ve been here before and managed to get through things. Plus, this time around Jenelle has a child to think about!

What do you think? Could this be the end or will they work it out?