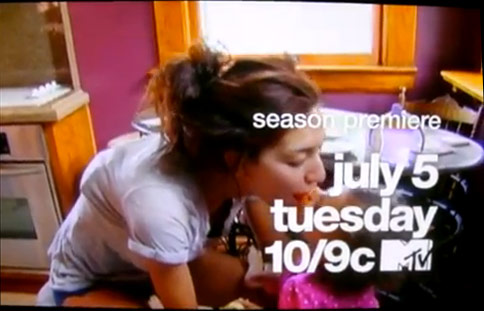 Who would have thought it would be this hard to track down commercials for an upcoming television show?!? MTV has released five new promotional spots for Teen Mom Season 3 (set to premiere July 5 at 9/8c) with four of them focusing on individuals and the fifth featuring all four girls. Yesterday we found a rough version of Amber’s commercial on Youtube and now we can add that “fifth” preview which has all four moms!

(My apologies – the quality is once again pretty lousy. It’s essentially someone just recording their DVRed television screen with a video camera, but this is what we have to resort to when MTV won’t post their own commercials online!)

Not quite as exciting as the individual ones – and I’m sure once we see them all this one will seem obsolete. That being said, how did it feel gettin ur original Teen Mom fix on y’all! There will be fireworks and celebrating on July 4th, and then more of the same the very next day! Woo hoo! (Did I mention I’m a big fan?)

UPDATE – We can now add Farrah Abraham’s commercial to the collection! CLICK HERE to watch it!