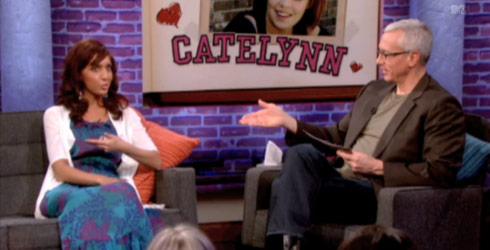 Everybody (including myself) has conjectured on if and for how long Farrah Abraham left her daughter Sophia with her mother during her move to the sunshine state. Well the brief teaser clip that MTV has provided for next week’s Teen Mom Reunion Special Part 1, set to air 10/9c on Tuesday, gives us a little more insight into that answer.

Here’s the brief clip that features Farrah talking about the big move with Dr. Drew:

Well I feel a little better now with the knowledge that Farrah’s own mom didn’t even know about the decision or for how long until the Reunion Show. Just in case you’re at a place where you can’t catch that brief clip she told Dr. Drew that she needed two weeks to set up shop in Florida. This jives with our source who stated exactly that.

Dr. Drew: Let’s talk about this. You’re going to leave Sophia with your mom and dad while you move to Florida to get your living environment situated and enroll in school?

Farrah: I’m taking a 2-month break before I start.

Dr. Drew: So how long do you figure you’re going to need away from Sophia to get set up in Florida?

Farrah: I planned it out, two weeks.

Dr. Drew: Two weeks. And your mom is aware of this?

Dr. Drew: (Somewhat shocked) Is she going to be surprised to hear that right here?

Farrah: I mean she knows now (pointing off camera), I’m sure she’s listening.

Dr. Drew: If she’s listening, she does know right now. Farrah’s mom Deborah is here so we’re going to bring her out, give her this news and we’re going to see what she really thinks about the move to Florida right after the break.

I don’t know which I enjoyed more, Farrah’s matter-of-factness or the big Catelynn Lowell billboard behind the two. It’s like a Teen Mom Hall of Fame set for these shows!