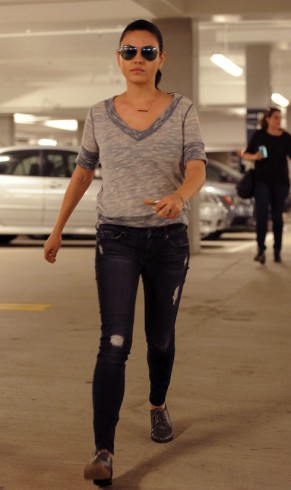 Mila Kunis is being accused of something very banal and highly unusual–stealing a chicken from a little girl when the two were growing up together in Ukraine.

Kristina Karo, a singer who claims to have grown up with Kunis before the two moved to the United States, says Kunis stole a live chicken that Karo kept as a pet.

Karo says she had named the chicken “Doggie.”

She is seeking $5,000 to cover the therapy sessions she needs to get over the trauma of this loss. Which trauma was exacerbated when, according to Karo, she “arriv[ed] in the US and [saw Kunis] in person,” and now needs therapy to combat emotional abuse, as well.

It should be noted that Karo has a music video coming out soon. The timing of her video’s release and the lawsuit was not lost on either Kunis or husband Ashton Kutcher, who shared a video of their incredulity shortly after finding out about the lawsuit:

Neither Karo nor her attorneys have offered comment on the video.