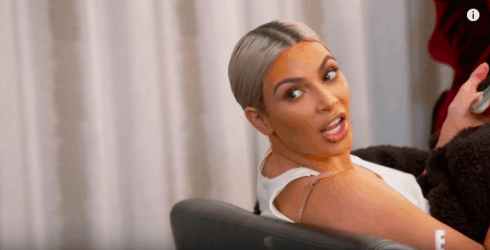 In a preview clip of the latest episode of KUWTK, Kim Kardashian snaps at her older sister Kourtney over a scheduling conflict with the family Christmas photo. Things get rough and Kim digs deep – attacking Kourtney’s appearance not being “least interesting to look at” of the celebrity family.

Kim not only attacks Kourtney’s looks and tells her she’s not wanted, she also tells Kourtney she has no idea what it’s like to run a business. Khloe walks in as the yelling escalates and mom Kris tries to get her 30-something-year old children to stop bickering.

The main issue steams from the fact that Kourtney put her foot down about leaving the photoshoot at 4 p.m. no matter what, but that demand conflicts with Kim’s business meeting. Kourtney holds firm, so Kim erupts – telling her she doesn’t know anything about running a business because she hasn’t found one that she’s passionate about.

Kourtney leaves the room after that, but Kim’s not done dragging her sister. “I need Kourtney to not be so f**king annoying with a stick up her a**, like she runs this s**t because she doesn’t,” Kim goes on. “She is the least exciting to look at.”