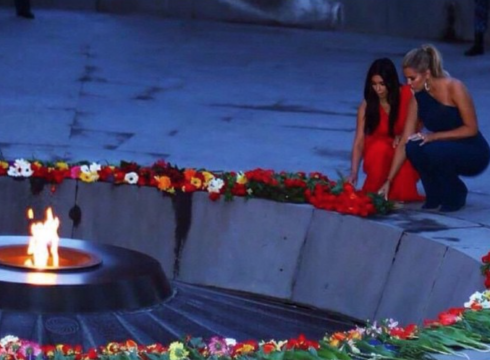 Tonight, on the season premiere of Keeping Up With the Kardashians, Kim and Khloe take a trip to Armenia for the 100th anniversary of the Armenian genocide, and they’re treated like royalty. Their visit raised awareness for the 1915 slaughter of 1.5 million people, a shockingly sad event that’s rarely talked about.

Kim, Kourtney, Khloe, and Rob Kardashian’s late father, Robert Kardashian, are of Armenian descent, and it would have meant a lot of him to know his children visited their homeland. According to an essay Kim penned for TIME during her visit this April, if her great-great grandparents had not fled from Armenia to L.A. in 1914, the family probably would have not survived.

“I am saddened that still 100 years later not everyone has recognized that 1.5 million people were murdered,” Kim wrote. “But proud of the fact that I see change and am happy many people have started to recognize this genocide! We won’t give up, we will be recognized by all soon!”

“My great-great-grandparents came from Armenia to Los Angeles in 1914, right before the genocide happened,” she wrote. “We have no existing family left in Armenia. Had they not escaped, we wouldn’t be here.”

“I am proud to now say I have been to Armenia,” she said on Instagram. “I have seen the memorials and the people who survived and I am so proud of how strong the Armenian people are!”

The genocide, which is also known in Armenia as Medz Yeghern (the Great Crime), started April 24, 1915, when the Ottoman government rounded up minority Armenians, starting with intellectuals and community leaders.

The word “genocide” was inspired by this Armenian tragedy. Raphael Lemkin, a Polish and Jewish lawyer, coined the word in 1943 to define the legal systematic killing of a large population of a ethnic, racial, religious, cultural, or national group. He recognized the similarity of what was happening with the Nazis and what had occurred several decades before in Armenia, and then in Assyria.

PHOTOS Khloe Kardashian gets close with The Game at the club