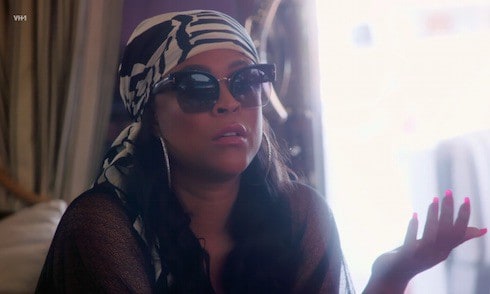 It’s been an especially rough few months for Jackie Christie’s relationship with estranged daughter Takari Lee, and the enmity between the two of them has begun spilling over into Jackie’s relationship with the rest of the cast. But, while we already know that Takari’s memoir is about to keep both Evelyn Lozada and Jennifer Williams turned against her, there’s still a major unanswered question about Jackie and Shaunie from last week’s episode.

The Basketball Wives star got into a huge argument with co-star and show creator Shaunie O’Neal a week ago, over some allegedly nasty comments Shaunie made in a recent interview. Things got so heated that Jackie broke down in tears before leaving the party boat entirely:

The scene is certainly tense, but it’s short on specifics. What did Shaunie O’Neal say about Jackie and Takari? Fortunately, the good people at VH1 tracked down the interview in question–and, while Shaunie does indeed address Jackie and Takari’s deteriorating relationship, it also seems like Jackie’s reaction might have been a little overblown (to say the least).

We’ve reprinted the relevant portion below; you can read the entire interview here. (And, in case you missed them, here’s our article on the sections of Takari’s memoir that Takari has offered up as sneak peeks.)

Before we get to that, though, it’s worth repeating that it really doesn’t look like Shaunie talks trash–or anything like it–about Jackie; on the contrary, it seems like Shaunie goes out of her way to speak only as a colleague of Jackie’s, and to keep her personal opinions to herself. At several points she straight-up says “I don’t know” and reiterates that she wants to stay out of the mess. So, if you’re on #TeamJackie and you feel like *any* public mention of the fact that Jackie and Takari are beefing is a violation of Jackie’s privacy, there’s plenty to attack here. If not, you might struggle to find something.

From The Hip Hop Socialite:

ON JACKIE CHRISTIE’S SITUATION WITH HER ESTRANGED DAUGHTER:

You know, I feel the same way you do about Jackie – she’s a sweetheart, she’s never done anything to me, and I’ve never had a reason to have any problems with Jackie, ever. To this day, I don’t personally have an issue with Jackie Christie, but I said this earlier to someone that I just don’t understand what is going on with that entire situation. And I’ve sat down with Jackie because I didn’t know Jackie even had grandkids until this incident happened. Never heard any mention of grandkids, which is odd to me – I don’t have grandkids, but I would imagine if I did, the world would know because I just would be a proud grandmother. And knock on wood because I don’t want no grandkids no time soon, but I’m saying that to say that it was shocking that she even had grandkids. And then when find out that she has them this way was like, oh my God! What the heck is going on? And then I’ve got all these questions like everybody else like why did she have to start of GoFund [GoFundMe]. I’m sure Jackie would have helped her – this just doesn’t make sense. So, I asked her, and I don’t’ want to put her business out there because I don’t know if she wants the world to know that or not, but it was a lot of reasons why Jackie gave as far as her relationship with her daughter. To me, as a mother, and I just don’t want to throw shade on anybody because I feel like whatever her truth is, is her truth, and whatever she did or doesn’t do is her. But me as a mom, I don’t really care what my relationship is with my child at that point if there’s a grandchild involved that is hurt, that needs me; if it’s a grandchild involved, and it’s a birthday or birth, I’m going to be there, you know what I mean? You’ve damn near are going to have to move to another country and hide and I can’t find you for me to not be involved in some way, especially a tragedy, you know what I mean? I just would have jumped on a plane and been there, and I can’t fathom any reason why she wouldn’t. But she apparently has a reason why she wasn’t there that she stands by and she’s okay with, and if that’s the way she feels, who am I? That wouldn’t be me, but she stands by her decision, and it’s heartbreaking because every Monday, her daughter goes in on Twitter and any other social media that she can kind of defending…not really defending, but telling her truth. Like that’s not true, or this and that, and it’s like you keep finding out more and more, and you’re like, what the hell? I cannot wrap my head around how this is okay, at all.

I even told her to her face, so this will not be news, that I’m choosing to remove myself from any story line about it, any conversation about it because a – Jackie has always been so sweet and so nice and all those…she’s supportive, she’s all these wonderful things, and she’s always been that to me, but this situation, I’m so bothered by, that I’m torn too. Like I don’t…I believe it, but I don’t want to believe it – I don’t want to believe that that’s the Jackie Christie I know. And what reasons she gave me, to me aren’t…they just still don’t match, you know what I mean? But I don’t…like I said, I still go give Jackie a hug, and I still like her, but this right here, I don’t even know. I just have chosen to not have an opinion, not say anything because she’s very sensitive about it, and it’s caused a lot of tears and a lot of conversations this season, you’ll see. It gets really real, and actually, it still is very, very real right now because we’re still filming. So it’s a very sensitive subject, and there’s a lot of opinions, but there are some that are riding and dying with Jackie and the whole thing, so I don’t know. Girl, I just try to stay out of it.

(Photo credits: What did Shaunie O’Neal say via VH1)

Did Jackie Christie quit Basketball Wives after a cast member beat her up during filming?