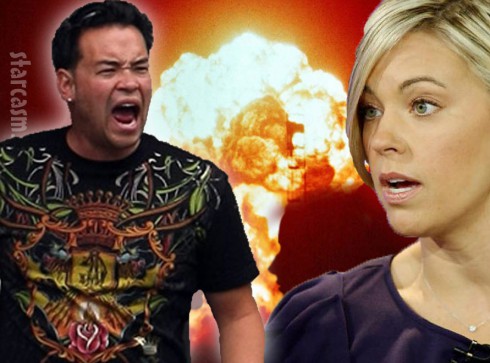 Apparently forgetting about their kids that made them famous, one of the embittered Gosselins has bashed the other in a public forum – again.

This time around on Jon and Kate Plus Hate it’s Jon dropping an f-bomb tirade about Kate courtesy of a preview clip for tonight’s episode of Couples Train Wreck-Therapy.

The clip features a cool-shades sporting Jon boy talking about his legal issues with Kate in relation to trying to get a book published telling his side of the story. After getting a phone call from Kate, Jon goes off in what’s probably the worst things said by one about the other in front of cameras (sigh).

(Lemme get my asterisk button finger warmed up) And here’s what Jon (bleeping) said:

Great f**king life. You don’t value me as a human or a man. Why do I f**king try? It’s narcissistic f**king behavior. She can go out and talk about the kids any time she wants. She can tweet, and have a f**king website dedicated to them – every motherf**king book she’s put out… Because she wants to keep on being on television which is never going to f**king happen because she can go and f**king die. There’s your honest depiction of Kate Gosselin. Piece of f**king sh*t. What a sh**ty human being. I need a f**king punching bag.”

Former Real Housewife Taylor Armstrong provides some pretty accurate commentary when she says, “Jon and Kate need to focus on 8. Wasn’t that the point of this whole thing with them? It’s just a waste of everyone’s time and 8 little people get stuck in the middle.”