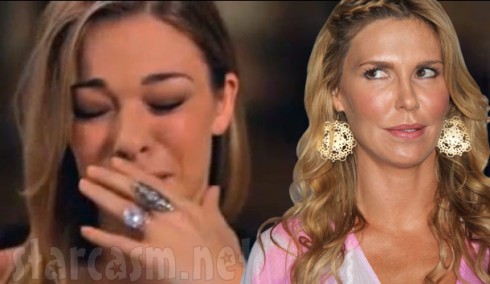 The much-publicized LeAnn Rimes and Brandi Glanville feud reignited last week after a seemingly innocent comment by LeAnn referring to Brandi and Eddie Cibrian’s children as “her boys.” Since then things have exploded with Eddie Cibrian also getting in on the mudslinging by sharing a frustrated email exchange with ex-wife Brandi with Radar Online. That was followed by an even more frustrated profanity-laden email from Brandi Glanville in which she calls LeAnn Rimes a “country c***” among many other things.

With their aggression seemingly played out, Brandi and LeAnn have now seemingly shifted gears into sympathy mode, first with Brandi Glanville telling In Touch that she will be having surgery this week to remove a tumor from her breast. “I am having surgery this week and am relieved it’s going to be over with,” Brandi tells the magazine. “It’s a blessing the tumor is non-cancerous.”

LeAnn is countering with tonight’s E! Special: LeAnn Rimes in which the singer sits down with Giuliana Rancic in an emotional interview in which she reflects on her affair with Eddie Cibrian and all the pain and suffering it has caused.

Rancic asks Rimes if she has any regrets. “I don’t like the word regret,” LeAnn says. “I wish I handled it differently because I wish I could have been better for me, for Brandi [Glanville, Cibrian’s ex-wife], for Dean [Sheremet, her ex-husband], for Eddie, and for everyone else. I know, in this situation, it’s going to take some time. All I wish is that everyone that was hurt, that we hurt, that I hurt, can be happy.”

In this clip LeAnn begins to lose it as she explains, “No one will ever understand how much thought and hurt were put into our decision” to end their respective marriages.

“I don’t think anything can separate anything that’s super-connected,” Rimes continues. “You might have had so many wonderful things with each other’s spouses in your relationship, but something along the way broke that. You can’t break what’s broken already.”

LeAnn’s husband (and Brandi Glanville’s former husband) Eddie Cibrian offers up sympathy for his current wife. “My heart goes out to her every single time she’s getting bashed for something,” Cibrian tells E!. “It’s unfair for her and it’s unfair for us. [The affair] wasn’t frivolous, you know.”

Though I never thought I would ever post this song in a post performed by anyone other than the late, great Buck Owens, here’s LeAnn Rimes with her rendition of the seemingly appropriate country classic, “Crying Time:”