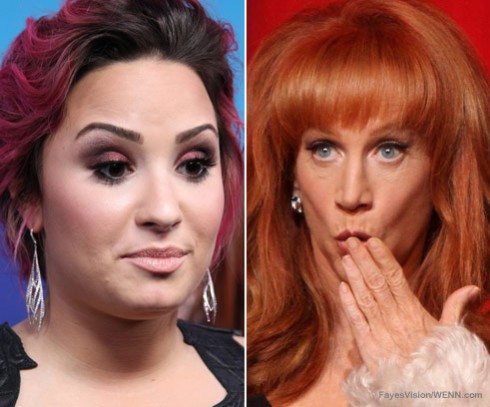 In today’s “random celebrities going after each other via social media circus” we have comedian Kathy Griffin vs. singer/actress Demi Lovato and her army of overzealous fans.

During an ask me anything type of deal earlier this week on Twitter, Griffin was quizzed on who she thought the “biggest douche celebrity” she’s ever met was and she answered, “Probably Demi Lovato.” Then Kathy added, “Plus she should calm the f down bout Lady Gaga getting barfed on.” The latter comment was in reference to Lovato, who has battled eating disorders,  tweeting previously about how she felt Gaga’s choice to have her self vomited on live at SXSW was in poor taste.

Lovato caught wind of the comment and replied in kind by posting the following photo of herself making stink face while Griffin looms in the background. She captioned the pic, “Only a ‘douche’ to people I can’t stand.” 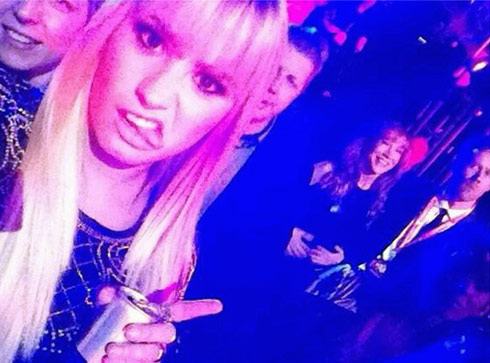 It didn’t end there as Demi’s devoted followers started peppering Griffin with demonstrative tweets – and the witty red head decided she’d just share some of them unfiltered to show everyone just how insane some of the reactions were.

Examples of the vitriol:

“GET CANCER F**KING GINGER.” “slit your throat you ugly b*tch you deserve cancer i hope your whole familys burns to the ground.” “I really hope you commit sue of side tonight.” “you’re a f**king cracker nobody cares about your fa**ot a*s. stay in the B-List b*tch.”

Griffin did acknowledged that she didn’t believe these trolls represented the majority of Lovato’s fan base.

In response, Demi sent out a long tweet imploring people to stop the bullying:

I love you guys so much but y’all gotta chill with sending hate towards other people. Regardless of what they say or do.. The cruel things some of you are saying can really, REALLY hurt people. It’s called cyber-bullying and somethings should NEVER be wished upon EVER. No matter WHAT. It makes me so sad to see how mean people can really be after all I’ve spoken out about anti-bullying. Be an example for other haters. I know my #Lovatics are better than that. I really appreciate you guys always having my back but this is going way too far.

Well there you have it. At least so far…