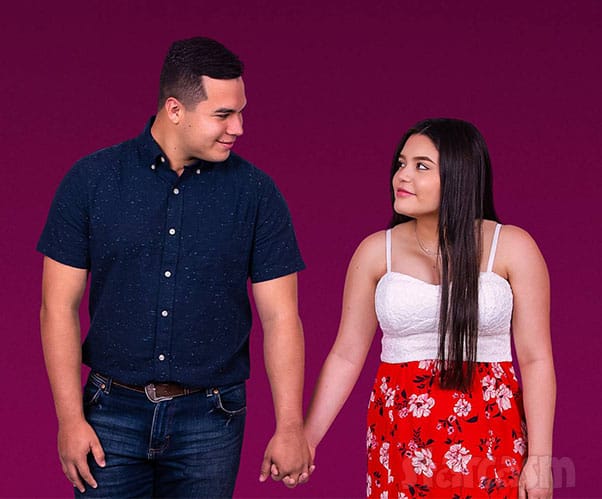 We have some bummer news to report as it appears than fan favorite Unexpected couple Myrka Cantu and Ethan Ybarra have split.

Rumors of the break up began to swirl online Friday because of the couple’s activity on social media. On Ethan’s side, he deleted all of his photos — including his profile photo — on Instagram. UPDATE – Scroll to the bottom of the post for the latest updates from Myrka and Ethan, including both of them confirming the break up.

Meanwhile, Myrka took things a lot further on TikTok. For starters, she changed her TikTok ID from @ethan_myrka25 to @cantumyrka134. In addition to deleting Ethan from her ID, she also looks to have deleted every video with him in it as well.

As further evidence of a split, Myrka shared a TikTok video mouthing the words to the Olivia Rodrigo song “Déjà Vu.” Here are the lyrics that Myrka sings in the clip:

Strawberry ice cream in Malibu
Don’t act like we didn’t do that sh*t, too

And the actual video:

##Inverted but like when it saw it tho. ##LoveMeMode ##tlcunexpected ##unexpected ##fypシ ##rgv956

Myrka’s choice of songs seems to suggest that Ethan is already seeing someone else. There are reports that Ethan shared a video talking with another girl about getting something to eat together, but I’ve been unable to confirm that.

Myrka replied to some of the numerous comments asking whether or not she and Ethan broke up. Although she didn’t confirm a split, she didn’t seem to leave any question about the couple having issues right now. Here are some of the interactions with Myrka in the comments for her TikTok post:

MYRKA: Something I need to throw away apparently lol.

COMMENT: I know [sometimes] people go their own ways and stuff happens. It’s none of my business of course! But I hope you guys are still together! 😭

MYRKA: Things work out for the best I always say.

I believe that the cactus featured in the video is a craft project that Myrka and Ethan made together, and they documented in a since-deleted post(s) on social media.

In addition to her TikTok clips, Myrka hopped over to Snapchat and shared a post in which she is making a strained face and she wrote: “I think this is the part in the break up where I’m supposed to glow up?”

UPDATE – An alleged text message exchange with Myrka surfaced online in which she says that Ethan tried to hit her. Both Myrka and Ethan responded to the image by asserting it was Photoshopped. Ethan’s response includes confirmation that he and Myrka have split.

Here are their responses to the fake text exchange:

MYRKA: This has been brought to my attention, and this is the only thing I will speak on at the moment. I never said this. This is Photoshopped. That never happened. And even if it did I would not put Ethan down like that. At the end of the day he is still the father of my daughter and I will respect him as such.

ETHAN: I’m going to clear everything up. Myrka and I are no longer together. We both agreed no one hit or cheated, it was just something that had to happen and I don’t regret anything. We are all doing good right now and so is the baby. This is the truth and 100% truth. We will no longer talk about it, so let this be the last post out of respect for us and our privacy. Please don’t contact us about information because we will not give anything. It is our [cut off].

UPDATE – Myrka did an Instagram Q&A with fans and responded to one of the many folks asking her if she and Ethan are still together. “EVERYONE is asking me this question,” Myrka began. “NO WE ARE NOT TOGETHER. I broke up with him. And that’s all I will say.”

The apparent break up between Myrka and Ethan caps off a VERY dramatic 12 months for the couple. After Myrka left her mother Liliana’s house due to issues over her pregnancy, she moved in with Ethan and his parents, Charlie and Michelle. This was all featured on the most recent season of Unexpected.

Ethan’s parents would eventually split up, and Ethan’s mom, Michelle, later kicked Myrka (and Ethan and their daughter Attalie as a result) out of her house after a heated dispute.

Myrka, Ethan and daughter Attalie moved in with Myrka’s dad, but he would eventually have to leave due to work. Myrka and Attalie then moved back in with her mom, Liliana, and Ethan moved back in with either his mom or dad. They stated at the time that they were waiting to move in with Ethan’s dad in a house he was having built.

That’s pretty much the last we heard before the apparent break up on Friday. It is possible that the couple broke up sooner than Friday, and they were merely keeping the split a secret until after the Unexpected Couples Tell All aired this week. However, that is purely speculation.

Viewers may eventually get the full story on the couple’s relationship issues on TLC as Myrka’s mom has revealed online that they signed up to do two seasons.

UPDATE – In response to a Facebook group post alleging that Myrka and Ethan might be faking the split to stir up drama and help insure they get invited back for another season, Ethan’s dad Charlie said that a return is not happening. “We were begged to come back,” he revealed. “As of now we have all declined.”

McKayla Adkins not filming for Unexpected Season 4, reminds us Tim is her step-grandpa