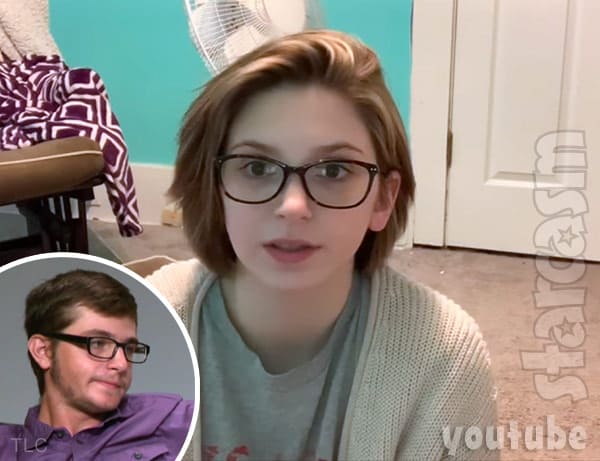 Unexpected mom McKayla Adkins, who is currently just over 37 weeks pregnant with her second child, recently shared a YouTube video in which she revealed that she has moved out of her and boyfriend Caelan’s house and back in with her grandparents, where she plans to stay indefinitely.

In the video, titled “Why I moved out.. we’re separated” (included below), McKayla reveals that she made the move about a month ago and that it was mostly because of how monay hours Caelan was working. His long work hours meant that she was spending a lot of time alone with her son Timmy.

“Me and Caelan made the decision together that it would be best for me to move in with my grandparents because I’m not having the help and emotional support and stuff that I need,” McKayla says. “It made me super depressed to be there by myself all day, because Caelan works all day — he’s not home until like eight o’clock or six o’clock. So he’s gone from before I wake up until about the time I go to bed. And we just weren’t having any social time and it was just really hard on me and I got depressed, and I just didn’t want to live there any more. I was tired of being alone.”

The 18-year-old reality star says that the initial plan was for her to remain at her grandparents’ house until roughly two weeks after giving birth, before returning to the house with Caelan. She recently decided to extend her post-birth stay from two weeks to indefinite, and she’s planning on moving their son Timmy’s stuff there soon. Thankfully, most all of the items she has gotten for her soon-to-be-born daughter are already at her grandparents’ house.

In addition, her and Caelan’s landlord at their rental house is drawing up a new lease removing her name and leaving only Caelan’s. She adds that the dogs the couple recently acquired will remain at the rental house with Caelan.

Surprisingly, McKayla insists that not living with Caelan does not mean they are no longer together. “We didn’t break up or anything, it’s just he wants to stay there and I want to be here,” McKayla says.

UPDATE – McKayla was apparently not telling the truth about her and Caelan as they have since started attacking each other on social media with McKayla confirming that they have indeed broken up.

In case you missed it, McKayla first revealed that she was pregnant again back in September, apparently against the wishes of TLC and show producers as they wanted her to wait until the announcement was made on the show.

Once the cat was officially out of the bag, McKayla began making regular posts updating fans on her pregnancy and her baby bump. Then, at the end of October, she and son Timmy worked on a gender reveal craft project together with pumpkins, revealing that Timmy is going to have a little sister.

It is believed that McKayla will be back for Unexpected Season 3, unlike her co-stars Emily Noack and Laura Barron.

UPDATE – After posting her video, McKayla responded to some negative comments by admitting that she didn’t reveal everything in the video: “The funny thing is, everyone is judging my newest video and me as a parent but no one knows what happens other than what we choose to post.,” she tweeted. “I don’t have to disclose everything. If you have something shitty to say you’re getting blocked ??”

She did reveal a little more info, however, when someone asked who would be watching the dogs. “Someone else is living there,” she replied. “It’s really no ones business.”