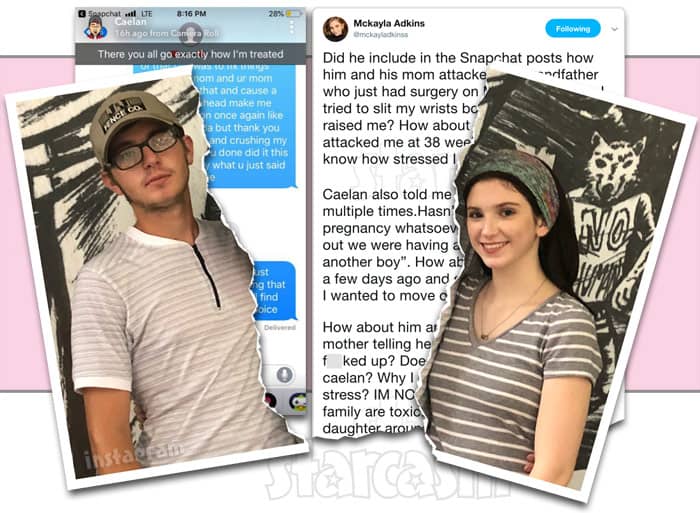 Earlier this week, we shared the news that pregnant Unexpected mom McKayla Adkins has moved out of her shared home with boyfriend Caelan Morrison and back in with her grandparents, where she plans to stay indefinitely with her son Timothy and soon-to-be-born daughter after she arrives. McKayla insisted that it was a mutual decision due mostly to how much time she had to spend alone while Caelan worked long hours. “We didn’t break up or anything,” she said, “it’s just he wants to stay there and I want to be here.”

It appears that the relationship between McKayla and Caelan isn’t as peaceful as she let on, however, as he took to Snapchat to express his frustration over how he says McKayla treats him. McKayla later responded on Twitter by BLOWING UP!

Caealan’s Snapchat posts included a couple of alleged text message conversations between him and McKayla. “Go ahead make me the bad person once again like always McKayla,” Caelan wrote in one text exchange. “But thank you for hurting me and crushing my heart because u done did it this time especially what u just said to me! Goodbye.”

“It is what it is. Bye,” was the text response from McKayla. That was followed by: “I wish this baby wasn’t yours. But sadly I can’t change that.”

Caelan described the messages to his Snapchat followers by adding: “There you all go exactly how I’m treated.”

On another text exchange, Caelan added the caption: “The truth has come out for this woman tired of being treated like sh*t when I’ve done everything right.”

In that series of text messages, McKayla allegedly wrote to Caelan:

You will not be in the room when the baby is born. You have not been around this whole pregnancy so you don’t need to be there when she’s born. You also won’t have a say in her name or anything.

Caelan circled that entry in red and wrote over top: “Lie.”

On two additional photos, one of which was a selfie, Caelan revealed his reluctance to say anything, and then seemed to temper his fury a bit as he asked that folks not respond by attacking McKayla.

Someone mentioned Caelan’s snaps to McKayla on Twitter, and she responded at length in a series of tweets:

McKayla’s outburst left some of her followers with questions, and McKayla responded to quite a few of them in hopes of clarifying things:

In addition to her Twitter responses, McKayla also posted a brand new YouTube video (below) confirming that she and Caelan “are done” with more details about what led to the split.

“We broke up. we did it a few days ago,” McKayla says flatly, adding that she did not want to do a video about the breakup for a few months, but it seems Caelan’s Snapchat posts and people’s reactions to her video about her moving out forced her hand. “Our relationship is completely broken,” she says. “We will not be getting back together. So, we are done.”

As far as what Cealan’s relationship will be with the children, McKayla says: “I’m leaving that up to him. I’m not going to force him to be in Timothy’s life. If he wants to see him he can.”

“We have been having problems since we moved into the house from the apartment,” McKayla continues. She says that Caelan had a friend who would frequently stay the night and that Caelan “never spent time with me. It was like me and Timothy were second priority.”

McKayla also says that their first dog Domino was requiring a lot of money to take care of, and she says that Caelan was not paying half of the expenses like he had said that he would. In addition, the dog began destroying things like the couch, the carpet, and an ottoman.

In addition to what she says in the video, McKayla also added some text on the bottom to cover something she apparently forgot to say: “He also constantly took off work for no reason, and still didn’t spend the day with me or Timothy, or go to any doctor’s appointments, but maybe two. Even if he promised he’d be there. When he took off work he was also hanging with his friends or riding his pit bike and doing whatever he wanted.”

Here is the full YouTube video with McKayla’s latest update:

The timing for the split couldn’t be worse for the young couple, who have a rather lengthy history of breakups and reconciliations. McKayla is almost 38 weeks pregnant and should be giving birth any day now. It’s certainly a very unfortunate situation for everyone involved at a time that should be joyful.

McKayla mentions filming, so that seems to confirm what we already thought in that she will be returning for Unexpected Season 3. I assume we will be seeing a lot of what led to the break up on screen next season.