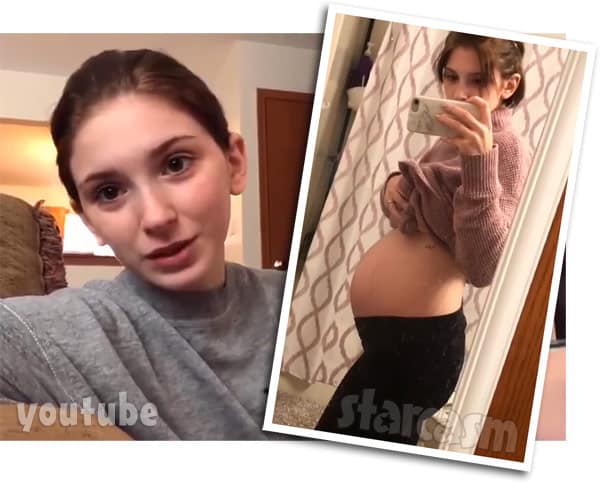 On Sunday night’s episode of Unexpected it was finally revealed that McKayla Adkins is pregnant for a second time, which we first reported early last month. The official reveal on the show meant that McKayla could finally talk about the pregnancy online, and she uploaded a YouTube video earlier today with updates recorded over the past few months.

“I’m sorry I couldn’t post this announcement until now,” McKayla explained in the video description. “I wanted to sooner but due to my contract with TLC Unexpected I was unable to.”

The sixteen-plus minute video (embedded below) includes numerous updates from McKayla, including the very first day she and Caelan found out, all the way up until this weekend. McKayla reads from her pregnancy journal, which includes her symptoms as well as a list of her daily cravings like hot fries, rotisserie chicken, and banana smoothies. McKayla also shared clips of her growing baby bump starting at 5 weeks, 2 days and concluding at 26 weeks, 1 day.

Here is a McKayla Adkins baby bump timeline compiled from the video: 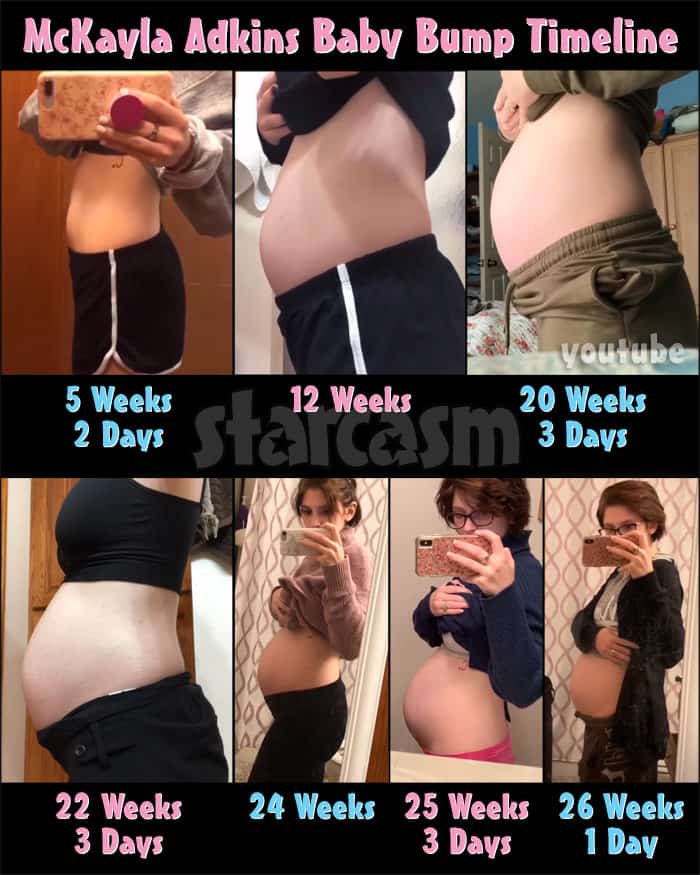 As of today, McKayla is 26 weeks and 2 days along. She says that the baby is completely healthy, and that her next video will include a gender reveal. [UPDATE – And here it is!]

In addition to announcing the sex of the new baby, McKayla says fans can expect A LOT of pregnancy videos coming soon. “I will be posting a ton a videos back to back about my pregnancy starting today!” she wrote. But, in an attempt to prevent some of the inevitable negativity, she shares a request for her viewers: “Please be supportive and positive and keep negative comments to yourself. A baby is a blessing and I’m a parent just like everyone else just at a younger age.”

For those viewers who are concerned after watching Sunday night’s episode, in which a very emotional McKayla revealed to her grandparents that she was pregnant again just after breaking up from Caelan once again, McKayla took to Twitter to assure everyone that she (and Caelan) are doing much better now.

Here are some of her interactions:

TWEET: McKayla and Caelan need to either work through their issues or break up for good because this off and on type of relationship is not healthy! Especially having a child in the picture.

MCKAYLA: Timothy doesn’t know what’s going on and we always keep him #1 in any situation we’re in. We’re going to couples counseling and our relationship is amazing now. The last breakup (which you see tonight) really made me realize Caelan is my person.

TWEET: I think they get back together because she’s pregnant again. She posts things on social media. I hope they’re doing well.

MCKAYLA: We got back together bc we love each other. You guys need to realize being 17 & 18 and having a baby, moving in together and consistently having people weigh in on our relationship is why our relationship was so rocky. Not to mention we were being rushed into a wedding.

TWEET: So is baby #2 Caelan’s or is he your one night stand’s? Thanks for those spoilers in the commercial @TLC

MCKAYLA: LOL CAELAN IS THE ONLY PERSON IVE HAD SEX WITH. Just bc I’m a young mom doesn’t mean I sleep around. #ignorant

MCKAYLA: I’ve already explained why I’ve had trouble with protection. If you’re interested feel free and check it out.

MCKAYLA: Not your life, not your decision

TWEET: I know the comment sounded bitchy – it wasn’t meant to be. I have three kids under the age of 5. It’s VERY hard & I’m in my early 30’s. I never could have done it at your age. I think most of us are genuinely concerned for you

MCKAYLA: You don’t need to be concerned for me. Me and Caelan both have jobs, our own place and Timmy is happy and healthy. We’re normal parents just like you so we shouldn’t be treated as less.

TWEET: Totally understand @mckayladkinss stress with having to tell her grandparents she’s expecting again. Maybe that was part of the issues with her and Caelen. #unexpected

TWEET: The issues were likely very strong pregnancy hormones. That’s my guess. I’ve been there ?

MCKAYLA: I had very bad depression in the beginning of this pregnancy (I think it’s called pregnancy blues?) and TLC happened to film me telling my papa while it was hitting me really hard. Luckily once I past my 1st trimester so did the depression!

Congratulations to McKayla and Caelan! There’s no doubt they have a difficult road ahead, but I’m certainly pulling for them. Although she has hinted that she may not be back for another season of Unexpected, I hope that isn’t the case and we will be able to continue following her on TLC as Timmy welcomes his little sibling. But, either way, we will all be able to keep up by following McKayla’s YouTube channel — which she started before being cast on the show — so be sure to click and subscribe!

Meanwhile, be sure to follow along with her pregnancy journey (on a slight delay) with new episodes of the current season of Unexpected airing Sunday nights at 10/9c on TLC!