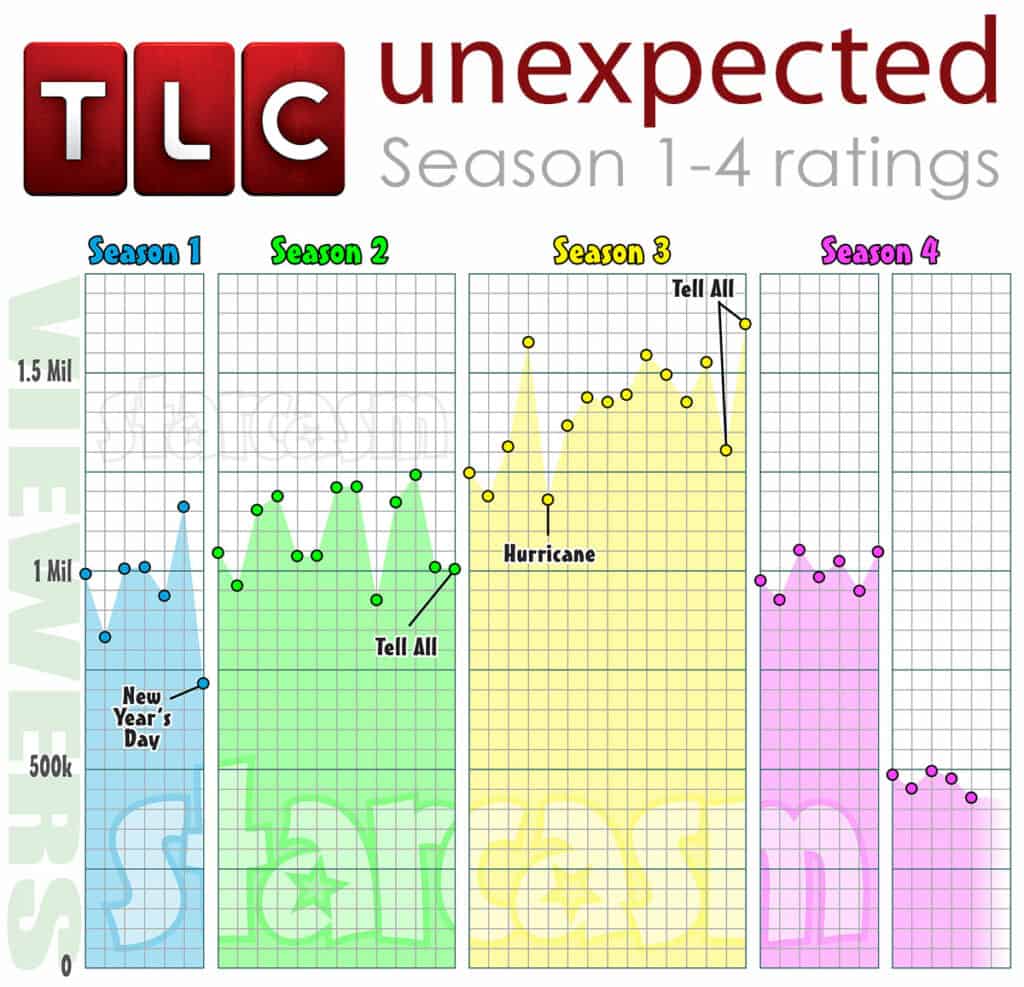 TLC had a breakout hit with its teen pregnancy reality series Unexpected. Roughly one million viewers tuned in for the show’s premiere in November of 2011, and through the first two seasons it was able to average over a million tuning in every week. The ratings took off even further during the show’s dramatic third season as an explosive two-part Tell All helped push the season’s average viewership over 1.4 million per episode when it wrapped up in November of 2019.

The show took more than a year off before returning for a fourth season in December of last year. The hiatus stifled the ratings momentum a bit, but the Season 4 premiere still delivered 978,000 viewers.

The new season aired seven episodes before living up to its title by taking an impromptu mid-season break, reportedly due in part to the mysterious removal of cast members Reanna Cline and Taron Ward. Over the course of those seven episodes, Unexpected managed to maintain steady viewership with an average of just over one million viewers a week.

Reanna & Taron have reportedly been cut from @TLC's #Unexpected in the middle of Season 4 and will not be included when the show returns in March 😬 (Tyra recently hinted that she is done, but she and Alex were included in the 4B preview trailer.) https://t.co/QVagHWTBpn

Season 4 returned on a new night on March 15, and the ratings took a huge dive right out of the gate. The March 15 episode brought in just 493,000 viewers in its new Monday night slot. The numbers dipped even further in the four subsequent episodes, with the average ratings since the show’s return equaling just 469,000 per episode. That is exactly one third of the show’s average ratings per episode during Season 3!

There are two very important factors I should point out. Number one, TLC’s parent company Discovery launched their discovery+ streaming service earlier this year, which must have impacted traditional television ratings. Number two, the show used to have the sweetest reality show time slot in the entire cable television universe as it aired behind the various 90 Day Fiance shows airing on Sunday nights.

#Unexpected #SPOILER! Alex has a new baby sister and his daughter Layla has a new aunt… who is 2 years younger than her! Meet Julie's daughter Nevaeh, who looks like Layla's twin! Do they share the same father? Julie answers that question! #UnexpectedTLC https://t.co/hBI2rNWfZ3

Discovery+ launched on January 4, which was right in between the third and fourth episodes of the current season of Unexpected. Surprisingly, the launch didn’t seem to have any real impact as the show’s ratings remained steady through January 31.

I should also point out that the discovery+ has gotten behind with their Unexpected updates. It’s unclear why, but subscribers have been unable to view the two most recent episodes. In other words, I don’t think discovery+ is a big factor in the lower ratings over the past five episodes.

On the other hand, the move from Sunday night to Monday night most likely had a huge impact on the ratings. To be honest, I’m thinking that TLC might have been a bit disappointed that the series couldn’t bring in much more than a million an episode in such a prime slot, so they swapped in Sister Wives instead. The long-running plural family series pulled in 1.64 million last Sunday, and 1.43 million the week before.

#Unexpected Jenna's dad Matt Ronan defends his #3Percenters tattoo, which TLC has been blurring out due to the far-right militia group's perceived association with white supremacists — an association they have publicly denied. https://t.co/EMBmPjdz1B pic.twitter.com/fya25U3CcD

A lot of the Unexpected chatter online this season is about how the show is a bit boring and how producers seem to be drawing out the story lines too much.

My theory is that part of what makes the current season a bit boring to Unexpected viewers is the fact that pretty much all of the dads are trying to step up and actually be dads. Also, none of them seem to be, um, troubled or easily despised. The previous season of the show (and other similar shows like the Teen Mom franchise) featured numerous dads that were horrible for the moms and children, but great for TV ratings!

The show’s ratings peak was the second part of the Season 3 Tell All when Hailey 2 dropped the bomb that she was pregnant with Matthew’s baby. (TLC was actually filming Matthew and the Haileys for the current season, but that reportedly fell through thanks to Matthew’s inability to refrain from using the “n” word on social media.)

And who could forget Max or Anthony?

We've obtained the police report from Thursday's arrest of #Unexpected dad Anthony Vanelli. A woman alleges that Anthony came at her with a knife because he was upset with how the man she was with treated her. Yikes! Get all the exclusive details! https://t.co/1MVm4nZo6z pic.twitter.com/3WcU2gGwOZ

The Season 4 hiatus was reportedly due to re-editing after Reanna’s departure, but I’m wondering if it wasn’t a little more than that. Perhaps producers wanted some time to try to do some editing to ramp up the drama a bit? Like the tension between Aden and Jenna, as well as Tyra and Alex?

What’s funny is that the Tell All is promising to have some fireworks, but it’s the grandparents lighting the fuse. In case you missed it, Ethan’s parents Michelle and Charlie have split up and Michelle kicked Myrka out of her house in dramatic fashion! Actually, the grandparents have stepped up this season to fill the villain roles well. Unfortunately, I don’t think it was enough. 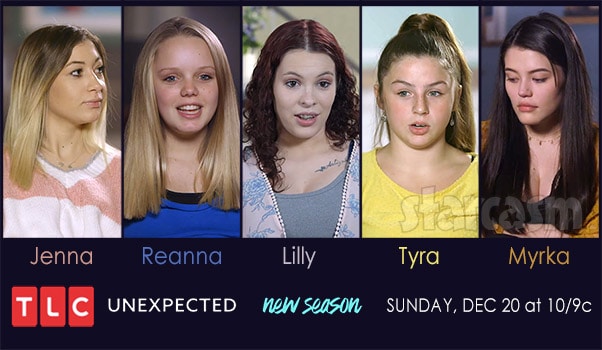 Will Unexpected be cancelled by TLC? I seriously doubt it. The production costs on the show are relatively low, thanks in large part to not paying cast members hardly anything at all. Plus, I believe the addition of two or more dramatic new couples would be all that was needed to turn things back around. I fee confident TLC will give it another season at least.

On a positive note, Unexpected’s ratings are pretty close to the genre’s OG, MTV’s Teen Mom OG. Amber, Maci, Catelynn, Cheyenne and Mackenzie have managed to bring in an average of just over 500,000 viewers over the past two weeks. That’s a far cry from the show’s heyday when its Season 2 Reunion pulled in more than 5.6 million viewers.

Want to chat about the ratings for the current season of Unexpected? Join the conversation over on Instagram: