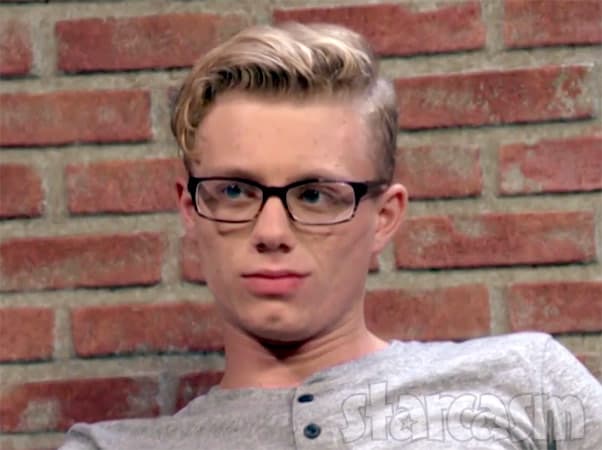 Unexpected dad Shayden Massey continues to live quite the eventful life after his split from Lexus Scheller late last year. Less than two months after the 20-year-old revealed that he was going to be a dad again with a young lady that wasn’t his new girlfriend, Shayden was back behind bars in Indiana after being arrested early Monday morning.

According to jail records, Shayden was booked at 6:39AM on April 27. The charges listed include an outstanding warrant and possession of a controlled substance. There isn’t much information available on the outstanding warrant or the drug possession charge at this time. We will continue to look into it and will update when we know more.

UPDATE – According to court records, a warrant was issued for Shayden on February 5 as the result of a Petition for Revocation of Probation stemming from his October conviction for driving with a suspended license, marijuana possession, and paraphernalia possession. It appears that he also has a court appearance scheduled for May 12 stemming from a separate incident in March of 2019 in which Shayden was charged with driving on a suspended license and possession of drug paraphernalia.

Shayden has an active bond listed for his warrant, and a $250 bond for the drug possession charge. Jail records indicate that Shayden has posted the $250 bond and is scheduled to be in court for a hearing on June 12.

Shayden is not stranger to legal issues or spending time behind bars.

According to the probable cause affidavit, Shayden was pulled over for speeding on March 12 of last year after being clocked going 55 miles per hour in a 40 mph zone. Once Shayden was pulled over, he informed the officer that he didn’t have a valid driver’s license, and he was unable to produce any identification. That’s when Shayden was introduced to a furry little feller named Darro.

I then deployed my K9 partner Darro and conducted a free air sniff around the vehicle. Darro had a change of behavior on the rear driver’s side door of the vehicle. The two other passengers and the driver were searched but nothing of evidentiary purposes was located. Prior to the beginning of the search Shayden advised me there will be a very small amount of marijuana and paraphernalia in the vehicle that belonged to him. During the search of the vehicle there was four smoking devices located with the odor of marijuana emitting from them, and a multi-colored “grinder” with a greenish plant like dust inside it. The evidence was later transported to the Peru Police Department and placed into temporary evidence storage.

Shayden was issued a speeding ticket, as well as citations for driving with a suspended license and possession of drug paraphernalia. Shayden mentioned that he “served a couple weekends in jail” late last year, which looks to be the culmination of a series of incidents in which Shayden insisted on driving on a suspended license.

Here is a timeline of Shayden’s legal issues from Indiana court records:

As a result of some of his legal issues, Shayden had an arrangement where he spent “a couple weekends” behind bars late last year. It was during one (or more?) of these weekenders that Shayden says Lexus cheated on him with his best friend.

“[Lexus] cheated on me with my best friend when I served a couple weekends in jail for driving without a license when I was omw to work,” Shayden revealed back in January. “She left me saying it was all me,” he added. “[I] didn’t find out she cheated until about a month after she kicked me out.”

Shayden later moved on with a girl named Meah. However, things got pretty complicated last month when Shayden posted a sonogram on social media and later revealed that he was going to be a dad again with a girl he hooked up with prior to dating Meah.

I’m not sure what Shayden’s current relationship status is with Meah or with the new baby momma to be.

If you’re curious what Shayden looks like while inebriated, smoking indoors, and falling on his face, I will send you off with some videos of him posted recently by his sister:

You see what i gotta deal with here

UPDATE – It seems that Lexus was completely unaware that Shayden was in this inebriated state in front of their daughter Scarlett. “What the f*** Jewels???” she asked in the comments of the video after our post. “Why wasn’t I called to come get my daughter. This is absolutely ridiculous.”

COMMENT: You definitely should have been called please tell me you went to pick her up!!!

COMMENT: These videos were posted a week ago. Lexus should have been told about this when it was occurring. Not a week and a Starcasm article later.

UNEXPECTED Max Schenzel pleads guilty to felony theft, is he still with Chloe?