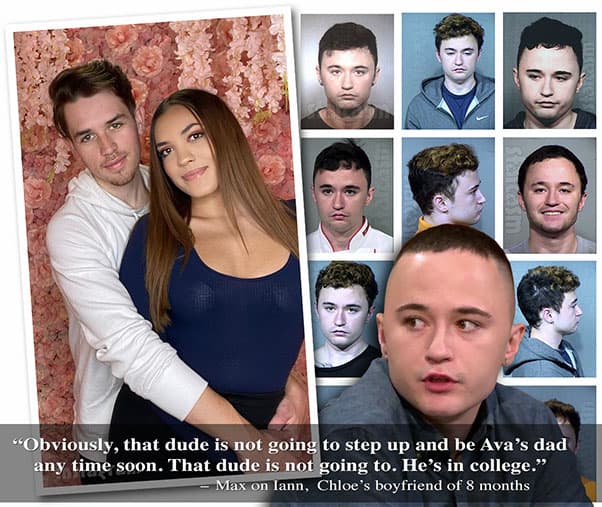 Former Unexpected dad Max Schenzel has been arrested more than a dozen times over the past few years for offenses including drug possession, theft, and domestic assault. He currently has two pending charges for domestic assault and is unable to see his daughter Ava due to a restraining order put in place by his ex, Chloe Mendoza.

Meanwhile, Chloe has been dating a fellow college student named Iann for more than eight months, and the two of them are even working on a podcast together. Chloe’s family and social media followers have been hugely supportive of her new relationship with Iann. Max? Not so much.

Max has been working on growing his YouTube channel, and in his latest video he attacks Iann in a bitter rant.

“Also I’ll be addressing a couple other things,” Max continues his intro, “like what I think the future looks like for me and Chloe, my progress as far as, you know, getting my daughter back in my life, and then probably just addressing a couple random things I’ve had on my mind lately.”

Max reminds viewers that he and Chloe “haven’t been together for a while” before moving on to sharing his insights on Iann.

“She’s been dating this new guy named Iann, and I’ve never met the dude,” Max says. “I don’t know for sure, I’m guessing that this dude’s probably around my daughter a lot and everything.” Given that Iann is around Ava, Max thinks that it is normal to expect to be able to meet him. “I think that’s important, you know what I mean? Normal families do that.”

Max says that he and one of the guys he is currently living with tried to follow Iann on Instagram, but Iann blocked them because he “didn’t want anything to do with us.”

Max interpreted Iann not wanting to interact with him on social media as “this same type of, you know, bs drama. Like, he doesn’t want to talk about anything.”

I will take a break from Max’s rant to insert my personal take here. If you are dating someone whose ex has an extensive criminal history, as well as an extensive history of creating and exacerbating online drama, then it seems like the mature thing to do to block that person. Especially if there is a child(ren) involved.

But, what I consider to be mature is what Max considers to be dramatic and “goofy.” He also sees it as an indicator that Iann will not be able to step up an be father to Ava. (To Max’s credit, he is the world’s leading expert on not stepping up and being a father to Ava.)

It just showed me, like, this dude’s a goof. He’s a — he’s a goof. Like, he’s just straight up goofy, and I don’t see why she’s dating him…He’s not gonna be a father to Ava. He’s not gonna, you know, do anything that a father should do, and it’s, like, I don’t understand why she can’t let me see my daughter, but she can spend time with this dude that goes to ASU that she just met. At least let me see my daughter when you guys go, you know, to the movies or out to eat or something.

Max argues that he should be able to see Ava since Iann gets to see her and he is just some “random” guy.

At this point in the video, Max brings up the fact that he isn’t the only one who has been shut out of Ava’s life. He says his dad, Todd Schenzel, is also unable to see her or talk with her. “My dad literally has to wait for Chloe to post pictures of Ava to see her, to see how she’s doing, and this, this dweeb, this little freakin’ Harry Potter looking dude gets to see my daughter all the time…That’s cool. I’m not jealous of that. That’s cool, bro. But, if you’re gonna let some random dude you just met and started dating, at least let me see her.”

So what about the abuse allegations against Max? He continues to deny that he ever hit Chloe or kicked Ava in the back. “It’s complete bs,” he insists in regards to the Ava kicking allegation. “I did not do that. I would never, ever lay a hand on my daughter — ever, ever, ever — no matter how angry I am.”

Max eventually circles back around to being frustrated with Iann, especially with the fact that Iann gets to see Ava and he doesn’t.

Even if he’s got to see her one time, that’s some bulls**t because I haven’t been able to see her in two years. And you guys can call me immature or whatever for going online and talking about this, I just want you guys to see this because I care a lot about my daughter and that dude is a goof. That dude is a straight goof. I’m sorry, I’m not trying to be a d*ck, but that fool’s a pu**y. That fool’s a straight b*tch. He’s literally in the videos you can see him — he’s just literally, like [Max makes silly faces]. Obviously that dude is not going to step up and be Ava’s dad any time soon. That dude is not going to. He’s in college. I don’t know that much about him. I don’t really want to know that much about him, but I know for damn sure he’s not gonna step up and be Ava’s dad. 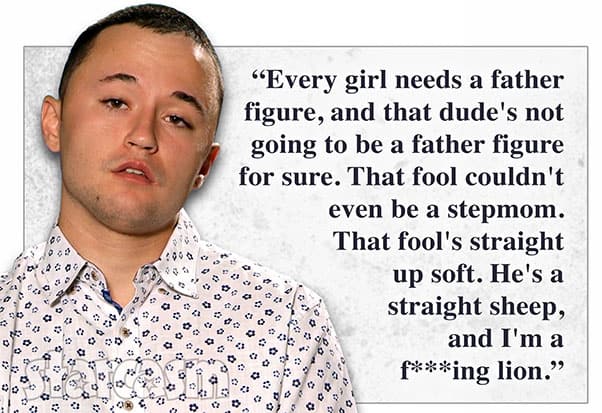 And yo, you and your family can say whatever you want about, “Oh, Ava doesn’t need a dad,” or whatever, but she does, alright? Every girl needs a father figure, and that dude’s not going to be a father figure for sure. That fool couldn’t even be a step mom. That fool’s straight up soft. He’s a straight sheep, and I’m a f***ing lion. Like, that dude is soft bro. That fool Iann, Chloe’s boyfriend, it just looks like his breath stinks. Like, I can look at him and just tell that fool’s breath just smells like straight sh*t bro. Like, straight up dude, I can tell, like, a hundred percent. I can also tell that fool looks like he f***ing f***s his cousins, like he has a hillbilly cousin named Michelle that he just goes over to her house every weekend and f***s her.

He’ll be talking, then Chloe will start talking. He’ll just be, like, he’ll just sit there and put his hands together and, like, sit there and let her talk. I don’t know the dude that well, but I can tell that he’s just exactly what Chloe wanted. Like, Chloe wanted me to be her little b*tch, her little Nate. Like, Jessica, Chloe’s mom, Nate’s her b*tch. Let’s be honest right now. That’s her b*tch. And I wasn’t down to be Chloe’s b*tch. So she and me had to break up so she could go find her little b*tch.

Regardless of whether or not Max’s opinions about Iann are justified, is YouTube really the place to air that out? “I probably wouldn’t want my daughter to see this,” Max admits, “but we’re we’re doing it — we’re doing it for the viewers.”

If you recall from earlier in this post, Max talked about Iann blocking him on social media as an indication of Iann being dramatic. If that didn’t seem like an illogical conclusion to you before, Max makes it perfectly clear how illogical it was when he brings up being blocked once again. “I was gonna look you up, Iann, and just roast you some more, but you blocked me because you’re a pu**y,” Max says.

Max assures Iann that he is not interested in being with Chloe again, and the focus is on being able to see Ava.

The video concludes with Max reflecting on his motivation to make this video, and the videos soon to come:

I went off on a couple different things in this video, but the main point of this video is, like, call it jealousy, you know, call it whatever you want — I’m just venting. And since I can’t vent to the person that’s doing this to me, then I’m just gonna put it out there for all of you to see it. Yeah, I can’t directly go up to this person or these people, so I’m just putting it out there for you all to see it…

It’s time. I’m done being a pu**y. I’m done not speaking my mind because I went through a lot of sh*t on that show, and I cared about what everyone thought, you know, I cared about what people thought that were around me at the time. And I don’t give a sh*t now. I honestly don’t care, and I’m at the point of growing my YouTube from the ground up to where right now is the time to figure out what people are going to be watching my videos like… because these are the kind of videos I want to make. I just want to dog people and I just want to talk sh*t. I don’t care, I just want to speak my mind. The show made me say all this fake stuff and I just want to be real with you guys.

After Max posted his Iann-bashing YouTube video, Chloe and her mom, Jessica Bowman, were inundated with comments and messages making them aware of what Max was saying. Both Chloe and Jessica showed that they are seasoned veterans when dealing with Max’s attempts to get a rise out of them online as they both essentially shook their heads with non-responses: 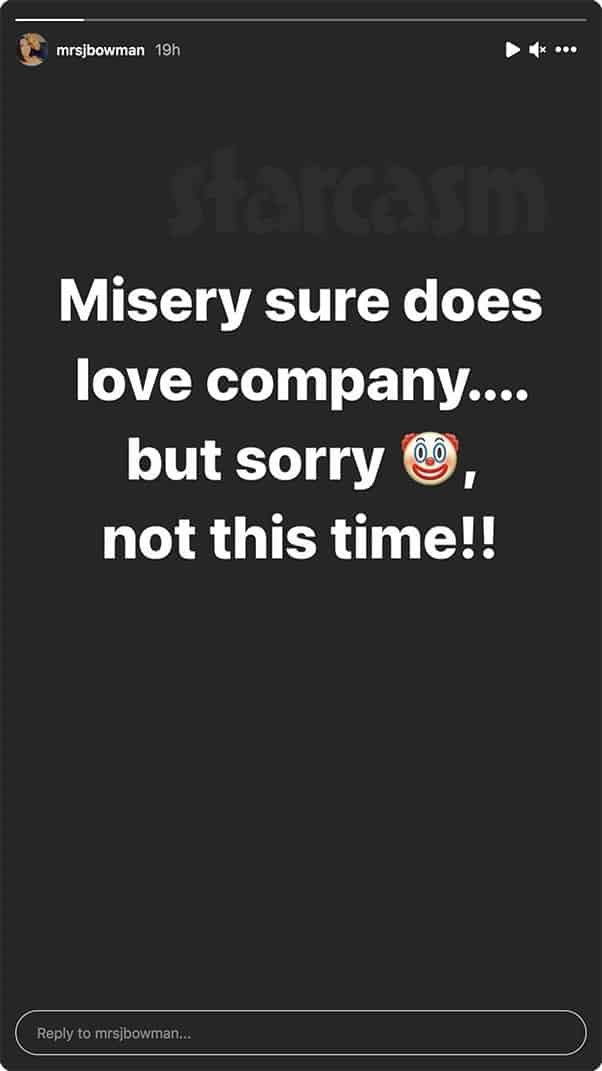 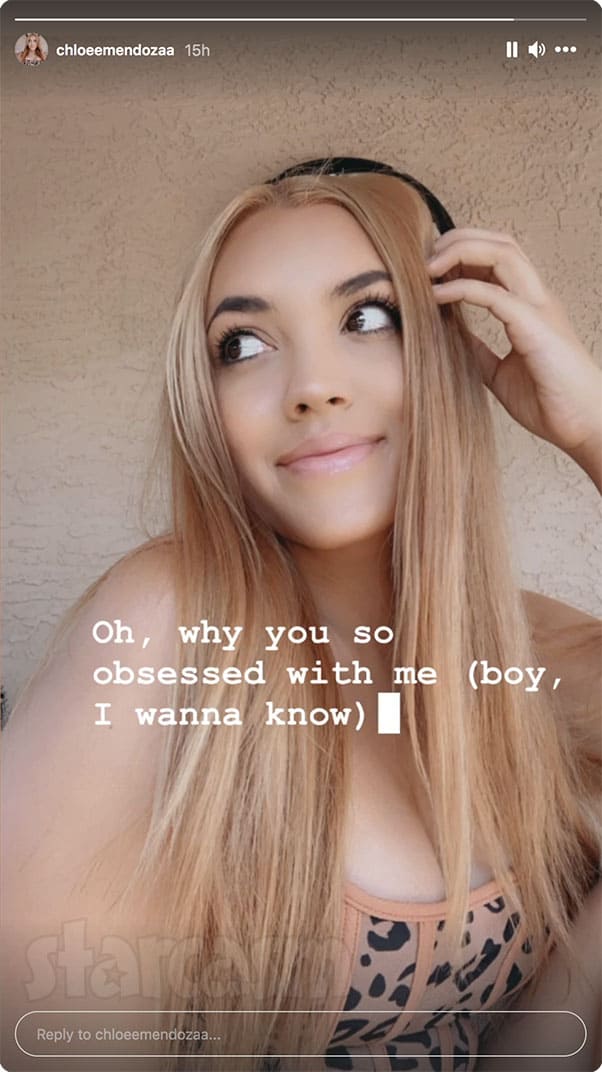