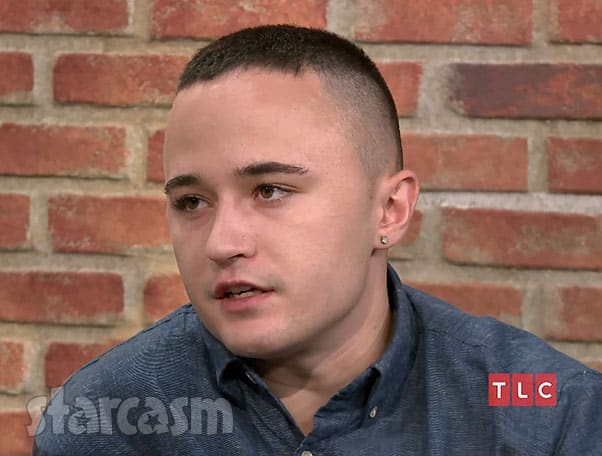 Unexpected dad Max Schenzel reveals in a new video that the restraining order preventing him from having contact with his ex Chloe Mendoza or their daughter Ava has been renewed.

Max shared the update with a YouTube vlog posted on Tuesday. The 21-year-old former reality star says that he got a call from local police while he was at work earlier that day. “Keep in mind, the restraining order with my daughter and Chloe expired recently — like a couple days ago,” Max interjects, before continuing to tell his story.

One of the stipulations of the order is that Max is to have no contact with Chloe, including text messages. Max admits that he did contact Chloe, but he argues that it was not confrontational and was only in hopes of being able to see his daughter again.

“The message said basically…’Hey, I’ve been doing good. I’ve been sober for a year. I miss Ava. I want to know what you want me to do to see Ava. I want to work as a team, you know? I want to co-parent with you and just be parents, you know? We don’t have to be together.'”

Max’s text plea only made things worse. “Chloe took that message that I sent and used it against me to get another restraining order.”

“I did violate the order by sending that text,” Max continues. “So yeah, it sucks. It really does.”

Max further expresses his frustration at having the communication used against him. “I sent her a text message having to do with my daughter…It’s not like I was texting her to talk to her. It’s not like I was threatening her, hurting her — anything like that.”

#Unexpected dad Max Schenzel goes on a VERY long IG rant against Chloe Mendoza and her family. Get the unabridged version of all of Max's posts, plus a full recap of his numerous interactions with commenters. #UnexpectedTLC https://t.co/PXHoVv4fes pic.twitter.com/JisZqWqCeN

Max describes his reaction to the call as “demotivating” as he iterates all the progress he has been making over the past year. “It’s crazy how [Chloe] doesn’t see any of that. I mean, I get why she doesn’t because she’s not in my life anymore, but I feel like if Chloe could see all the progress I’ve made she would let me see Ava.”

Once again, Max is reluctant to place most of the blame on Chloe. He says Chloe refuses to acknowledge his positive changes “because her family’s around her making her think all these negative things about me.”

Max mentions that Chloe’s family members have expressed disbelief in his sobriety claims. Max points out that he has to remain sober because of his job and parole stipulations, adding that he gets randomly drug tested for both.

“I feel like Chloe and her family are doing this in spite of, like, my past and how I was in the past,” Max explains. “Obviously, because they can’t see who I am now, and they haven’t — I haven’t even seen them in, like, I don’t know…close to two years? Like a year and a half, a year? Around there. That’s a long time. Like, someone could change drastically in that amount of time.”

Max says he plans to appeal the judge’s decision to renew the restraining order.

More from Max on what he wants as far as his relationship with Ava, Chloe, and Chloe’s family:

I do wish them the best despite, you know, everything we’ve been through in the past and, like, what’s going on right now…I do hope to someday be on civil terms with them, be able to be not necessarily a family — like, yes, I want me and Ava to be a family, but I want me and Chloe to be civil so that we can co-parent and be healthy parents for Ava…and also for her parents to be civil with me so Ava doesn’t have to see them, you know, hating on me or talking about me behind my back. Because Ava will hear that, and that just isn’t good when you’re raising a kid.

#Unexpected Max Schenzel is currently in jail and won't be getting out until 2021 after being sentenced to 6 months on Wednesday. His two separate charges of domestic battery are still pending. https://t.co/j7LUxPT6in

Max wraps up his video by revealing that his short-term goal is to get supervised visitation with Ava. “The long-term goal’s to get half-and-half custody with, or shared custody with Chloe,” he adds.

The video includes “Going to court” in parentheses in the title, but Max doesn’t really touch on that subject in the video. I assume it was referencing the fact that he had a court hearing on Tuesday in regards to the two outstanding domestic assault charges against him. It doesn’t appear that anything major happened in court as both cases are now scheduled for another non-witness review hearing on May 11.