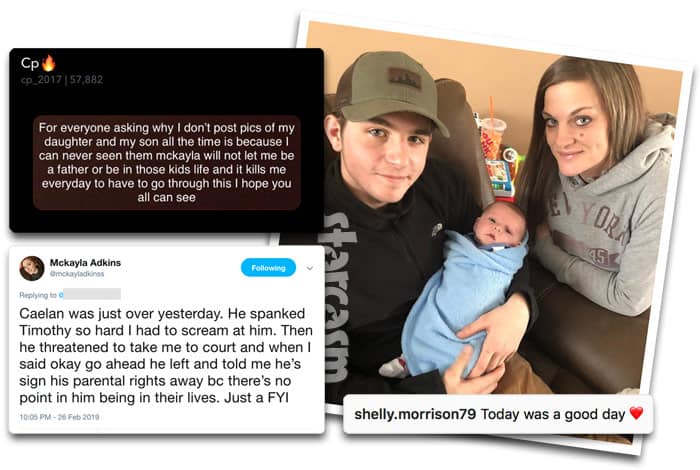 Unexpected couple McKayla Adkins and Caelan Morrison had a huge falling out just before the birth of their daughter Gracelynn on January 29. That falling out spread to both of their families and to social media last month as harsh accusations were hurled both ways on Twitter.

The tensions have apparently not lessened at all as the heated tweets and posts continue, including Caelan’s Snapchat post last week doubling down on his claim that McKayla is not allowing him to see his son and daughter:

For everyone asking why I don’t post pics of my daughter and my son all the time [it] is because I can never see them. McKayla will not let me be a father or be in those kids’ life and it kills me everyday to have to go through this. I hope you all can see.

Caelan later responded to the boyfriend of McKayla’s mom on Twitter, who insisted that it was Caelan’s family who was to blame for all of the tension. “Everyone sees how McKayla acts and knows she’s wrong,” Caelan tweeted. “I spent way to many years in a toxic relationship with someone to spread lies about me to the world which our kids will see when they grow up then you will wonder if y’all were right or wrong.”

McKayla was also active on Twitter last week sharing her side of what was going on. Here is her tweet in response to Caelan’s Snapchat post above and the ensuing conversation:

MCKAYLA: He was just over at my house and left bc I told him he’s not seeing our kids outside of my home bc I don’t trust him, he doesn’t have a reliable car or a car seat for that matter and he was p!ssed bc he spanked Timothy really hard and I freaked out on him.

TWEET: lmao I have the same rules in place for my daughters dad because I don’t trust him, no car, etc. and I’ve heard the “you’re keeping me from her” speech before, it’s gross how you can want the best for your children and they just try to twist it into something ugly like that.

MCKAYLA: Exactly. Regardless of being slammed on social media and people assuming the worst about me I will do anything and everything to protect my kids and make sure they’re okay. They’re my priority and always will be. I don’t care about Caelan’s feelings, as long as my kids are safe.

CAELAN’S AUNT SHARI: Wow? I’m not even commenting on this like I want to, but it’s just sad that you are keeping Timmy from family that loves him. We were all fine to keep him every Sunday but now all the sudden we are the worst family. All we can do is pray that God will intervene. We love you kids

MCKAYLA (Responding to someone else posting Caelan’s snap): Caelan was just over yesterday. He spanked Timothy so hard I had to scream at him. Then he threatened to take me to court and when I said okay go ahead he left and told me he’s sign his parental rights away bc there’s no point in him being in their lives. Just a FYI

MCKAYLA’S MOM’S BOYFRIEND JAY: Its important everyone sees this behavior for what it is. A complete fabrication of the facts in an effort to camouflage your own shortcomings. @mckayladkinss is at peace with her decision. @caelan12111 and his family have lied and manipulated the truth. #unexpected update.

JAY: You can either run back to the furnace or stop by and we can talk about it. Until then any single lie you post will be rebuked and trust me it’s gonna get ugly. Who posts a claim your kids are being kept from you 20 minutes after you visit? Bro you are lying lying … #unexpected

Despite the continued animosity, Caelan and his mother Shelly did get an opportunity to be with his kids this weekend, and she shared a series of images in a gallery posted to Instagram. “Today was a good day ❤️,” she captioned the gallery, which was posted on Sunday.

Meanwhile, it appears as though McKayla may already be moving on as she has been quite flirty with a feller named Josh Steer on social media. The two have been tagging each other with numerous memes and funny clips that have all the earmarks of a dating couple. Here’s an example: 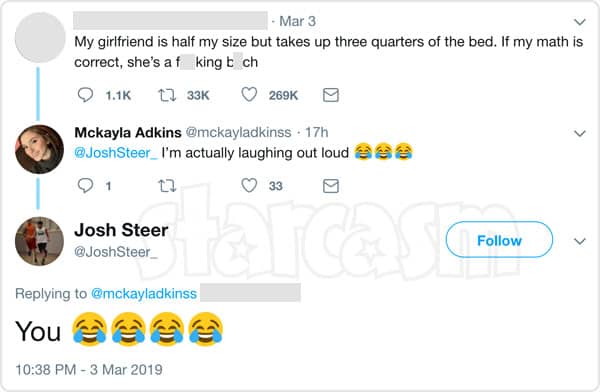 Hmmmm… Perhaps we will be seeing more of Josh on the next season of Unexpected?

TLC UNEXPECTED Are Emiley and Diego still together? Plus, photos of their baby daughter Aria! SPOILERS