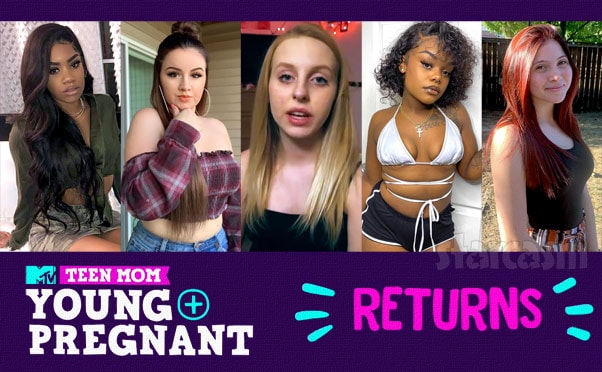 Despite disappointing ratings and numerous rumors online that Teen Mom: Young and Pregnant was canceled, there has been no confirmation on the fate of the series — until now.

Teen Mom production guru The Ashley just revealed that MTV will indeed be bringing the show back for a new season! “Although the contracts have not officially been signed yet, The Ashley is told that all of the girls from Season 2 – Kayla Sessler, Ashley Jones, Rachel Beaver, Kiaya Elliott and Brianna Jaramillo — will be back for the next season.”

Given the current situation with the coronavirus pandemic, MTV will be taking extra precautionary measures with their production teams for each of the moms. The Ashley reports that filming for the new season will begin in the third week of September, but the film crew will be already be on the clock as they all quarantine for two weeks prior to filming.

Unlike previous seasons in which producers filmed on and off, The Ashley revealed back in July that the crews will film for roughly seven weeks straight after their two-week quarantine period is over.

“Everyone will be tested [for COVID-19] every two weeks, and get their temperature checked every day,” a production sourced revealed to The Ashley.

The renewal news comes as a bit of a surprise to fans, and even to us Teen Mom bloggers. As Starcasm documented in a series of posts, the ratings for Teen Mom: Young and Pregnant have been in a steady decline after the strong debut in the first half of Season 1. The last three episodes of the most recent season that aired earlier this year averaged less than half the 900,000+ viewers that tuned in for the show’s eleventh episode that aired in May of 2018.

Apparently, fans and bloggers weren’t the only one surprised by MTV’s decision. “The renewal came as a shock to both the girls and most of the behind-the-scenes people behind the show,” The Ashley reports.

The network, which has struggled to find successful new reality show concepts, looks to be fully committed to their once-dominant teen parenting franchise. In addition to a new season of Teen Mom: Young and Pregnant, new seasons of Teen Mom 2 and Teen Mom OG are also in the works.