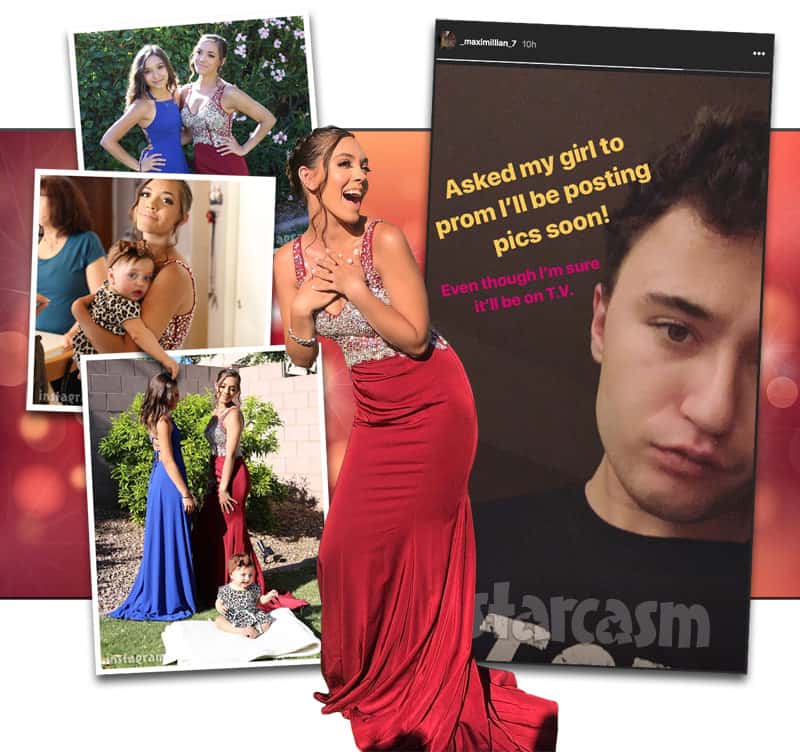 This was prom weekend for Unexpected mom Chloe Mendoza, and she looked AMAZING in her dress as she posed for photos with her equally AMAZING looking daughter, Ava! But where is Ava’s dad, Max?

First, the photos. Chloe and her mom Jessica shared lots of pictures of Chloe in her full-length sleeveless red dress, while Ava was rocking an animal print top and brown headband and bow:

Sorry but I had the best dates.

“Sorry but I had the best dates,” Chloe captioned one of her galleries on Instagram — which also included her friend Madison. Madison shared some photos as well, and she had a message for Chloe: “Here’s to your first and last prom, love you and can’t wait for Ava first dance ?.”

Chloe implying that Ava and Madison were her prom dates had a lot of fans (and this blogger) scratching their heads. Earlier this month, Ava’s dad Max Schenzel posted a selfie on Instagram and wrote: “Asked my girl to prom I’ll be posting pics soon!”

So what happened? Where is Max?

It is possible that Max still took Chloe to prom, but they didn’t share photos of themselves together in order to avoid spoilers for the new season of Unexpected. However, the two have already revealed on social media that they are still together — even after Chloe’s mom Jessica took out an injunction against harassment against Max last year. (Jessica later had the injunction tossed prior to its expiration, allowing Chloe and Max to once again be together.)

Others have speculated that perhaps Max was too old to be allowed to attend, but given that he is only 19, that doesn’t seem likely.

It should be pointed out that Max is a convicted felon. Perhaps Chloe’s high school has a policy about not allowing felons to attend school events like prom?

Max has basically gone radio silent on social media, and Chloe hasn’t been posting anything about him either. So, at this point, all we can do is speculate. If Max actually was in attendance, then I assume there will be a photo or two surface online soon of him and Chloe together. We will certainly keep our eyes peeled! (If you spot one, feel free to contact me with the link s at the bottom of this post.)

As we previously reported, Chloe has already been accepted into Arizona State University, where she plans to study speech pathology. Earlier this month, Chloe shared her official high school graduation portraits — and once again Ava stole the show:

Congratulations to Chloe! We can’t wait to catch up on her (and her family’s) story when Unexpected returns to TLC for a brand new season!