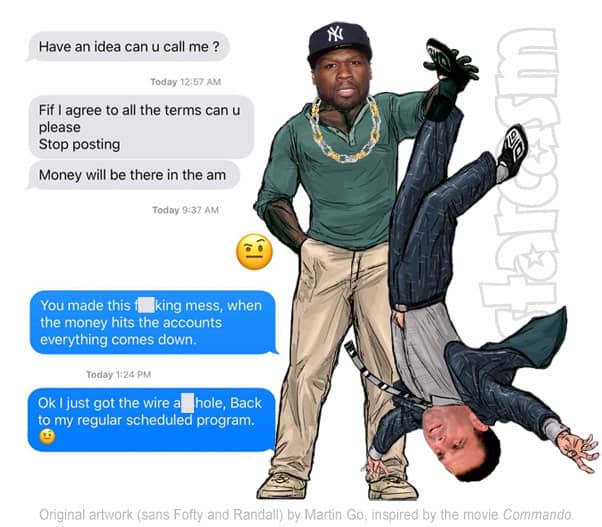 Just as soon as it all began, it’s all over. The whirlwind feud between 50 Cent, Vanderpump Rules star Lala Kent, and Lala’s movie producer boyfriend Randall Emmett is over after Randall reportedly paid “Fofty” the rest of the million dollars he owed him earlier today.

50 Cent shared a screen cap of an alleged text message conversation between him and Randall on Twitter. In the texts, which look to have started just after midnight this morning, Randall agrees to pay back the full amount he owed Fifty and says the rapper should expect to see the money in the AM.

Fifty was less than sympathetic as he maintained his angry collector posture with his reply, which began with a raised eyebrow emoji. “You made this f**king mess, when the money hits the accounts everything comes down,” he wrote.

At 1:24PM, Fifty replied to Randall indicating that the money transfer had gone through. “Ok I just got the wire a**hole, Back to my regularly scheduled program.” Fifty bookended his last message with another raised eyebrow emoji.

50 Cent’s tweet that accompanied the text message image was a lot more forgiving toward Randall. “I got my money, so I have no problem with Randall Emmett, in fact I’m wishing him and his family a very blessed day,” Fifty wrote. “? positive vibes now guys. LOL.”

Did you show up to work today ready to talk about #GameOfThrones but everyone else is talking about #Fofty? Here's a full recap of @50cent's feud with #PumpRules Lala Kent & her movie producer fiance Randall Emmett everyone is talking about! #MoneyMonday https://t.co/BDEIC8xxVE

Fifty promised in his text messages with Randall that “when the money hits the accounts everything comes down,” and unfortunately for the rest of us, Fifty followed through on that promise. He has completely scrubbed his Instagram account of all the posts about Lala and Randall — which had grown to quite a collection before today’s cleansing.

Here is a screen cap of Fifty’s account before the purge:

It’s unknown how this feud will impact Randall Emmett’s production career. Lala basically said that he dangled a movie role in front of her and the two had sex soon after her “audition.” She also stated that she began to receive lavish gifts, including a Range Rover, the very next day. Oh, and she admitted that she and Randall like to role play casting couch scenarios where she pretends to be an aspiring actress (complete with wigs and different names) as she approaches Randall in a public place like a hotel bar. The two then take the role playing someplace more private and consummate the audition.

Fifty flatly stated at one point during the feud that “There’s no difference between Harvey Weinstein and Randel Emmett!” (I want to make sure everyone notices that Fifty seems to intentionally misspell Randall’s name at every opportunity.) I really cannot imagine that Lala’s first date story combined with the role playing confession won’t brand Randall as a Harvey Weinstein type. And Fifty flat out saying they are the same during a very public (and very viral) feud would seemingly all but seal his fate.

Meanwhile, there’s one person emerging from this clash smelling like a rose — both in the public eye, and financially. In addition to having his million dollar debt repaid by Randall Emmett, 50 Cent also reportedly made roughly $300,000 selling t-shirts mocking the feud!

Here are the shirts (which appear to still be available for purchase) with a link:

Neither Lala or Randall have posted on Instagram since the debt was reportedly paid off.

I will leave you with Chrissy Teigen’s take on the whole thing, which is hilariously spot on — like most of her reactions to everything:

UPDATE – In hopes that the #Fofty trend will live at least a little while longer, we had a little fun replying to Fifty’s retweet linking to a ThisIs50.com article about how Drake Views album cover memes have stood the test of time:

UPDATE – We got retweeted by Fifty! It’s such an honor to officially be a part of this historic event!

* Original artwork (sans Fofty and Randall) at the top of this post by Martin Go, inspired by the movie Commando.