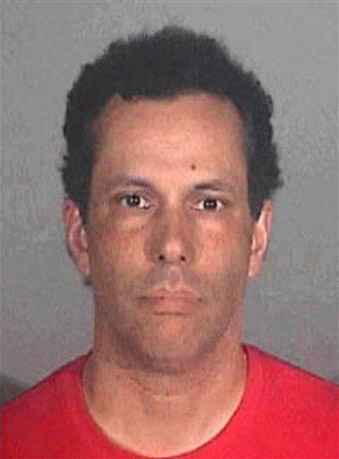 The host of The Food Network’s Calorie Commando and Weighing in, chef Juan-Carlos Cruz, was arrested in Santa Monica, California Thursday after allegedly soliciting homeless people to commit murder!

Several of the homeless individuals contacted the Santa Monica Police Department’s Homeless Liaison Program last week after they were allegedly solicited by Cruz. Cops conducted an investigation with their assistance and made the arrest Thursday afternoon.

Trying to hire homeless people to commit murder? It doesn’t take a culinary degree to realize that’s a recipe for disaster! Cruz is currently being held on $5 million bond. Authorities say they know the identity of the potential target but are not releasing a name.

UPDATE – TMZ has uncovered more of the details in the chef’s murder plot. The target was allegedly Juan-Carlos Cruz’s wife!

The men told TMZ an elaborate story. According to Little Dave, Cruz — who had a show on The Food Network — said he wanted someone to do “dirty deeds done dirt cheap.” He says Cruz told him he would give him “a grand.”

Cruz then gave Little Dave a box which contained a box cutter, a disposable cell phone, gloves and a pocket watch. He says Cruz gave he 1/2 of 10 hundred dollar bills, and promised to give him the other halves when the job was done. Little Dave says Cruz showed him a picture of the other half of the money.

Little Dave eventually brought in a couple friends and the three of them met with Cruz, who had devised a plan in which one of the men would cut his wife’s throat as she got out of her car at a location where Cruz dropped her off every day. TMZ later interviewed Big Dave at length as well as the other two (Little Dave and Shane) involved in the incident. (WATCH THE VIDEOS) Here’s a screen capture of Big Dave followed by the other two. I assume the man on the left is Shane and the man on the right is “Little” Dave: 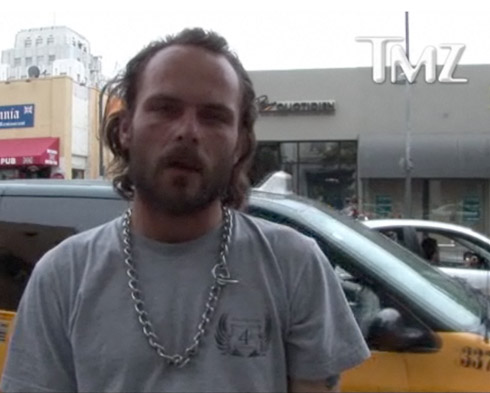 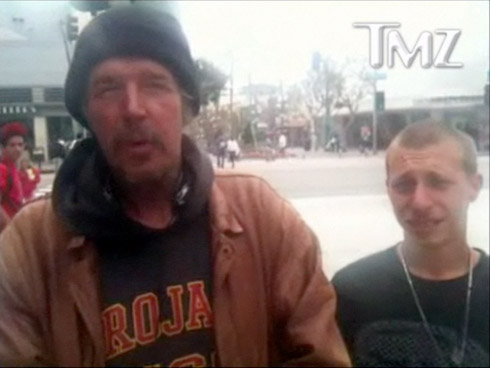 Another of the homeless men, named Big Dave, was arrested for loitering and told police about the Killorie Commando plot. The three men met with Cruz again, this time wired and being video taped by police. They expressed concerns about murdering the woman in plain site, so Cruz took them to his apartment and showed them the security code and instructed them to kill her as she walked into the apartment. Cruz was arrested shortly after.

Calorie Commando was a show that ran in 2004 featuring Cruz, who was first noticed after losing 43 pounds on the premiere season of Discovery Health Network’s Body Challenge. From The Food Network: “Juan-Carlos Cruz—a.k.a. the Calorie Commando—delivers the low-carb lowdown with heart-healthy recipes in each episode of this new series. From chocolate cake and potato latkes to burritos and french fries, Cruz guides viewers on finding smart alternatives for not-so-healthy food cravings with easy recipes for delicious treats that taste like the real deal.”

In addition to that show, Cruz also headed up the Food Network show Weighing In on which “Calorie Commando Juan Carlos Cruz heads up a saucy swat team designed to help people deal with their food issues. With a “satisfy, don’t deny” philosophy, Cruz helps three men and women slim down over a three-month period for a special event in their lives. Cruz shows participants how to rethink what they eat and how to satisfy themselves with delicious, healthy foods. A nutritionist is on deck to devise eating programs for each individual “loser” and trainers help them shape and trim up. At the end of the training period, the trio weigh in and receive a total makeover before their big event.”

Both shows (and Carlos) are no longer on the US Food Network site, but you can still find pages for Calorie Commando, Weighing In and Juan-Carlos on FoodNetwork.ca. From the site: 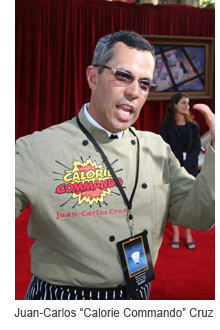 “Juan-Carlos Cruz, host of Calorie Commando began his culinary career at the California Culinary Academy, where he graduated in 1993, followed by an apprenticeship at the Amillios Restaurant in San Francisco, California. In 1994, Juan-Carlos moved on to the Stanford Park Hotel as Pastry Chef and then as Pastry Sous Chef at the Hotel Bel Air in 1996. During his five years with the Hotel Bel Air, Juan-Carlos created desserts for countless celebrities and was part of the team that represented the illustrious hotel at the James Beard House. Cruz was so successful at the hotel that in 2001 he decided to begin his own website, Pastrydude.com, Los Angeles’s premiere wedding cake destination, where his decadent creations are made to order. In addition to still running Pastrydude, Juan Carlos teaches pastry, bread making, advanced cooking techniques, and healthy spa cuisine in and around the Los Angeles area. 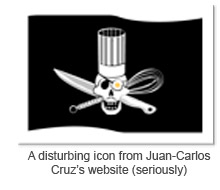 Recently, Juan-Carlos appeared on the premiere season of Discovery Health Network’s Body Challenge, during which he lost a total of 43 pounds, plus an additional 12 lbs after the show wrapped. With a newfound attitude toward food, Juan-Carlos began running Calorie Commando Catering with the mission of providing the best heart-healthy food in Los Angeles. Juan-Carlos feels that “there is no reason to feel deprived” when eating heart-healthy. He was also the host/weigh-in coordinator on Discovery Health Network’s Body Challenge 2 and Body Challenge 3. Other recent appearances include Soap Center for the Soap Opera Network, The Modern Girls Guide to Life for the Style Network, and Cooking School Stories on the US Food Network.”

Sweeney Juan, the Demon Chef of Santa Cruz also has a couple cookbooks! There is The Juan-Carlos Cruz Calorie Countdown Cookbook: A 5-Week Eating Strategy for Sustainable Weight Loss from 2006 and the as-yet-unreleased The Love Diet: With Simple Recipes (Cocktails, Too) For a Healthy, Happy, Sexy You, which he co-wrote with Fork Me, Spoon Me: The Sensual Cookbook author Amy Reiley. The latter book was due to be available June 1, 2010 so I wonder if this murder plot has something to do with that? Here are links to all of Juan’s books over at amazon including two for the Calorie Countdown book, just in case one sells out because of all the publicity: 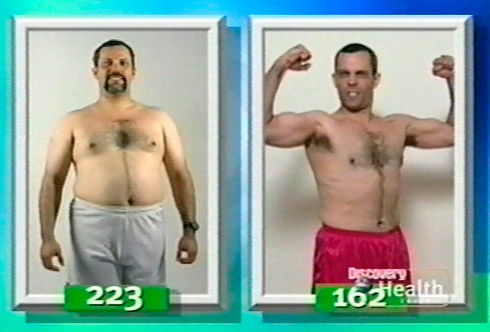