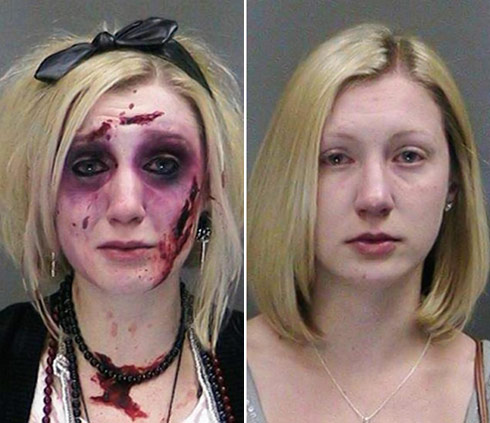 26-year-old Catherine Butler was arrested twice in a 3-hour span for DWI in upstate New York. In her first booking photo she is seen sporting a zombie look and in the second she’s cleaned up from the ghoulish disguise.

At 2 a.m. Saturday morning Butler was pulled over in Gates, New York after cops spotted her driving without her headlights on Buffalo Road. According to police, she was arrested for DWI and released shortly thereafter to a friend. She was sporting the Walking Dead-inspired look after attending a Halloween party. 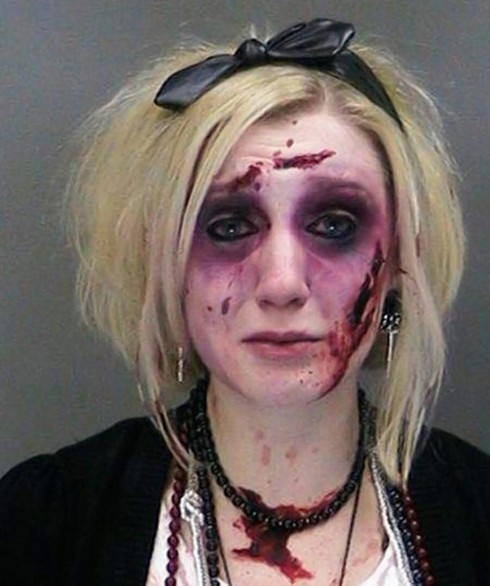 Less than 3 hours later she was spotted once again on Buffalo Road swerving erratically. She was pulled over and arrested once more for DWI.

Sadly, Butler has a long history of driving drunk as The Rochester Homepage reports she has been arrested 4 times in Monroe County for this same offense.

“If you have a loved one, who has any type of substance abuse problem, whether it’s alcohol or street drugs, cocaine, heroin, that until they get treatment for their illness, this behavior repeats itself over and over again.” 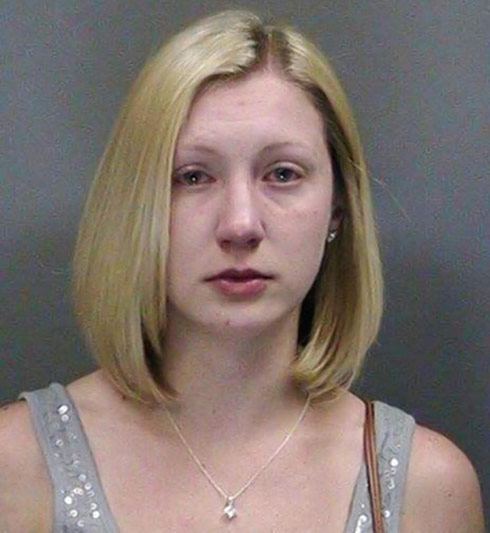 Police stated that Butler faces 2 misdemeanor charges for these two latest arrests. Her prior DWIs had been reduced to violations.

Update: Had some folks questioning if this is even real (hard to believe I know). I found an article about the event Butler was attending prior to her first arrest (The Zombie Prom at the BLU Bar & Grill) which featured a photo of her in costume with two others:

Here’s another photo of her at the event in which you can see her holding a drink:

BLU Bar & Grill has since issued a statement about the arrests:

In terms of the girl who was arrested for DWI twice after attending the zombie prom, we would like to take this moment and address the situation. The news is making national headlines, as well as all local news outlets, so we would like to make it known that while we are unable to control what people do once they leave the venue, we do everything in our power to make sure that attendees of the annual zombie prom are safe and have a good time without putting others in danger. We took all precautions to make sure that people had safe rides home, and there were resources readily available to drive if need be. The girl in question, was able to bypass those safety precautions and took it upon herself to drive. If there are any questions regarding this, you may contact us through our Facebook page. Thank you.

And just in case you still had doubts, there is this report that explains her 4 DWI arrests include the 2 from this evening.