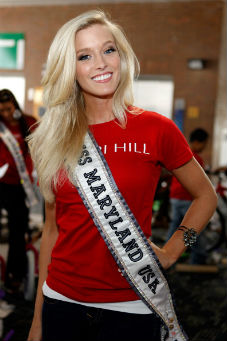 24-year-old Allyn Rose, who placed 8th overall in the 2011 Miss America pageant, and will be back representing Washington D.C. in the January 2013 pageant, has chosen to remove both of her breasts after losing her mom to breast cancer, and finding out she carries the breast cancer gene.

“My mom had her right breast removed at 27, but at 47 or 48, it came back in her left breast. It was already stage three. She could have had that other breast removed, but I’m sure there was a part of her that thought she didn’t want to give up this other part of herself.

My dad said he begged her for years and years to get it removed, but she said no. It’s ultimately the thing that killed her. I had to become my own mentor. I had to go pick out my prom dress by myself. I had to go to my high school graduation without my mom. She didn’t see me go off to college or go on my first date or drive a car for the first time.”

This story is heartbreaking, but it’s fortunate to live in a time where women can not only find out if they are predisposed to developing breast cancer, but they can do something about it. It’s courageous and inspirational for Allyn to share this story to encourage others to be proactive about their health.

Allyn says that boys who carry the gene also have an increased risk for breast cancer, but that women with the gene have a 75% change of getting the devastating disease. Along with her mother, Rose has lost many other female family members to breast cancer.

Would you get a double mastectomy if you found out you carried the gene?