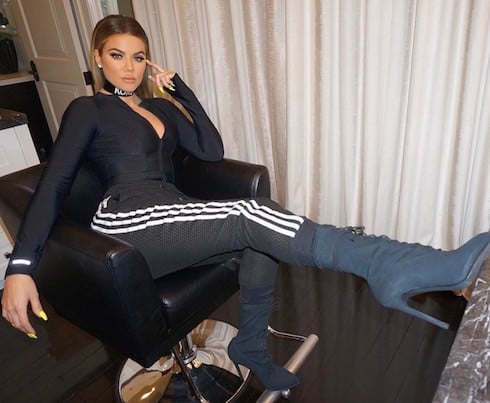 Roll your eyes if you’ve heard this one before: a member of the Kardashian family reportedly just got broken up with in part because dating a Kardashian is a dangerous, high-pressure activity akin to getting the bends by choice and in part because of the demands of the boyfriend’s day job. This time around, the pair is allegedly Khloe Kardashian and boyfriend and Cleveland Cavalier Tristan Thompson, for whom Khloe was apparently ready to move to Ohio and make lots of babies and family dinners as recently as last week.

Hollywood Life appears to be the source for the basis of the now numerous reports on the couple’s split. According to their take, Khloe and Tristan’s fights are “pretty explosive,” though their insider also points out that the two “rarely fight.” However, when they do, the topic of choice is–unsurprisingly–their future together: “It drives Khloe crazy that Tristan won’t commit[;] that’s a real bug bear for her.” And, yes, Khloe is aware that the Cavaliers are about to start the Eastern Conference semifinals against a Toronto Raptors team they could coast against if LeBron hadn’t averaged approximately 49 minutes per game for the last month of the season. But, gosh darn it, what’s more important than love, really?

(Unrelated aside: folklore props to HL’s anonymous source for dropping “bug bear” when a regular old “pain in the ass” would have worked just fine.)

But did Tristan Thompson dump Khloe? Nobody seems to know for sure, which is also par for the course with the Kardashians. But even Sports Illustrated is reporting that the two are reportedly done, and that, judging by a sampling of Twitter reactions, the overlap in the Venn diagram between Cavs fans and Kardashian fans is small indeed.

And Bossip is stoking the speculative fires by wondering aloud whether Tristan decided he was better off going back to his “bangin’ baby mama” Jordy Craig, who appears to have just returned from an Orthdox two-week Spring Break in Greece.

Game 1 of the Cavs-Raptors series is tonight at 7 EST; Tristan or no, filming for Keeping Up With The Kardashians Season 13 is ongoing.