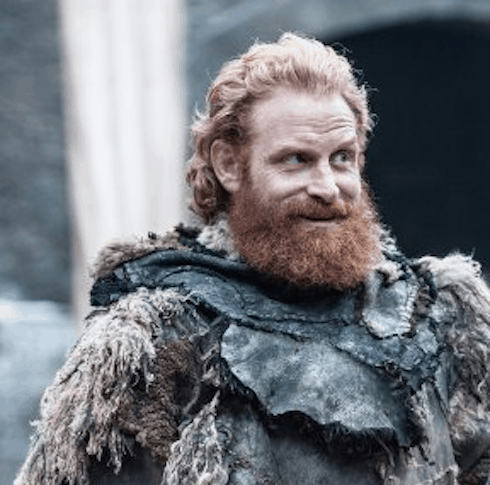 We last saw Tormund Giantsbane and Beric Dondarrion running in terror as the reanimated Viserion breached The Wall in the Game of Thrones Season 7 finale. But are Tormund and Beric dead or alive? Would GoT really kill two long-running fan favorites — one of whom we’ve already seen die and be resurrected — off-screen? Thanks to Game of Thrones director David Nutter recent reddit AMA, we think we might have an answer, and it lines up pretty neatly with a related clue from earlier this year.

First of all, in case you need a refresher, here’s that harrowing final scene:

It kind of looks like Tormund *maybe* collapses along with the breached section of The Wall and a fair number of the Night’s Watch? But it also looks like he was running like a madman and may have been beyond the collapsed section by the time it fell. It’s impossible to say, which was of course the point.

Enter David Nutter’s reddit AMA earlier this week. Nutter, who’s directed several Game of Thrones episodes throughout its run and helmed the first two episodes of the forthcoming eighth season, was as spoiler-free as you’d expect a member of the show’s crew to be. When asked to name his favorite character on the show, though, he gave an intriguingly ambiguous answer:

I can’t tell you — I love them all — with he and Cersei of course, Lena Headey who I worked with on the Sarah Connor Chronicles is a favorite of mine as well. Can’t leave out Emilia and Kit Harrington (Jon Snow) as well but the cast is fantastic there’s not one bad one in the bunch — to think of the Hound and Tormund and all those guys this last season was just magical.

If you’re looking for definitive proof that Tormund and Beric survived, you won’t find it — it’s entirely possible that Nutter was referring to the Season 7 scenes between The Hound and Tormund when he mentioned them. However, given that Season 8 has finished filming, it’s entirely possible that “this last season” refers to the final season, and that we’ve not yet seen the last of Beric or Tormund. Which means, of course, that all the Tormund and Brienne shippers can (and should) hold out hope.

As for that clue from earlier this year? It’s another small, potentially revealing detail, this time from the actual script for Season 7 finale “The Dragon and the Wolf.” As Winter is Coming pointed out, once it was nominated for an Emmy, the script became available on the Emmy Awards’ official web site. And it, too, seems to suggest that Tormund and Beric are alive:

It is indeed quite possible that neither character survived, and that we simply won’t see Tormund or Beric. It’s already happened with Ellaria Sand, so there’s nothing to say she’s the only character to get an off-screen death between Season 7 and 8. I’m going to choose to believe that Tormund and Beric are alive, if only so we can get a sequel to what may well be the funniest scene in all of Game of Thrones:

Game of Thrones Season 8 premieres in April of 2019.

(Photo credits: Are Tormund and Beric dead or alive via HBO)

How 15th century Wars of the Roses inspired Game of Thrones

George R. R. Martin loves wolves so much he’s auctioning off amazing prizes to raise money for them