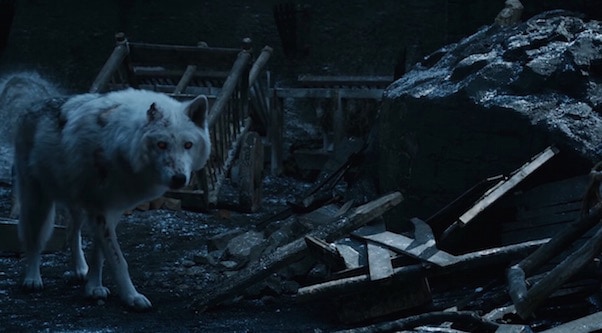 The eighth and final season of Game of Thrones has been, to put it gently, something of a shitshow. Three of the five episodes that have aired so far are among the four lowest-rated in the show’s history. Character development got sacrificed in favor of spectable. An errant craft services cup got left in a shot and served as a metaphor for the sloppy execution of the show’s last hurrah. Which is all to say that, with one episode left, there’s no single Game of Thrones finale spoiler that can fix everything to have gone wrong this year. But there is one that can maybe come close.

The maybe potentially spoiler-y stuff is about to start, followed by definite spoilers. So here’s a well-placed ad to act as buffer…

…and here’s a screengrab of Kit Harington’s extra-on-Miami Vice look during his Saturday Night Live monologue from just before the Season 8 premiere, which in hindsight seems to have been foreshadowing disaster: 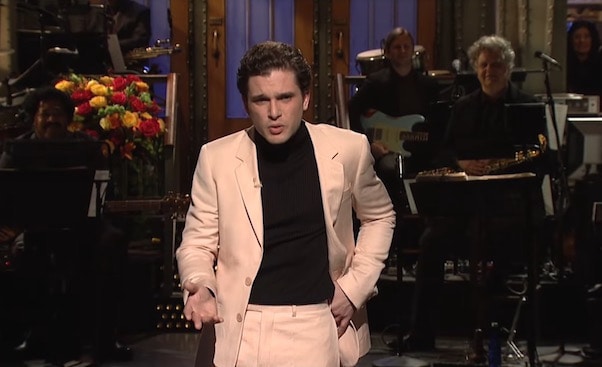 One of the most divisive things to happen on Game of Thrones this season was Jon giving up Ghost, his direwolf and lifelong companion, before heading from Winterfell to King’s Landing in episode four (“The Last of the Starks”). The divisive part was actually due to something that didn’t happen: Jon never pet Ghost goodbye. We won’t get into how awful a thing that is for just your normal, everyday good dog. Ghost has been there for Jon forever; he sat vigil and protected Jon’s body after he’d been stabbed to death by the Night’s Watch traitors and before Melisandre resurrected him; and he lost an ear fighting the Army of the Dead one episode earlier. To say that Ghost is a very good boy is to undersell the matter.

Apparently, Jon didn’t ruffle his pup’s fur one last time because Ghost, like Dany’s dragons, is almost entirely CGI, and it would have been either too complicated or too expensive a shot. Episode director David Nutter gave just about the lamest possible explanation to Huffington Post after “The Last of the Starks” aired and the outcry began:

Since the direwolves are kind of CG creations, we felt it best to keep it as simple as possible. And I think that it played out much more powerfully that way. Keeping Ghost off to the side, I thought that played out better…[Jon] just walks off by himself, he turns to Ghost and has this moment with Ghost that I thought was very, very powerful.

If by “powerful” Nutter means “like unveiling a full diaper first thing in the morning,” he is undoubtedly correct. And since we’re about to get into the truly spoiler-y Game of Thrones finale spoiler, here’s another buffer / chance for you to turn around — it’s the actual scene where Jon says goodbye to Ghost:

Last chance to turn around. The spoilers are about to get real.

The ending of Game of Thrones actually leaked weeks ago. Several different sources, each of whom leaked what turned out to be accurate synopses and details about the first four episodes of Season 8, have all spilled the tea on what happened in episodes five and six. Five was last week’s “The Bells,” and since literally 99% of the leaks turned out to be correct, it’s safe to say that the plot for the final episode is already out there for anyone to see. (We’re only going to get into one Game of Thrones finale spoiler, but if you really want to know everything, click here.)

According to the Reddit thread dedicated to collecting and verifying the spoilers and leakers, one particular user who was right about how Cleganebowl turned out last week has shared more info on this week’s episode. The user claims that, among many other things, “Jon…reunites with Tormund and Ghost” and unidentified Wildlings, and the whole group heads north together. And it sounds like the powers that be decided they had room in the CGI budget for one more direwolf snuggle after all:

“Did I forget to mention the most important detail about this entire episode? Our good boy gets a pat from Jon.”

Given how uneven and downright strange this entire season has felt, we’ll believe it when we see it. That said: hopefully we see this. You can keep your Iron Throne; you can have the rubble that is King’s Landing and all the scarred earth between it and the ruins of the Wall. It’s nothing if you don’t do right by your dog.

Game of Thrones‘ final episode airs this Sunday night at 9 on HBO.