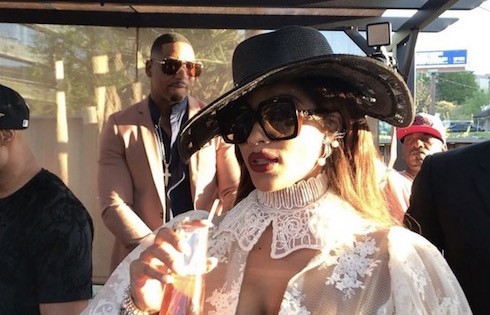 It’s always in the best interests of LHHATL’s producers to make viewers think that Joseline and Stevie are back together again. And, now that Joseline has a brand-new song and music video to promote–to say nothing of “Special Delivery,” her upcoming pregnancy special featuring the first footage of baby Bonnie Bella–it’s in Joseline’s best interest, as well.

Of course, she knows how to play the game: she’s not out there draping herself all over Stevie, who she once accused of molesting his own daughter in order to try and gain the upper hand in a paternity fight. Instead, Joseline recently took to Instagram to share, with a wink and a nudge, a few new photos taken of herself and Stevie at their first public appearance together in some time:

Any bitch that works for him works for me! #lahhatl

Of course, that appearance also came with a “Baby #2” tease:

When your baby daddy is asking you to have a Lil boy ???

Joseline’s glass of rosé is a nice touch. It’s there to remind everybody that she may have been pregnant before–but she’s definitely not now 😉

It looked like Joseline and Stevie were getting back together back in December, when he acknowledged that he is in fact Bella’s father. But that brief moment of happiness ended when Joseline delivered an “ass-beating” to Stevie, and he called her “mentally unstable” in court documents.

However: as we said at the top of the article, Joseline’s got product to push–and it just so happens to involve Stevie, too. He produced her track “Baby Daddy,” the official video for which is forthcoming. Here’s the song itself:

Love & Hip Hop Atlanta Season 6 continues Monday nights at 8. “Special Delivery” is due on May 1st.

(Photo credits: Joseline and Stevie are back together again via Instagram)