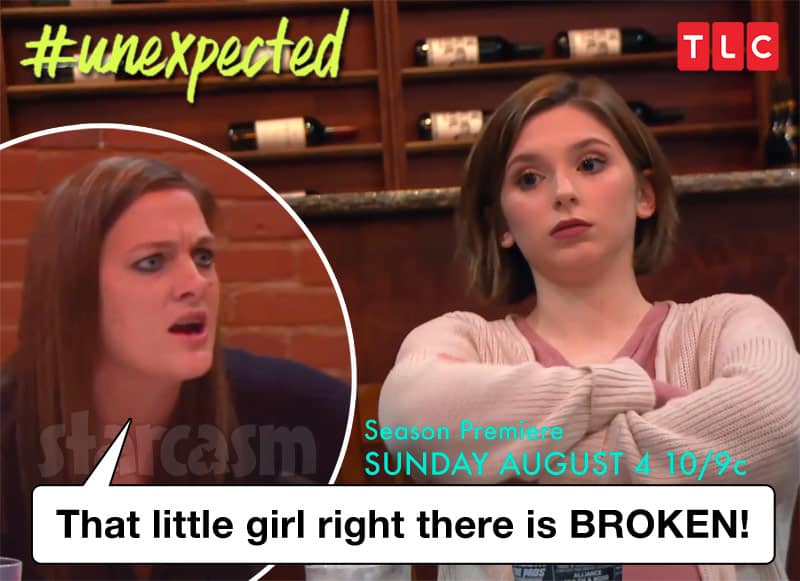 TLC has just released the preview trailer and premiere date for Unexpected Season 3, including four new moms — and only two returning moms!

We previously reported that Emiley Noack and Laura Barron would not be returning this season, but we were completely unaware that show OG Lexus Scheller, daughter Scarlett, and Scarlett’s dad Shayden Massey would not be back when the show returns on August 4!

The two moms that are back for Season 3 are McKayla Adkins (Season 1 and 2) and Chloe Mendoza (Season 2). Bringing those two back had to be a no brainer for producers as pregnant McKayla prepares to give birth to her second child with Caelan Morrison after the couple finally called it quits for good. Meanwhile, Chloe is still standing by her man Max Schenzel, even though he has a jail sentence looming and has been in rehab after testing positive more than once for Fentanyl use.

Six couples may sound like a lot to pack into an hour-long show, but two of the new moms featured are actually sisters — Tyra and Tiarra.

Here’s the scoop from the TLC press release:

Returning this season are McKayla (18) and Caelan (20) who are expecting their second child, and Chloe (17) and Max (19), who are adjusting to their new life as first-time parents while simultaneously trying to maintain their relationship, despite Chloe’s parents’ disapproval. Viewers will also be introduced to four new couples who are trying to navigate the ups and downs of teenage pregnancy and parenthood, including Hailey (16) and Matthew (16), Rilah (16) and Anthony (18), and Tyra (18) and Alex (18), in addition to Tyra’s younger sister Tiarra (16) who recently birthed her first child with her boyfriend Dee (18).

In the season three premiere, viewers find McKayla and Caelan at a crossroads in their relationship, and McKayla is ready to self-induce labor on her second child. Meanwhile, Chloe is essentially parenting Ava as a single mom while also attempting to maintain distance between her parents and her boyfriend Max, who may be facing jail time. Also, just days after her younger sister Tiarra gave birth to a baby girl, Tyra finds out that she is five months pregnant, and she is concerned about the health of her baby. And, much to Hailey’s dismay, Matthew has yet to introduce her to his sister, who has serious doubts about Matthew’s readiness to become a father.

As these teens transition from proms, to baby showers, to delivery rooms, their families stick by their side every step of the way, while helping to guide them from heartbreak and helplessness, to hope.

TLC is partnering with Power to Decide, the campaign to prevent unplanned pregnancy, to help viewers use Unexpected as a way to spark meaningful conversations about unplanned pregnancies. There have been historic declines in teen pregnancy and meaningful declines in unplanned pregnancy over the past two decades, according to Power to Decide. However, progress doesn’t mean victory: nearly one in four girls will get pregnant by age 20, and children of teen moms are more likely to become teen parents themselves. Based on themes covered in the show, Power to Decide is creating discussion-starters, information and tips for young people and their parents, mentors and allies to jump-start open conversations and ensure all young people have the power to decide if, when and under what circumstances to get pregnant and have a child. These resources will be available for viewers at TLCme.com/FamilyResources.

In addition to the regular Unexpected series, TLC will also be bringing back their digital series Unexpected: Baby Bumps. “The original digital series will be available on TLC GO July 28. This five-episode digital series catches up with the returning moms and introduces three new expectant teens and their families.”

UPDATE – We have detailed information on Rilah, Tyra, and Tiarra! Just click the link for full names, bios, baby names and birthday, info on the dads, photos, and social media links!

Unexpected Season 3 premieres on Sunday, August 4 at 10/9c on TLC. Stay tuned because we will be following up this post with more detailed information about all of the new couples!

TLC UNEXPECTED Did Chloe and Max break up?!