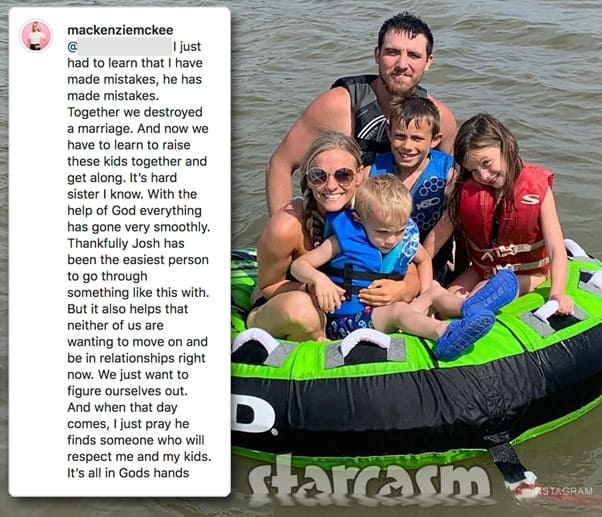 “A day in papa’s boat out on the water,” Mackenzie captioned the gallery. “Today I am fried,” she added, along with the hash tags #kidscomefirst and #healthycoparenting.

A day in papas boat out on the water. Today I am fried. #kidscomefirst #healthycoparenting

The caption doesn’t go into much detail about Mackenzie and Josh’s coparenting relationship, but she reveals more in her interactions with a commenter on the post:

COMMENT: Does the coparenting comment mean you are separated again? My husband left in January 2020 after falling out of love for me and then immediately “fell in love” with someone else and has been with her ever since. I have a really hard time coparenting with him because I’m hurt and angry still, and then if I start to forgive him too much I find myself hurting because I miss him and what we had. How do you find your balance so well and focus on yourself and the kids? You seem to be thriving so well.

MACKENZIE: I just had to learn that I have made mistakes, he has made mistakes. Together we destroyed a marriage. And now we have to learn to raise these kids together and get along. It’s hard sister I know. With the help of God everything has gone very smoothly. Thankfully Josh has been the easiest person to go through something like this with. But it also helps that neither of us are wanting to move on and be in relationships right now. We just want to figure ourselves out. And when that day comes, I just pray he finds someone who will respect me and my kids. It’s all in God’s hands.

The photos combined with Mackenzie actually saying something nice about Josh had some people openly speculating that the couple had reconciled yet again. Mackenzie was quick to shut that down.

COMMENT: Nah. You are together again. Which is sad because you’re just showing your kids that everything he did to you is okay. 🙁

MACKENZIE: Did you read the hashtags?

MACKENZIE: If you can’t support me unfollow me. I can remove him from being my husband but have no reason to remove him from his children. It’s people like you that make me not want to share my life anymote [sic].

Meanwhile, over on Twitter, Mackenzie revealed that Josh and her dad are “best friends.” That resulted in this interaction:

Josh and I destroyed this marriage together and I think my parents saw both sides and decided to love both. Josh and I are healthily coparenting and getting along great. Leave it at that and move along 💗✌🏼

In another response to a tweet from a private account, Mackenzie clarifies that she was the one who left Josh and not the other way around. She adds: “I think it’s safe to say we’ve been equally wrong to one another. He shouldn’t have put up with me and I shouldn’t have him. I promise I’m a big girl and am making the right decisions for our babies. God bless.”

As you might imagine, Josh was not very pleased about being called out for marital infidelity publicly by his wife, who has more than a million followers on social media. Although Josh didn’t go into specific detail like Mackenzie did, he was very clear about how he felt.

“Better worry about your own sins, cause God ain’t gonna ask you about mine,” Josh shared in a text graphic on Instagram last week. He expressed his frustration further, as well as his sense of humor about the whole thing, in the comments:

People, I’ve been through the ringer being on that damn show, this is nothing new to me. I get it you all are p*ssed at the fact of what you read on the internet or seen on TV. “Ok”? But if you are going to come at me with what little you all really know, know your damn facts! And know that this is not a one sided ball game 😉

Mackenzie and Josh have quite the history of dramatic break ups, some of which were later revealed to have been publicity stunts. That fact, plus Mackenzie’s relatively recent addition to Teen Mom OG, have some fans openly wondering about how legitimate the couple’s current split is. Are we going to see another magical heal-all scavenger hunt and vow renewal ceremony next season?

I’ve been following Mackenzie and Josh since before they actually made their MTV debut on 16 and Pregnant, and I have to admit that I can’t tell.

#TeenMomOG Mackenzie McKee recently described the relationship between her husband Josh & her cousin Ashley's as "obviously another affair." She's now walking back the affair claim: "I never used the word cheating or banging." #TeenMom https://t.co/xDfKnAZtzM pic.twitter.com/khdSIB5aWc

Regardless of Mackenzie’s willingness to manufacture a little drama for headlines (like her meeting with Vivid to discuss her sex tape that apparently didn’t actually exist), I believe she takes legal marriage and divorce seriously. I checked court records, and so far, neither she nor Josh have filed for divorce.