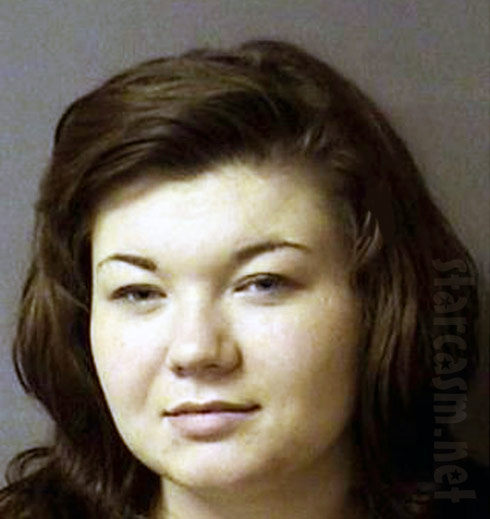 Teen Mom Amber Portwood was re-sentenced to 5 years in prison after she failed to complete her drug court program as mandated by her initial plea agreement. She, in fact, requested to go to jail and in spite of her attorney’s request for leniency the judge handed out the full 5 years minus time served.

Additional information has come to light from yesterday’s court appearance including the troubled reality star citing her participation in 16 & Pregnant and Teen Mom as the primary reason for her drug addictions. She also recanted from her previous proclamation that she would, “never be sober.”

According to area newspaper, The Herald Bulletin, Judge Happe directly asked Amber if she still felt that she would never be sober and she answered, “no.” When her attorney Evan Broderick asked for leniency he called Amber a “unique case” and added:

“Many of the drug court participants have long histories of being in and out of jail. Amber has only been convicted of two felonies.”

The judge stood firm explaining that he was bound by the previous agreement.

Portwood stated that she first started using drugs when she was 12 or 13 and that the intense exposure of Teen Mom presented increased temptations. Broderick went a step further when he told the court that before the show started (no indication as to whether he was referring to 16&P or TM) Amber was flown out to California to meet with producers. Drugs were readily available at this time as Portwood and other members of the show attended multiple parties together.

The longest Portwood remained clean was for two and a half months during the court-mandated program. She started abusing again when she underwent surgery to have gallstones removed and was prescribed hyrdrocodone, the drug she had already been addicted to.

She was previously ordered by the court to start a college fund for daughter Leah and Happe was grateful for at least that much:

“If there’s one good thing to come out of this, now your daughter has money set aside and a door open to her that wouldn’t have been otherwise. So thank you for doing that.”

Amber’s official statement via her attorney was that she was prepared to go to prison and do her time.