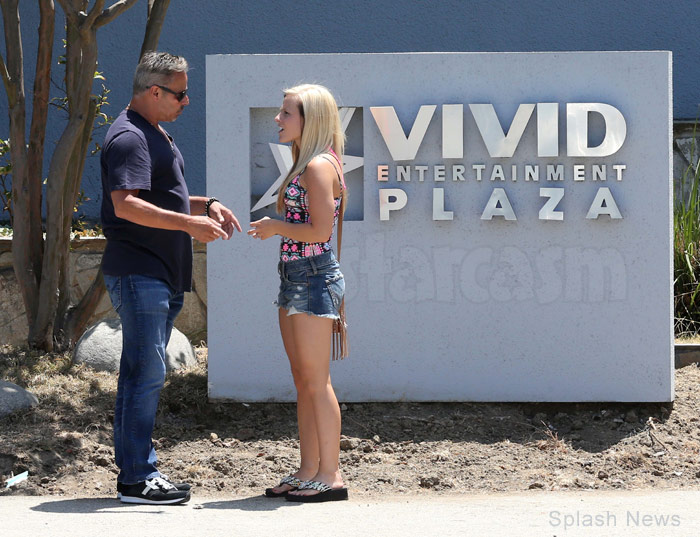 Mackenzie McKee reportedly met with Vivid Entertainment yesterday to discuss the fate of her sex tape, and now we have the proof: Mackenzie and Vivid founder and co-chairman Steve Hirsch were photographed talking together outside of Vivid’s LA offices. 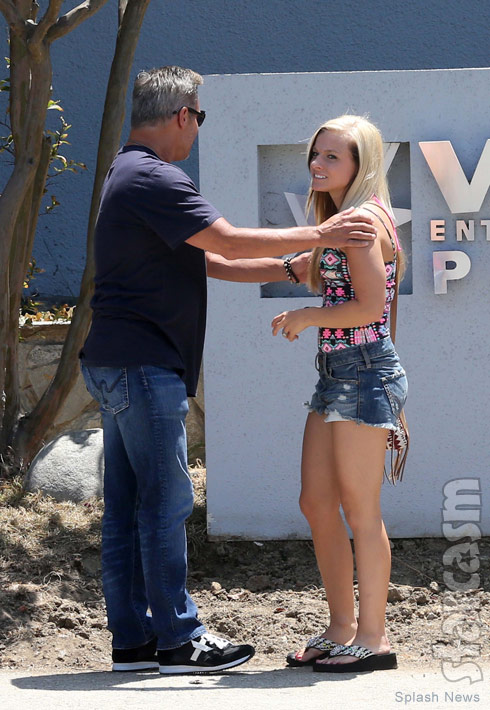 Yes, of course the whole thing looks like (and probably is) a staged photo op. Why else would they need to walk outside of the Vivid offices and have a discussion in front of the Vivid Entertainment sign while a photographer snapped away? Oh, and in case you missed it, Mackenzie also posed for another photo op yesterday, but this time she was wearing a bikini at the beach. (Click the link for photos.)

The latest in the Mackenzie McKee sex tape drama is that her husband and reported sex tape partner Josh McKee has left her…because he thinks Mackenzie is in Los Angeles to make an adult film. From Fishwrapper:

We spoke to Mackenzie’s rep, who vehemently denies that her client is filming anything out in Los Angeles, and is there solely focused on trying to prevent Vivid from releasing and distributing her personal footage.

The report seems to jibe with Mackenzie’s tweet from Tuesday, which we shared in a previous post before we knew about the Fishwrapper report:

In that same post we shared Mackenzie’s statements on her racy video, which included the following: “I’m not going to change my morals. I’m not like that. I will never do p0rn and I never have.”

UPDATE – It seems that all the stress is really getting to Mackenzie:

Blacking out from too much anxiety… Should I see a doctor?

We’ve always been big fans of Mackenzie and thought of her as a big-hearted young woman, and I just don’t think this “no such thing as bad publicity” game is for her. Hopefully she can find some way to pull the string and bail out.

Josh Duggar withdraws from lawsuit over release of molestation documents