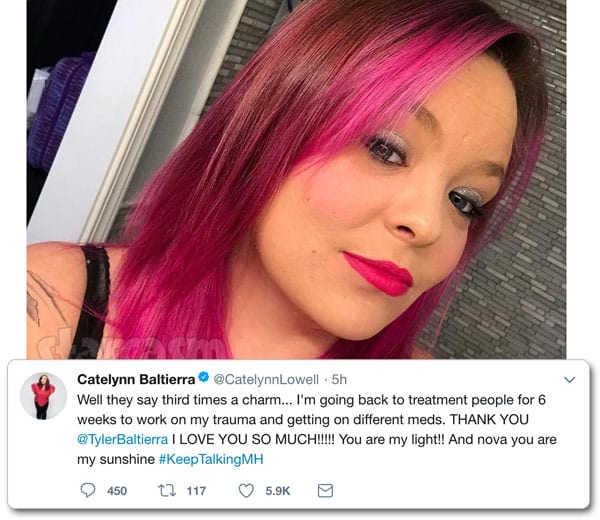 Less than a month after a six-week stint in rehab, Teen Mom OG star Catelynn Baltierra is headed back for six more weeks of rehabilitation.

“Well they say third times a charm…” Catelynn began her announcement, which she posted on all of her social media accounts. “I’m going back to treatment people for 6 weeks to work on my trauma and getting on different meds.”

Catelynn then expressed her gratitude for husband Tyler’s continued support: “THANK YOU @TylerBaltierra I LOVE YOU SO MUCH!!!!! You are my light!! And nova you are my sunshine #KeepTalkingMH”

The announcement was certainly less startling than her previous one from November of 2017. “Well today I thought of every way to kill myself…so I’m going to treatment,” Catelynn tweeted, before heading off to a rehab facility in Arizona for six weeks.

Prior to her most recent stay, Catelynn spent time in rehab for anxiety and depression in March of 2016.

One Twitter follower was concerned by Catelynn referencing “trauma” in her announcement. “Trauma? Carly? Or did Butch or someone else do something to her?” the follower asked Catelynn. “I’d be concerned about that girl hanging around.”

Another follower tweeted “Something is going on here,” to which Catelynn responded, “Yeah my childhood sh!t that’s what’s going on.”

Catelynn also responded to a tweet by her co-star, and fellow depression sufferer, Amber Portwood: 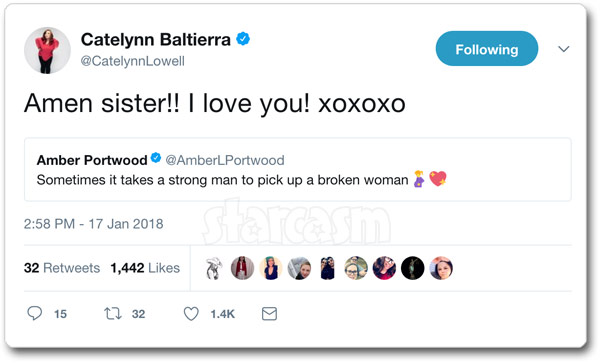 That Amber tweet was part of her recent Twitter meltdown and came just before she referenced Catelynn seeking help for her depression: 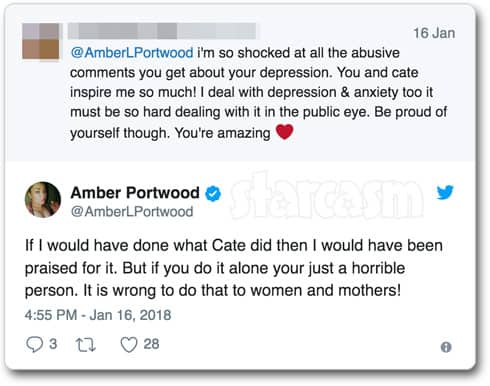 Catelynn’s struggles with depression and anxiety have been featured prominently on the show over the last few seasons. MTV actually promoted this week’s episode with a video clip of Catelynn talking about her post-postpartum depression along with the slogan “It’s OK to not be OK:”

"It's ok to not be ok." —@CatelynnLowell ❤️ Catch more OG strong moments every Monday on #TeenMomOG! pic.twitter.com/NHDg4AsFI8

Catelynn’s husband Tyler shared the promo clip and offered up his support and admiration for Catelynn:

I am SO PROUD of this woman! When you have been fighting your whole life to survive…it doesn’t just make you a survivor…it makes you a damn WARRIOR! I love you babe @CatelynnLowell ? https://t.co/f59lVcYY6y

We wish Catelynn all the best and certainly hope that she is able to get the help she needs to return home and be able to find joy in the amazing life and people waiting for her there.