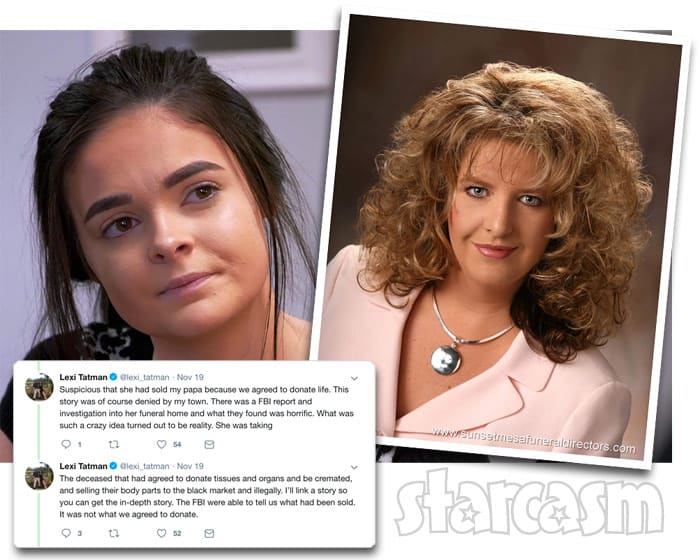 Teen Mom: Young and Pregnant star Lexi Tatman has been very open about her desire to become a funeral director, and on the current season she was even seen visiting a funeral home looking for a job. Unfortunately, one of the people who inspired Lexi to want to pursue a mortuary career recently took advantage of Lexi and her family — and numerous others — with her organ and tissue harvesting business that also included a crematorium that allegedly sent families fake bags of cremains.

Lexi shared details about her family’s connection to the headline-grabbing FBI case in a series of tweets after initially posting: “Karma never disappoints. You’ll get what’s coming to you.”

As you might imagine, that vague comment had many fans questioning what Lexi was referring to — but I don’t think anyone could have guessed the correct answer. From Lexi:

I’m not sure how many of you were curious about who I was talking about. I’ve waited till I’ve gotten all the details to share a very personal, sensitive subject. I’m sure many of you are unaware what has been going on here in my town. It has to do with a local funeral director.

This local funeral director has handled 3 of my family members. She hosted my baby shower as well. She also had a influence on my future as a funeral director. A few months ago there was a story of her by [Reuters]. They claimed she sold “donated” body parts illegally. We were suspicious that she had sold my papa because we agreed to donate life. This story was of course denied by my town. There was a FBI report and investigation into her funeral home and what they found was horrific. What was such a crazy idea turned out to be reality.

She was taking the deceased that had agreed to donate tissues and organs and be cremated, and selling their body parts to the black market and illegally. I’ll link a story so you can get the in-depth story. The FBI were able to tell us what had been sold. It was not what we agreed to donate.

We were outraged and almost certain we didn’t have our grandpa’s cremated remains. @ColoradoMesaU students had offered to test the remains for the victims of the funeral directors disgusting actions. I had been waiting to write about this till we knew what we had.

Sadly this is a common thing across the US. If you’re a victim to something like this I’m so sorry. And if we are holding one of your loved ones in our house, I can promise you they are safe, loved and taken care of.

Lexi conversed with some of her followers, who were obviously shocked by what she revealed:

TWEET: I don’t even know what to say. That’s horrifying and I’m so sorry.

LEXI: It is absolutely disgusting. I’m thankful we more than likely have my grandfather but I have friends who’s parents, and family who do not. Who ever is in our urn, they are loved and safe.

TWEET: Don’t let her ruin your dreams, this proves how much this field needs you. I’m sorry about your poppa

LEXI: She is never going to ruin my dreams of being a funeral director. She’s pushing me to be a better one than her.

TWEET: What exactly do they do with these parts?

LEXI: She sold them to multiple businesses worldwide. What they chose to do with them is beyond me. Some were sold to schools, others were in the black market.

LEXI: I think they’re working on it. 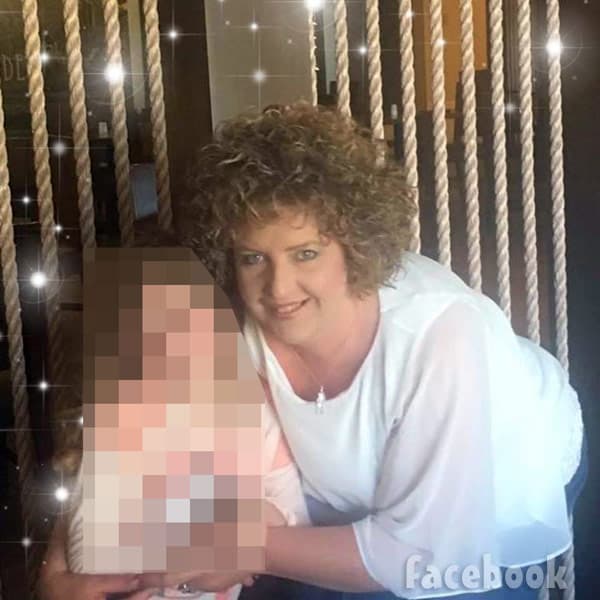 I did some extensive research looking into Megan Hess’s funeral home, crematorium, and organ and tissue donation businesses in Montrose, Colorado, and the results were startling. As far as the most recent comprehensive update, Megan (above) is facing a lawsuit by a former client with a trial set for spring of next year.

In August, facing numerous allegations by fellow clients that included cremated remains actually being concrete, embalming without permission and losing bodies, Megan signed documents forfeiting her licenses to run a funeral home or crematorium in the state of Colorado ever again.

Megan has yet to be charged with any criminal counts, but the FBI’s investigation has yet to conclude. “The FBI has been mum on exactly what its ongoing investigation involves,” The Daily Sentinel reported last month, “though families have said they’ve submitted cremains for testing and the agency has taken numerous samples to its own laboratories for evidence in a possible criminal case.”

Here is a local news report that includes interviews with some of the family members victimized by the scandal:

Prior to her issues with Sunset Mesa Funeral Directors and Donor Services, which was the only instance of a funeral home, crematory and body broker operating at the same location and under the same ownership in the United States, Megan Hess received scrutiny for her role as manager of Montrose Valley Funeral Home.

Montrose Valley Funeral Home made headlines in 2016 when a new owner discovered the cremated remains of 175 people in the basement.

From Colorado Public Radio in August of 2016:

Matthew Boyle bought a Montrose funeral home last fall and made a ghastly discovery in the basement. The cremated remains of 175 people, babies to veterans, had been abandoned in pickle jars, trash bags, moldering boxes and expensive urns. Some had identification and death dates that went back to 1947. Some had no names or bore a question mark. Some included instructions specifying that the remains were supposed to have been scattered or buried.

In one case, remains had been switched with suspected kitty litter.

Most of the remains were reportedly from before Megan’s tenure there, but “approximately one-third of the cremains in the basement” were placed there after Frank and Debbie Tucker purchased the business in 1987 — which is a very high number considering that the funeral home has been around since the 1940s.

Debbie spoke with The Daily Sentinel about the controversy in May of 2016:

[Debbie] doesn’t dispute the fact that cremains accumulated in the basement during the time she owned the place with Frank and he trusted another person to run the business for him — a woman who now operates a funeral home in Montrose.

…In 2002, Frank hired Megan Hess, who managed the funeral home as he dealt with health problems.

“She was running it more and more as he got sicker and sicker,” Debbie said. “She was the lynchpin.”

Debbie said Megan’s duties as manager included arranging funerals, handling families, and making sure the services were carried out.

… “The person who has the answer to all this is the person who handled the arrangements,” said Debbie, noting that she never trusted Hess, but that she regrets her late husband’s decision to trust Hess with their business.

“I don’t know how Megan operated except for the fallout I dealt with after she was gone,” Debbie said, declining to elaborate.

The Daily Sentinel then hinted at the trouble on the horizon for Megan Hess and her new businesses:

The Office of Funeral Home and Crematory Registration has received three complaints concerning Sunset Mesa Funeral Directors that are currently under investigation and not available for review, according to Department of Regulatory Agencies spokeswoman Cory Everett.

A complaint filed against Colorado Cremation last year with the state, obtained by The Daily Sentinel through a Colorado Open Records Act request, gave a detailed report of a family’s difficulty obtaining cremains from Hess’ business.

In the same year as the two articles above, Reuters did an extensive exposé on “body brokers,” which included an interview with Megan Hess. One of the topics brought up during the interview was Megan’s claim on her website that she possessed a “Doctorate in Mortuary Science.” As Reuters points out, “no such degree exists in the United States for morticians, veteran funeral directors say.” Soon after the interview, Megan updated her website to remove the degree reference.

Here is a snapshot of Megan’s bio from her website prior to the change: 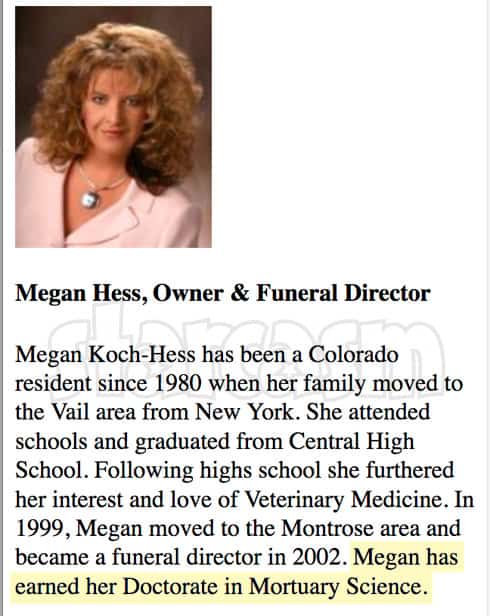 Reuters later followed up by focusing on Megan Hess and her business as part of their series titled “The Body Trade,” in which they interviewed six people who used to work for Megan. Those interviews sparked an FBI investigation in late 2017, and Reuters shared some of the information provided to them and the FBI by the former employees in an article posted in January of 2018.

One former employee recalled being shown a collection of gold teeth taken from dead bodies and collected by Megan’s mother Shirley Koch, who worked at the facility. The employee recalls Shirley stating that “she had sold a different batch a year prior, and they took the whole family to Disneyland in California on the gold that they cashed in.”

Unfortunately, none of the employees interviewed worked for the Donor Services portion of Megan’s business, as all of them worked for her funeral business. “She mentioned on several occasions about how much money she would be getting per month, which blew my mind,” said Jennifer Henderson, a former floral designer for Sunset Mesa. “She said that one month she got about $40,000” from selling donated bodies.

Most brokers who sell body parts offer to cremate part of the donor’s body for free. Hess, however, charged families to donate their bodies – $195, plus $300 more if relatives want cremated remains returned. The charges defray the cost of picking up the deceased, she said in the 2016 interview.

There is even more money to be made in dissecting those bodies and selling the parts. A price quote Hess sent to an Arizona medical training lab in 2016 offered torsos for $1,000 each. A pelvis with upper legs went for $1,200, heads for $500, a knee for $250, and a foot for $125, according to a 2013 Donor Services price list reviewed by Reuters.

Last month, one of Hess’s victims organized a gathering of other victims in Confluence Park, in Delta, Colorado to share their stories about what happened, as well as the information they had each received from the FBI. Here are some excerpts of what the families were told of their deceased loved ones by the FBI as compiled by Telluride Daily Planet:

“Dolores’ head and torso were sold. … It is unknown who bought her limbs.”

“His head, hands, wrist, feet and ankles were all sold. I don’t know if the ashes I got were his. I have a feeling they weren’t him.”

“My dad’s body was sold. We’ve since found pictures of him online.”

More from the article:

“[Megan’s] out there, living her life,” someone said. “She’s fine. She’s selling hotdogs at the Montrose County Fair.” She’s tending businesses, culinary endeavors, it seems, purveying a new spice blend, confections from Truffles & Company (one flavor is reportedly “Death By Chocolate”), all-beef hot dogs through a mobile hot dog cart called PF Franks (“a play on P.F. Changs”), and samplings of wine and cheesecake at an event in her home.

As I mentioned above, Megan is not facing any criminal charges stemming from the recent allegations surrounding her funeral home, crematorium, and body harvesting businesses. She was in court recently, however, on a separate criminal charge.

In July, Megan Hess pleaded guilty to a lesser count of Improper Backing after initially being charged with reckless driving and reckless endangerment stemming from an incident in which she allegedly chased people off of funeral home property earlier in the year. “Police say Hess chased them through traffic, cornered them and bumped one of them with her car,” reported NBC 11 News.

TEEN MOM Lexi defends getting back with Kyler, responds to criticism about how he looks on the show