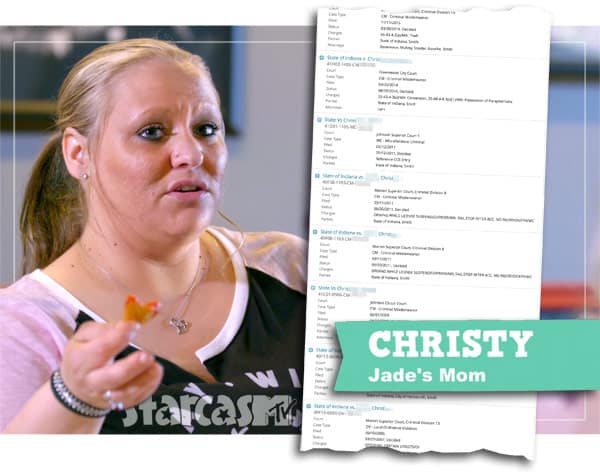 In the first two episodes of Teen Mom Young and Pregnant, mom-to-be Jade Cline’s main story line has been her concerns over her mother’s history of drug abuse and run-ins with the law. Jade talks about growing up with her mom in and out of jail, and she openly wonders whether or not she can trust grandma-to-be Christy with her daughter Kloie after she is born.

In this week’s episode, Christy is asked to take a drug test, and she passes. Even so, Jade still has concerns — and those concerns seem to be well founded.

We did some research and uncovered some of Christy’s criminal past, and it is not exactly the kind of resume anyone is looking for as far as a nanny goes. There are numerous civil suites (such as a hotel suing Christy and her husband just last year for eviction and damages), but I thought I would just focus in on those charges stemming from alleged criminal activity. Here is a rough timeline that I was able to put together from the last ten years:

July 2009 – Christy fails to appear at her hearing, a warrant issued for her arrest.

September 2009 – Christy is picked up and bonds out again.

April 2010 – Christy fails to appear at another court hearing, another warrant is issued for her arrest.

March 2011 – Christy is charged with driving on a suspended license and failure to stop after an accident.

March 2011 – Christy’s probation is revoked from her OWI arrest and a warrant is issued for her arrest.

June 2011 – Christy pleads guilty to leaving the scene of an accident, but the driving on a suspended license charge is dropped

March 2014 – Christy is arrested at a Meijer store in Greenwood, Indiana after a loss prevention officer observed Smith “selecting items from the store, specifically two items of clothing valued at $15.50 and removed their tags.” She is charged with conversion and possession of drug paraphernalia. From Radar:

“Smith’s behavior was erratic and eyes glazed,” the arrest affidavit read. “Security searched her for their protection and hers, and found a glass pipe in her purse, along with a plastic bag with rock cocaine inside of it, which was also found inside of her purse.”

A spot test on the narcotics was positive for cocaine.

“Ms. Smith admitted she bought the crack cocaine and had done some before entering the store,” the court papers read.

August 2014 – Christy pleads guilty to conversion, which is defined as knowingly or intentionally exerting unauthorized control over property of another person. The drug paraphernalia possession charge is dismissed. She is sentenced to 365 days, 361 days suspended with 4 days credit, and 365 days probation. She is also ordered to take a substance abuse evaluation.

September 2014 – Petition to revoke Christy’s probation and a request for warrant is filed.

January 2015 – Christy’s probation is partially revoked. She is ordered to serve “204 days class one time at the JCLEF with credit for 102 actual days served.” Probation is extended for 365 days with substance abuse evaluation, continued IOP and one UDS per week for four months. 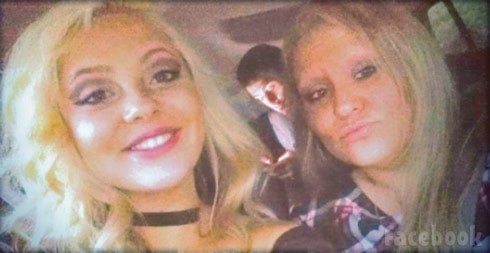 November 2105 – Christy arrested for theft. I assume that this is from an incident at a Walmart store because the day after her arrest, a stay away order is granted ordering Christy to “stay away from all Walmart property located in Marion County Indiana” for 361 days.

January 2016 – Christy’s probation is fully revoked. She is ordered to serve “270 days class one time at the JCLEF with credit for 125 actual days served.”

March 2016 – Christy pleads guilty to theft. She is sentenced to 32 hours of community service.

Though it is not crime-related, I also ran across what appears to be a divorce filing between Christy and husband Michael. From a December, 2011 entry in Johnson County court: “Comes now the Court and issues Decree of Dissolution of Marriage, Marital Property Settlement Agreement, same granted per signed order.”

I should point out that I was not able to find any charges filed against Christy after 2015. That being said, I think the timeline above is more than enough evidence to support Jade’s concerns. I am thankful that I am unable to imagine what it was like growing up in a situation where your parent(s) is constantly in and out of jail — not to mention all of the things that Christy didn’t get arrested for.

Meanwhile, Christy has responded to how she is being presented on the show in a Facebook post” “They make me look like I’m not a good mom and I am,” Christy wrote after this week’s episode. “Despite mistakes I have made since I’m not perfect… people always have sh*t to say but I say haters are [fans] too so hate me or love me doesn’t matter.”

More from the comments section:

COMMENTER: Well no one is perfect, everyone at least makes 1 mistake in their life.

CHRISTY: Yea but people are so quick to judge. I say clean ur own backyard before u jump in

COMMENTER: Yes i agree a lot of people are quick to judge. Just ignore them.

CHRISTY: Yea I quit reading the sh*t cause I’m ready to go right and I don’t want to stoop to their level

To find out if Christy is able to gain Jade and Sean’s trust when Kloie arrives, be sure to tune in for new episodes of Teen Mom Young and Pregnant airing Monday nights at 10/9c on MTV.