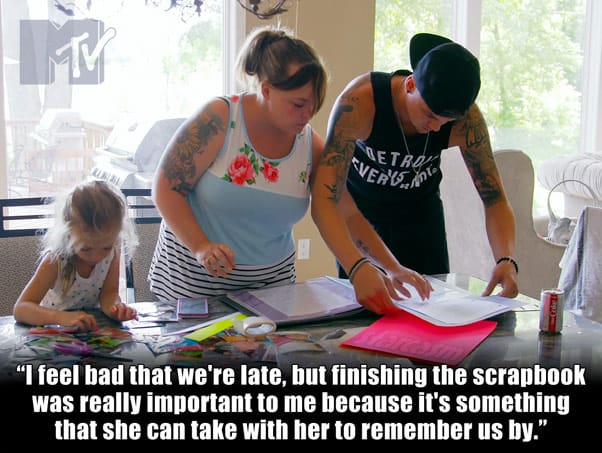 On the season finale of Teen Mom OG, Catelynn and Tyler Baltierra had their ten-year visit with their daughter Carly, who they placed for adoption with parents Brandon and Teresa during their episode of 16 & Pregnant. MTV cameras were not allowed to capture the moment, but the reunion still packed an emotional wallop for Teen Mom OG viewers. However, fans’ reactions to the episode were not all positive as many lashed out at Catelynn and Tyler for being late to their meeting with Carly so that they could finish a scrapbook.

In case you missed the episode, Tyler and Catelynn were scheduled to meet Brandon, Teresa, and Carly at a zoo near Detroit for their last visit of the trip. (Brandon and Teresa are from North Carolina, and Tyler and Catelynn live a couple hours from Detroit.) Adoption counselor Dawn called Catelynn at their rental house to make sure the visit was going to happen as planned, and Catelynn informed her that she was working on finishing up the scrapbook.

(Playing haters’ advocate, I should point out that the scrapbook looked to be mostly older photos, and could have been mostly completed well before they made the trip to Detroit.)

DAWN: I was going to say, maybe you could go with what you have and send some later, you know, to add to it.

CATELYNN: Oh no. Oh no. I’m getting it done right now.

DAWN: OK. Are you getting close?

DAWN: OK. I just don’t want you to miss out on your time with her. I know it’s so short, and I don’t want Carly to be disappointed. I know when I show up she’s going to be looking around my shoulder to see where you are.

CATELYNN: I know. If she gets sad about it, say, “Well, they had to finish making something for you — a special gift or something — and then they’re coming.”

DAWN: I’ll let them know. OK. So you guys can be there by noon, you think?

TYLER: [After Dawn hangs up.] What do you know? What’s new? Do we ever finish anything on time? Do we ever do anything we say we’re gonna do? No, we don’t.

We later see Catelynn and Tyler leaving the house at 12:20. It’s unclear how far they were from the zoo, and there have been conflicting reports as to how late they were.

“Yes, we were late to our visit with Carly. But you should have seen the amount of joy she had when she saw that scrapbook & our handwritten letters!” Tyler tweeted just after the scenes aired. “Adopted kids treasure handwritten words & pics from their birth parents & it was very special to her! So glad we did it in person!”

Yes, we were late to our visit with Carly. But you should have seen the amount of joy she had when she saw that scrapbook & our handwritten letters! Adopted kids treasure handwritten words & pics from their birth parents & it was very special to her! So glad we did it in person!

“We were a half hour late putting finishing touches on her very special scrapbook with our handwritten letters,” Tyler explained. “If this makes us horrible people, then so be it. It was SO worth it to see the look on her face in person & guarantee that she actually gets it! The visit was amazing!❤️”

Catelynn also took to Twitter to defend their decision. “Yep we were late! By like 30-45 mins and it was because I finished her scrapbook!” she tweeted earlier today. “Which by the way she LOVED!!!! She wasn’t upset about us being late she was so excited about her scrapbook ❤️.”

“Also, besides the scrapbook, what if traffic made them late?” another Twitter user suggested. “Like this is a normal thing to happen.”

“OH, now if it was traffic, it would be a TOTALLY different story wouldn’t it!?” Tyler responded. “But it wasn’t, we were handcrafting a gift. So I get it, we’re a pair of COMPLETE unworthy a**holes for it. I’ll make sure to duplicate that on my list of personal defects with the others! 🤦🏻‍♂️😂🤷🏻‍♂️” 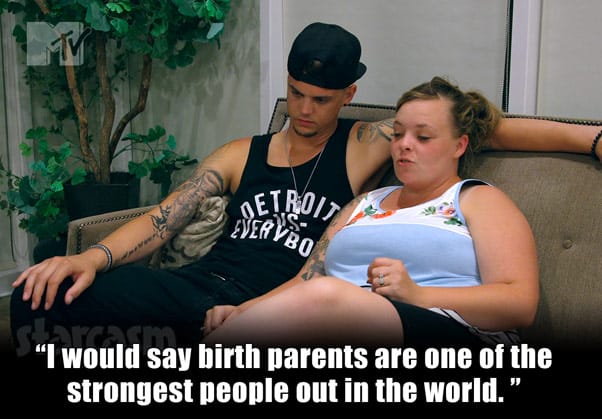 Perhaps Catelynn and Tyler will be given an opportunity to defend themselves on the upcoming Reunion? Unfortunately, fans will have to wait to find out because the first part of the Teen Mom OG Reunion does not air until September 2. Next Monday night MTV will be airing an “Unseen Moments” special.