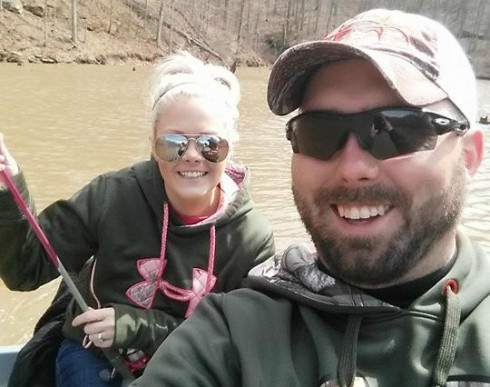 Congratulations are officially in order for Teen Mom 2‘s Miranda and Corey Simms: Hours after the first reports broke about how they are expecting a baby, the couple confirmed the news with a cute Facebook post.

“An extra pair of boots will be running around our house because Baby Simms will be on the loose,” they said on a picture that showed two pairs of boots and their first ultrasound.

Corey and Miranda added the new addition to the family is due in January 2016, which is about one month after older sisters Ali and Aleeah turn six. The twins already have a younger sister by mom Leah Calvert and Jeremy Calvert, so they’re pros at the big sister thing by now!

By confirming the news, Corey is apparently the last dad from Teen Mom 2 to have a baby with someone else: Jenelle Evans’ ex reportedly had another baby a few years back, Adam Lind has another daughter and Jo Rivera is currently expecting his second baby. Corey’s case is a bit different because, not only will this be his third child, but he is also the first who is married to the mother of his latter child.

There is little doubt Miranda’s pregnancy will be mentioned in the upcoming season of Teen Mom 2, which premieres on July 9. Before then, catch up with the rest of the ladies in a June 22 special.