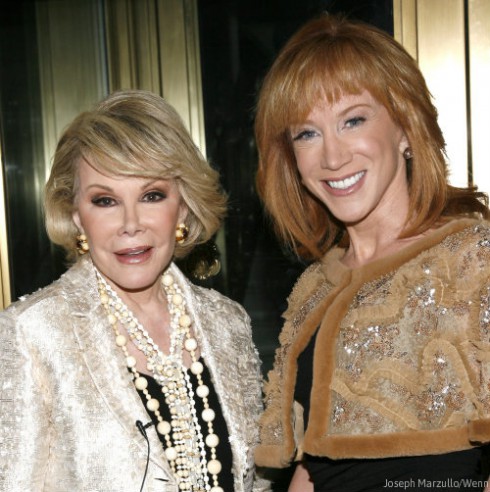 “Not only was Joan a trailblazer, she was also a dear friend and mentor to Kathy, who will no doubt continue her legacy and do the series justice by bringing her own unique comedic style and tell-it-like-it-is personality to the host chair,” said Jeff Olde, E! Executive Vice President of Programming and Development.

But, just months later, about everything relating to Fashion Police seemed to go south when Giuliana Rancic made an ill-advised comment about Zendaya’s hair. Days later, long-time co-host Kelly Osbourne’s departure from the show was announced — followed two weeks later by an announcement from Kathy that she was also quitting. She said in part…

I am a freedom-loving female and gay rights activist who loves to find the funny in all people, attitudes, beliefs, and appearances, but only when the context permits intelligent humor. I thought I could bring my brand of humor to Fashion Police so that the beautiful people in beautiful dresses could be teased when appropriate. My brand of humor, while unrepentant and unafraid, is all about CONTEXT. There is plenty to make fun of in pop culture without bringing people’s bodies into it… But I do not want to use my comedy to contribute to a culture of unattainable perfectionism and intolerance towards difference… After seven episodes of Fashion Police, I discovered that my style does not fit with the creative direction of the show and now it’s time to move on.

A few weeks later, Giuliana said she was hurt by Kelly and Kathy’s comments. Now it turns out she’s not alone.

“Just like a family, when the matriarch dies, the sisters started fighting, someone tried to marry in, not a great match, live and learn,” Melissa Rivers said 92nd Street Y. She added specifically of Kathy, “I’m just going to say, it wasn’t a match on a lot of levels. My biggest complaint was the feeling that she kind of s**t all over my mother’s legacy in her statement on leaving.” (Melissa’s comments on Fashion Police start around the 20-minute mark.)

“I know everything was so heightened and everybody was so crazy, but that was my takeaway,” Melissa diplomatically added. “I know that was not an intentional reading of it, but that’s how I felt. By calling the comedy and the style of it old-fashioned – it was like, I understand what you were doing, you’re trying to save yourself, but don’t crap all over my mother to do it.”

Even though she felt offended by Kathy’s exit, Melissa said everyone still involved with Fashion Police is ready to move on when new episodes premiere this fall. When asked later about Melissa’s comments, Kathy indicated she felt the same way by declining to comment.