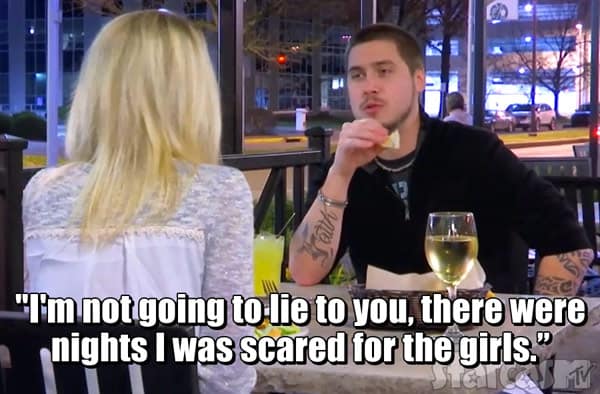 Things are moving super fast in the Teen Mom 2niverse! Thanks the MTV Movie Awards, we had two new episodes this past week, and now we already have four new preview clips for next week’s episode! Buckle up, put that texting device away, and let’s roll…

Javi has his last family dinner with Kail, Isaac and Lincoln I assume?) before heading out for his six-month deployment. Kail points this fact out to Javi, who says “Don’t remind me,” adding, “it’s sad.”

Isaac seems confused about the timing, and apparently didn’t think Javi was leaving until March.

“No, I’m leaving in a couple days dude,” Javi clarifies. “What?” Isaac asks as he starts to realize what Javi is saying and begins to get emotional.

Kail tries to put a positive spin on things by pointing out that Isaac will be talking to Javi on FaceTime, which means he will be getting to stay up late. Isaac doesn’t seem to impressed with the fringe benefits of Javi’s extended departure.

“I don’t want you to leave,” Isaac says, rubbing his eye.

Javi and Kail iterate that he will be coming back, and Isaac seems to take a little solace in that fact — and in the undeniable yumminess of a chicken finger.

The focus then shifts from Isaac to Javi and Kail, who still seem to be coming to terms with the reality that he is being deployed.

Jenelle’s clip kicks off with Jace revealing to Jenelle that he’s having issues falling asleep in class. “Well, you gotta practice staying away,” Jenelle advises.

At this point, Kaiser goes on an adorable cup-tossing freak out that sends Babs into an infectious fit of cackling.

After the cackling dies down, Jenelle reveals she is planning on heading to New York with boyfriend David Eason and a couple of friends for the weekend to celebrate her birthday. Babs inquires as to who will be watching Kaiser while Jenelle is out of town, and Jenelle says that David’s sister will be staying at their house and taking care of him.

Babs asks how things are going with Jenelle and David. “Well, things have been going pretty perfect,” Jenelle says. “I mean, we don’t argue.”

“Wow! That’s nice,” says Babs. “Is that nice? Or do you miss the arguing?” she asks and laughs loudly.

“No,” says Jenelle — not laughing.

“And what do you do about the other one? The Nathan?” 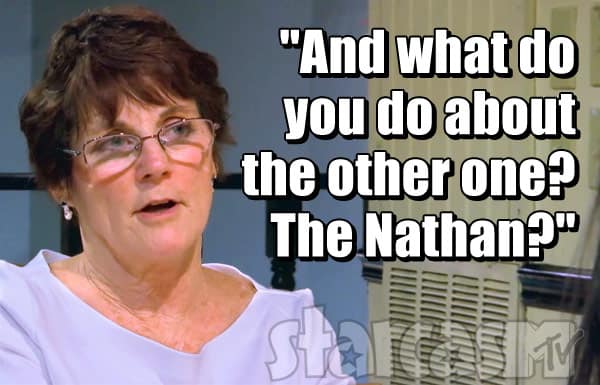 “Well don’t you think that you maybe should let him visit with him eventually?” Babs asks, nodding towards Kaiser.

“I mean, yeah, but I want him to set it up with the courts,” says Jenelle. She then reveals to Babs that her attorney wants her to sign a custody agreement with Nathan in order to motivate his girlfriend Jessica Henry to drop her assault charges against Jenelle.

Babs then gets the details on Jenelle’s charge, which is misdemeanor assault and battery — a pretty serious charge when it comes to trying to find a job. “I would tell [your attorney] Amy, say, ‘Look, this is the deal. If you get the charges dropped, then I will do a visitation paper with Nathan. But I want the charges dropped first.'”

“I feel like I’m using my son to get out of trouble,” Jenelle says, “and that’s not right. It’s not my son’s problem.”

Leah and her ex, Jeremy Calvert, meet up for a “dinner date” to talk things over. After Leah and Jeremy kick off the clip laughing with the waiter, things get pretty serious pretty quick — at least for Jeremy.

“I have a question,” Jeremy says,” Do you ever wish you had listened to me one time?”

Leah is still laughing as she responds: “Well, I have a question for you: Do you ever think you would have listened to me one time?”

Jeremy considers this for a moment. “You buzzin?”

“I’m a little bit, because I don’t ever drink,” says Leah.

Leah laughs (flirtatiously?) and says “You can’t see it!”

“Yeah,” says Jeremy as he stares out at the road. “You’re blacked out after the bottom of that glass.”

“I drink a lot,” Jeremy responds.

Leah then gets serious again. “There’s no excuse for, you know, the mistakes I’ve made. But, I wonder where we would be had we been together through my treatment.”

Leah starts to get angry. “When I wasn’t doing good!”

“You’re damn right. I was scared.”

“You was in a big, big, black dark hole,” Jeremy agrees.

“But I feel like you regret not waiting to —”

“Yeah, in a way, because it’s kind of [inaudible] for my daughter, yeah.”

“So we shouldn’t have just gave up,” Leah concludes.

Aubree talks with her grandmother Mary about Cole marrying Chelsea and becoming her dad. Initially, Aubree seems to be just acting silly and not really caring about the conversation, but things change quickly when Chelsea’s mom brings up playing with dad.

“Do you like Cole? He’s really nice to you, right?”

“And you play games and all that stuff that dads do, right?”

Aubree stops the squealing. “Except my real dad. He doesn’t play with me.”

Mary seems completely stopped in her tracks. “Well. Yeah, but —”

“Cole Will,” Aubree chimes in.

“Unless it’s too late,” Aubree answers.

Mary affirms Aubree’s answer, then adds: “I’m glad you have somebody to play with ya, because you’re pretty fun I think!”

The clip for next weeks episode kills my heart. I love my sweet girl, and I'm so grateful for Cole.

Be sure to tune in for the full episode of Teen Mom 2 airing Monday night at 10/9c on MTV!