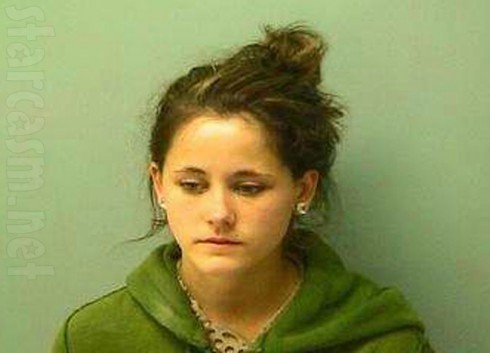 Foul-mouthed firecracker and star of Teen Mom 2 Jenelle Evans made headlines once again yesterday when a graphic video of her fighting another girl made its way to the internet.

In the beginning of the 90-second clip Jenelle declares, “It is my business. You invited me up here Britney! You’re such a stupid b!tch. You sit here and talk sh!t. You’re such a s!ut,” before being shoved into Britney by a friend. Soon after that Jenelle cold-cocked Britney in the face and all Hell broke loose, resulting in the two girls wrestling in the grass with Jenelle repeatedly punching the girl in the face as her friend cheered her on.

There has been a good deal of debate as to whether or not Jenelle would be facing serious jail time for the assault, but instead of the dispute being settled in a courtroom the two young ladies settled the new-fashioned way – on Facebook! Here is an exchange between the two combatants in which Britney reveals she will not be facing charges and the two laugh it off and agree they need to concentrate on raising their children. (I guess Britany Truett is a teen mom as well) 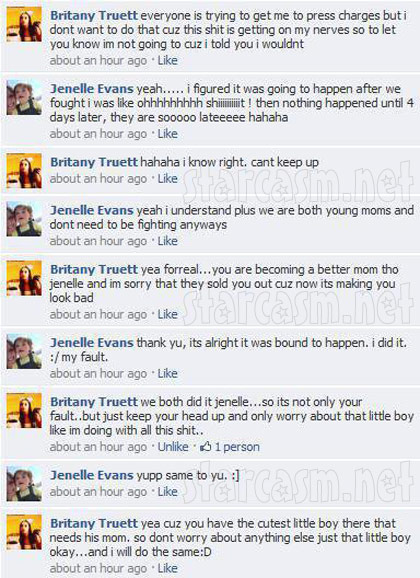 (What do you bet Jenelle offered Britany a puff on an Oak Island peace pipe?)

From what I can piece together from Jenelle’s friends’ comments the incident took place a couple weeks ago and was recorded by Jenelle’s friends, who turned around and sold the video for $$$.

I only hope Jenelle got a cut. Oh, and Britany too. I would think that getting the crap beat out of you in a viral internet video would have a pretty high price tag. Then again, I think I may be overestimating the value of dignity.